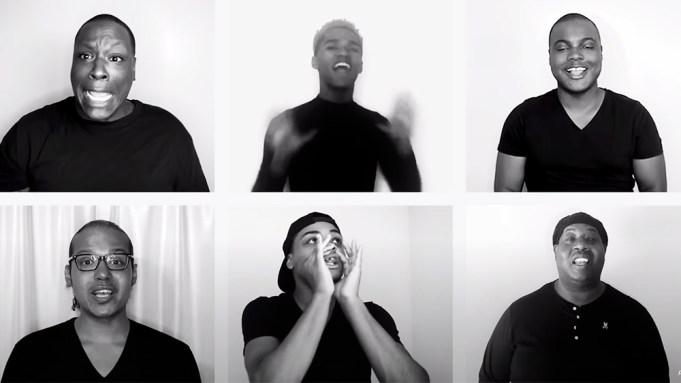 Former contestants from “RuPaul’s Drag Race” came together in a PSA video to address the longstanding issues of racism within the “Drag Race” fandom.

In the black-and-white video, six former “Drag Race” contestants appear sans makeup, wigs and costumes, stressing the fact that they are real people underneath the glamor and “eleganza” of their drag personas. After introducing themselves with their non-drag names — Trevien (aka Heidi N Closet), Tim (aka Latrice Royale), Dequan (aka Mayhem Miller), Ray (aka Widow Von’Du) and Tony (aka The Vixen) — they talk about their lives outside of drag as husbands and aunties, hair stylists and people who enjoy pineapple on their pizzas and getting tattoos. (Former contestant Mariah Paris Balenciaga also appears in the video, but the video doesn’t include her non-drag name, Elijah.)

Following the introductions, the former contestants detail their experiences of racism outside and within the drag fandom, emphasizing a call to action for love, unity, compassion and making the show an example of how to be better allies.

“We need to collectively stop the threats, stop the racism that is affecting this community,” says Von’Du.

The announcement was released through the lens of The Trevor Project, a nonprofit organization focused on suicide prevention for LGBTQ youth, and emphasized the intersectionality of race and queerness within the drag community.

This is far from the first time the issue of racism and “Drag Race” has come up. In July, Season 11 contestant Honey Davenport released a video on Instagram made in collaboration with fellow contestants of color who shared their stories of racism from the drag fandom, and white allies expressing their support for marginalized communities in drag. Queens of color on the show have received death threats and racial slurs from fans while on the show.

“It’s very evident within the fandom that there’s this hierarchy of queens, and, of course, Caucasians are at the top of that list,” Season 11 contestant Kahanna Montrese said in Davenport’s video. “Queens of color come right at the bottom.”

The queens stressed that the show is simply for entertainment purposes and that the hate speech leveled at contestants of color is unacceptable and damaging, interfering with their performances and making them fear for their livelihoods. They also urged future contestants of color to love themselves and remain resilient in the face of discriminatory comments from fans.