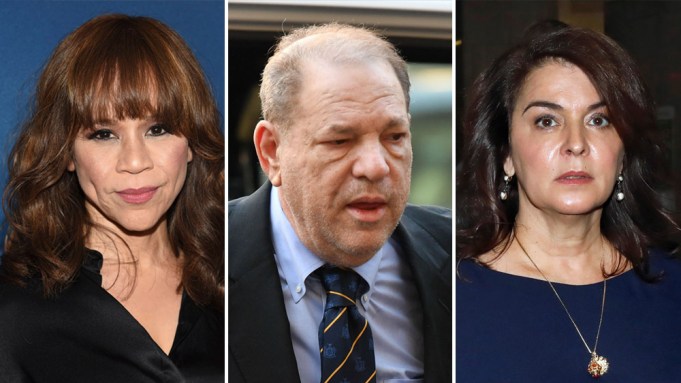 UPDATED: Rosie Perez took the stand at Harvey Weinstein’s trial on Friday afternoon to testify about her friend, actress Annabella Sciorra, who says Weinstein raped her.

Manhattan Assistant District Attorney Joan Illuzzi had requested earlier on Friday to bring Perez in as a witness, in an effort to bolster Sciorra’s claim that Weinstein raped her back in the early 1990s. Attorneys for Weinstein argued that Perez should not be allowed to testify, since the story is hearsay, but the judge allowed her to take the stand.

Perez testified that Sciorra had told her decades ago, in the early ’90s, that Weinstein raped her.

Perez said that around 1993, she had called Sciorra to ask if she wanted to go out to a nightclub. But when she called, Sciorra was talking in a strange whisper voice “as if she was hiding from someone.” Perez recalls Sciorra telling her, “I think something bad happened.”

“She said I think it was rape and she started crying,” Perez continued recalling the phone call. “I asked who did it and she said, ‘I can’t, I can’t, I can’t.’ I said what happened. She said I woke up on the floor and my nightgown was up.”

Perez suggested, on that phone call, that Sciorra call the police, but Sciorra said she couldn’t because she was scared and then she hung up the phone. “I tried to call her back all night long and I was so upset, but she wouldn’t pick up.”

A few months after that call, Perez connected the dots and realized that Weinstein was Sciorra’s alleged rapist.

Sciorra did not reveal Weinstein’s name as her alleged rapist during her initial call with Perez, but when Sciorra was in London filming a movie, she says Weinstein was stalking her and showed up to her hotel unannounced. Perez had heard about the incident in London, so she gave Sciorra a call, and Sciorra said Weinstein was harassing her in London and she was “scared he was gonna get her again.” Perez said, “When she made that statement, that’s when I put two and two together and I said, ‘He’s the one who raped you.’ And she said, ‘How did you know?’ And I said, ‘I didn’t know. You just confirmed my speculation.'”

Perez says that after the call in London, Sciorra made her promise to never, ever, ever talk to anybody about the situation, so they had not spoken about the alleged rape again until around the time that Ronan Farrow’s article about Weinstein was published in the New Yorker in 2017. (Both Perez and Sciorra spoke to Farrow for the piece.)

Lead prosecutor Illuzzi asked Perez about her conversations with Farrow, and Perez testified that she did not know exactly what was discussed between Farrow and Sciorra. When asked if she suggested Farrow call Sciorra, Perez replied, “I did not directly tell Ronan Farrow to call Annabella.” She then revealed that she told Nicolle Wallace, her former co-host on “The View,” that she should tell Farrow to call Sciorra. (Both Wallace and Farrow worked at MSNBC.)

Crying on the stand, Perez said she told Sciorra that she had told Wallace to have Farrow call her because she “betrayed her promise” to never tell anyone about what allegedly happened. Telling this story was the only moment of the hourlong testimony that prompted Perez to break out in tears.

On Thursday in court, Sciorra testified for six hours. She said Weinstein showed up announced in 1993 or 1994 to her Manhattan apartment, barged into her home, unbuttoned his shirt, threw her on the bed, held her hands down and raped her. Sciorra says she tried to fight back, but she lost the fight, as her body began shaking in response to the attack, as if she were having a seizure. She said she does not remember what happened after, but she woke up on the floor with her nightgown, which was a family heirloom, around her waist.

Weinstein’s defense said in court that Sciorra’s story is not true, and Weinstein has maintained that all sexual relationships with any woman was consensual.

Today, Weinstein’s attorney Damon Cheronis cross-examined Perez, and her re-telling of the story remained consistent, while the lawyer attempted to poke holes in her testimony.

Cheronis repeatedly questioned the source of Perez’s detailed information about the alleged rape, seemingly suggesting that she didn’t talk to Sciorra about the incident in the early ’90s over the phone, but rather, she knew Sciorra’s story by seeing the news about her testimony yesterday or by reading Farrow’s book, “Catch and Kill.” Perez said she did not watch the news or read about Sciorra’s testimony on Thursday, and she said, “With all due respect, I didn’t read the book.”

Weinstein’s attorney asked Perez why she attended premieres for movies produced by The Weinstein Company over the years, if she knew that he allegedly raped her friend. Perez said, “Everybody did,” and noted that she didn’t interact with Weinstein at any of the largely-attended industry events.

Weinstein’s lawyer questioned why Perez didn’t immediately go to Sciorra’s home after she told her on the phone she was raped. “I didn’t go over there because she hung up the phone and she was very upset and I was very upset,” Perez said, adding that she tried to call her over the next couple of days, but she didn’t want to talk about it. “I left it at that because it was very traumatic for her,” Perez told Weinstein’s attorney. “It was so traumatic for her that I was trying to be respectful.”

Perez was on the original list of people who may be called in as a witness or referenced during the trial, along with other notable names, including Charlize Theron and Salma Hayek. (Neither Theron nor Hayek have been called to testify.)