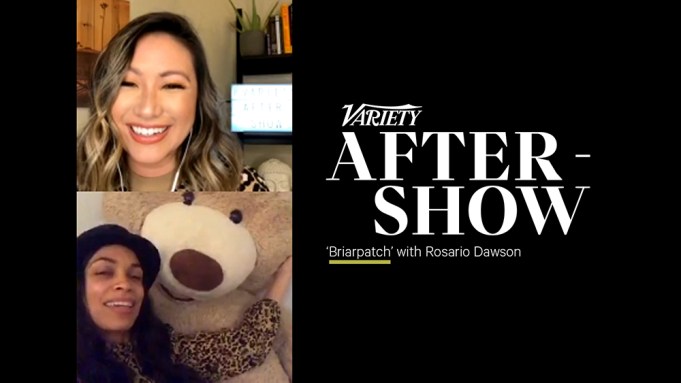 Rosario Dawson may have just ended her run as Allegra Dill on USA’s “Briarpatch,” but she already has her sights set on the future, specifically, two major sci-fi franchises — and, possibly, politics.

“The two universes, ‘Star Trek’ and ‘Star Wars.’ I get in those two, I’m telling you, man, that’s it. I will just retire. And then I can just concentrate on going to school and running for office. That would be it,” Dawson revealed to Variety on the “Variety After-Show.”

While it was reported that Dawson is already set to show off her Force powers as Ahsoka Tano in Season 2 of “The Mandalorian,” the actor was tight-lipped on joining the Disney Plus series, though she credited fans for fueling the momentum for her casting.

“That’s not confirmed yet but when that happens, I will be very happy. I’m very excited for that to be confirmed at some point,” she said, adding it would be “a million and one percent because of the fans.”

As for “Star Trek,” Dawson admitted she would be happy to be a background Romulan or Vulcan, although she said her father gave her the idea of playing a different role: Q, the omnipotent being seen across various “Star Trek” series.

“I mean it would be great ‘cause then I could jump on ‘Discovery.’ I could be on ‘Picard.’ I just want to be with Jean-Luc Picard,” said the self-proclaimed Trekkie.

It would be a departure from her most recent role in “Briarpitch” as Dill, the gritty investigator who returns to her small (and corrupt) Texas hometown of San Bonifacio to help solve the murder of her younger sister. The series was based on the book of the same name by Ross Thomas, the protagonist of which was originally a white man.

The neo-noir series, originally conceived as an anthology, has not been confirmed for a second season, although Dawson said she would happily return to the character.

“It felt like doing theater, you know, where you do so much, and it’s only there in that one moment. And then it’s gone,” said Dawson of the show’s 10-episode run, the finale of which culminated in (SPOILER) Dill solving her sister’s murder, grappling with her own culpability in abandoning her as an adult and driving away from San Bonifacio, likely forever.

In 2018, Dawson told Variety about her political aspirations and possibly running for office. It’s still an option, she said. She has been holding live sessions on her Instagram with boyfriend, New Jersey senator Cory Booker, to help answer questions about the stimulus package the Senate recently passed in light of the coronavirus pandemic (the two are currently on opposite coasts, although Dawson does have an oversized teddy bear named “Bae,” who wears a Cory button, in his honor).

“Are people having to lose their homes over this? Are people able to have the safety gear that they need? Are people able to keep paying their rent? Are people being paid a living wage? Do people have access to healthcare?” said Dawson. “It’s a really critical moment, I think, for people. If you’re feeling bored, to understand that that’s a privilege ‘cause there’s a lot of people in severe alarm right now.”

Watch the full interview with Rosario Dawson on the “Variety After-Show” above.