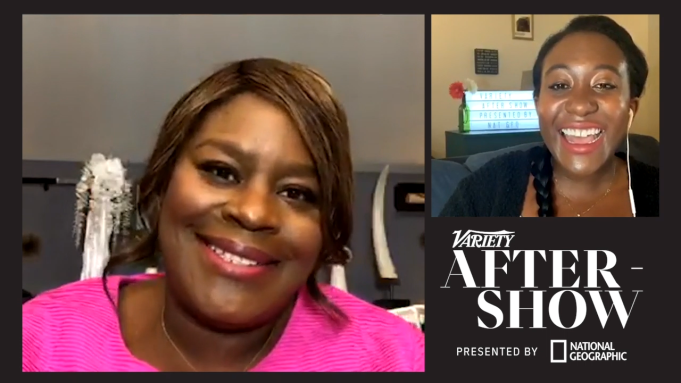 (SPOILER ALERT: Do not read ahead if you haven’t watched the Season 3 finale of “Good Girls.”)

The third chapter of Beth, Ruby and Annie’s story came to a close when Season 3 of “Good Girls” wrapped up on Sunday night. Though NBC ordered 16 episodes, the show about good girls gone crime bosses ended its run early after the coronavirus pandemic shut down production.

While airing the season’s 11th episode as the finale wasn’t the most ideal situation, star Retta says the timing for the “early finale” worked out about as fortuitously as possible.

“Obviously people knew we were supposed to do 16 [episodes], so we had five more to do. We were one scene shy for episode 12, so we’re like, ‘Ugh, hate that we can’t at least get that out,” Retta says, joining the Variety After Show, sponsored by National Geographic, after the episode aired. “But oddly enough, because it ended the way it did in the park … at least it gives it a little button that works for an ‘early finale.’ ”

Retta is referencing the final scene of the episode, where Agent Donnegan (played by Lauren Lapkus) confronts Beth (Christina Hendricks), Ruby and Annie (Mae Whitman) in the park, where they are celebrating the fact that things seem to finally be working out in their life of crime — they have a new base of operations for their money printing and laundering operation and a hitman is finally locked in to whack their dangerous boss Rio (Manny Montanta). Though Donnegan comes off innocent yet awkward to the women, the audience knows she’s an FBI agent hot on their trail.

The third season’s final hour also features some major marital drama for Ruby and her husband Stan (Reno Wilson), as both of their shady business dealings have put further strain on their family and their relationship.

“I literally have a problem when I read that, you know, we’re gonna have issues in the episode. I’m like, ‘Ugh, I don’t want to have to do it,’ because I get anxiety having to perform it because I want there to always be love with the Hills — or, as some people call us, ‘Stuby,’ ” Retta explains. “[But] as [creator Jenna Bans] always says, ‘It makes for good TV.’ … You have to have some conflict. That’s what stories are about essentially. So, it’s hard when the conflict’s gotta be in the Hill household for me. … I like the show, I like the storytelling and so I tend to get worked up about it anyway.”

And though the future of “Good Girls” is currently uncertain (since the show hasn’t been officially renewed for a fourth season), Retta has some idea where the story is headed.

“If we get picked up, we will finish the five [episodes] that did not air because I know that’s how Jenna wants the story to go,” she says.

Retta also revealed that, before plans changed due to the shutdown, Whitman was set to make her directorial debut with the season’s 14th episode.

“It was supposed to happen,” Retta says. “I presume that they’ll go right into it [in Season 4]. She may not want it because it will be the beginning of the season and depending on how she feels [with] preparing for it, she may push it or whatever. But yeah, she was supposed to do the next one.”

As for what happens in those five episodes the “Good Girls” didn’t complete, Retta can only guess about what’s to come, since she hasn’t read past the 13th script.

“I have a little bit of anxiety about the scripts that I haven’t seen and I have specifically not asked [Bans] about it because I do want the answers,” she explains. “I like to see it in real time and I don’t want it floating in my head, but I have an idea of stuff that’s coming and yeah … it’s going to be intense.”

“Keep hope alive that there will be a Season 4 so that we can actually get these last five to you,” she says to the “Good Girls” fans. “I feel hopeful in that regard. And I feel like if we get to go there, knowing the direction we were going in Season 3, if we get to go do Season 4, it’s gonna be bananas.”

It was already a big week for Retta, who also reunited with her “Parks and Recreation” co-stars for a special episode of the beloved comedy that ultimately raised more than $3 million for Feeding America’s COVID-19 relief efforts.

“It’s nice that you can do something even though you feel like you can’t do anything. For that to be such a big deal and all I had to do was set up an iPhone in my closet, that’s pretty amazing,” she says of filming the special. “That goes to how strong that fandom is and the heart of the show and it bringing people to a place to actually give.”

“Good Girls” Season 3 is available to stream on NBC and Hulu. Seasons 1 and 2 are available on Netflix.