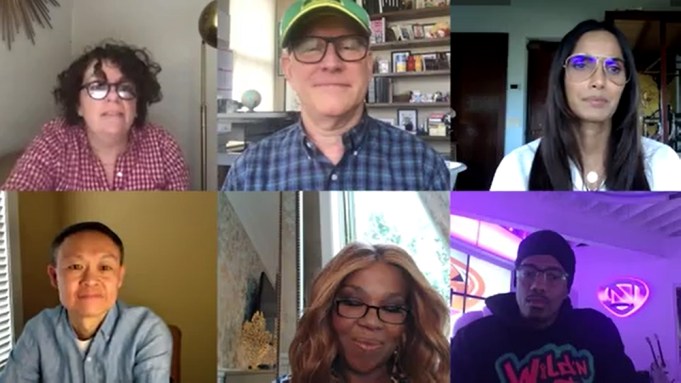 During the wide-ranging discussion, Scott-Young and Cannon talked about their shows’ roles in launching the careers of Cardi B (VH1’s “Love & Hip-Hop: New York”) as well as Kevin Hart and Pete Davidson (MTV’s “Wild ’N Out.”) Scott-Young, a former music manager, said “Love & Hip-Hop” found Cardi B because of her popular Instagram account, and that she realized quickly that the current multi-platinum recording artist has that “intangible factor.”

“When you met her and her unfiltered sense of humor and clear sense of self, I knew that she was destined,” Scott-Young said.

Cannon called “Wild ’N Out” a “no-holds barred environment,” where Katt Williams also thrived — and that Williams, Hart and Davidson all “know who they are” as comedians. “You want people to be fearless,” Cannon said, “especially in a time like this, where we need our voices to be strong and unapologetic and unedited.”

The coronavirus-imposed production shutdowns haven’t entirely squelched new reality shows, and Lee and Barbato talked about creating content remotely. Barbato said the logistics of putting together the finale and reunion episodes of “RuPaul’s Drag Race” were “nerve-wracking,” but they worked through it successfully with VH1. The queens were “very sad” about not doing the usual “big extravagant productions,” Barbato said, with the additional complication that “Ru’s not a big fan of bringing a camera into his house.”

“We’re very fortunate that the drag queens are incredibly adept,” he said.

TLC recently remotely produced a reunion tell-all for “90 Day Fiancé: Before the 90 Days,” and several self-shot shows during the shutdown, including a “90 Day” spinoff about quarantine. Lee said the network talked to talent about who wanted to participate, and then sent out equipment to those who did. “I was pretty amazed by how much they just wanted to seize the moment,” Lee said.

“Some of it can look sloppy; some of it is just not perfect,” Lee said of self-shot footage. But he noted that the audience is there: The “Before the 90 Days” tell-all was No. 1 in its timeslot that night.

For Lakshmi, the premiere of her new Hulu show “Taste the Nation” also coincided with the Black Lives Matter protests that have swept the United States. So Lakshmi asked Hulu to offer the episode “The Gullah Way” — about the cuisine of the Gullah Geechee in South Carolina — for free on YouTube.

“While obviously African Americans aren’t usually considered descendants of immigrants, they are a product of forced migration,” Lakshmi said. “I probably did more research for that episode than I did for any episode.”

Hovering over the conversation was the question of when more standard forms of production might resume again. Scott-Young said even though Atlanta is open for production now, and “Love & Hip-Hop: Atlanta” could start there, her company is being cautious “for the safety of our crew and our cast.” She thinks the “New York” edition will take the longest to get up and running.

Scott-Young said coronavirus and the protests will surely figure into the next seasons of “Love & Hip-Hop.” “For us as Black people trying to stay alive, we’ve got multiple enemies that we’re battling right now, not just the coronavirus, but stepping out of your house to take a jog or go to a Wendy’s.”

As for physical production, her company is coming up with its own protocols, in addition to the network’s and state-mandated ones. “We’re going to have to reimagine the way we make the shows, not just in content, but in process,” Scott-Young said, but also promised “some short turnaround production things.”

Barbato said his company’s shows are “in the same spot,” but they do hope to resume this summer “in a very different and cautious way with smaller crews.” He added, “We might be able to save some money there, but you end up spending a lot more money than other places,” because of the costs of COVID-19 precautions.

Lee said TLC is looking state by state at what’s allowed — and what’s safe. “Because trust me, the moment something is allowed to shoot, if the crew’s comfortable, we’re going to shoot,” he said. “Because we all want to start getting back in the field, and making the product and making art. That’s what we all live for.”

According to Lakshmi, “Top Chef” faces huge challenges in re-mounting because of the size of its production — she approximated there are 150 crew members, with “anywhere from 10 to 14 cameras going at once.” She said there will have to be a number of new “sanitary issues and code issues,” and that she and Tom Colicchio, the show’s head judge, surely won’t share food anymore. “We’re going to have to be creative about first and foremost, protecting our cast and crew, but then finding a way to make the competitions still compelling,” she said.

“We’re actively talking about it, because what everyone will tell you is that everyone wants to film before there’s a rebound of COVID in the fall,” Lakshmi added, after which everyone groaned.

Cannon was the only panelist with concrete plans to begin shooting again, both for Fox’s “Masked Singer,” which films in Los Angeles, and MTV’s “Wild ’N Out,” which films in Atlanta. The question for those shows — which both shoot on stages in front of live audiences — is how big of a crowd they can gather. “We’re definitely set and ready to go for production, but we have to abide by the mandates that are set, which haven’t been set as of yet.”

But both shows will shoot this summer, Cannon said. As for how that will happen, he said, “We’re taking it day by day.”