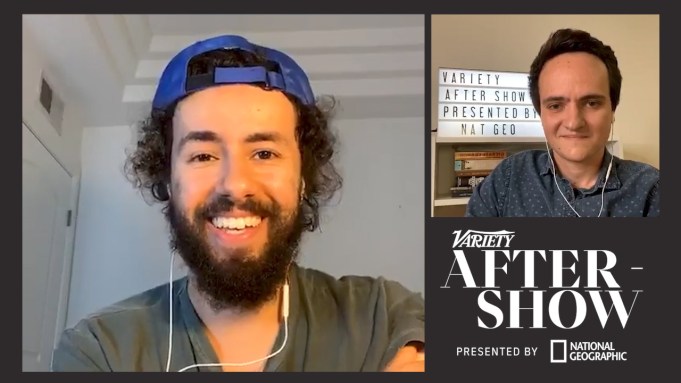 Much like many other producers and showrunners, Ramy Youssef has spent his quarantine editing remotely, frantically trying to finish Season 2 of “Ramy” on time.

Youssef submitted the final locked episodes on Tuesday, only three days ahead of the launch on May 29, and discussed the “intense experience” on the “Variety After-Show,” presented by National Geographic, on Instagram Live.

“It’s been a lot to get it done during quarantine. I’m super appreciative of all the people who are editing things out of their homes, and I just imagine everyone mixing sound and editing and color, doing all these things as they’re questioning their marriages,” Youssef joked.

The big addition to the Hulu show’s sophomore season is two-time Oscar winner Mahershala Ali, who plays the calming sheikh figure to the selfish, mistake-prone Ramy.

Youssef praised Ali for not “bringing his Oscars to set and showing us what’s what,” and described how he “leads by listening” on set.

“He called me, just on the vibe of, ‘Hey, I’m a practicing Muslim as well and really appreciate what you’re putting out,'” Youssef said. “Then it just turned into us hanging out and, of course, I had to ask if he wanted to be on it.”

Through the sheikh and his daughter Zainab (MaameYaa Boafo), Youssef introduces a discussion of colorism in the Muslim community, which he viewed as “important to highlight.”

“I think there’s this dialog that white people are the only ones being racist, or the only ones who are operating from prejudice, and I have always said that’s not true,” Youssef said. “There’s a lot of anti-blackness in the Arab community, white people are just the best at it, they’re the most professional at institutionalizing it. But everyone’s certainly trying to play the game. It really needs to be addressed and so for us to show our characters going through that, dealing with that, I think was important for the humanity of the characters of Sheikh Ali and Zainab.”

Later in the conversation, Youssef revealed that there was supposed to be another new, highly recognizable face in Season 2, however, things didn’t quite go to plan.

“We cast Lindsay Lohan in it, I had a great convo with her. I thought she was coming, she was on the call sheet, we were kind of prepped for it, and I’m not sure where she was. I knew she was in New York, and I was like maybe she went back overseas? But the time I did get to talk to her was great, she was such a cool person. I felt like we connected and then I didn’t hear from her,” Youssef explained. “So I’m looking forward to getting her involved moving forward because I’m a huge fan of her work and I think that she’s due for a return, a renaissance any day now and so I’m excited to be part of that hopefully inshallah.”

Next up for Youssef is an Apple TV Plus series he has in development with his “Ramy” co-star and close friend Steve Way.

Youssef said the prospective show will star Way alongside a “predominantly disabled cast and their families.”

“The show with Steve is so exciting to me because I think when we talk about making ‘Ramy,’ so much about it is we’ve never seen fully fleshed out Muslim characters; they’re only in the context of violence or maybe they’re only a side character or something like that. It’s even more true for disabled characters. We’ve never really seen them in their own environments and in their own communities in a comedic context, where it’s not a story that’s framed around someone else’s story, but really their own, and from their voice,” Youssef said. “It’s looking at what that means to be disabled and to still want to figure out how to be independent. It’s contradictory, in a sense, because there is this level of dependence you have to have on somebody, but I think that’s where we’re all at. Any of us who think we’re actually independent, we do still depend on other people. So to get to see that played out with these characters is really exciting.”

Youssef is hoping to get that series picked up, as well as a third season of “Ramy,” for which he has plenty of ideas for.

“I’m so exhausted after making Season 2, and we finally delivered it three days ago when we were done with notes. I had an Apple note thing on my phone with Season 3 stuff, but now I’m like, ‘Dude, I’m ready in a way,’ but I also want to take like three weeks off and chill.”

Watch the full interview with Ramy Youssef on the “Variety After-Show” above.