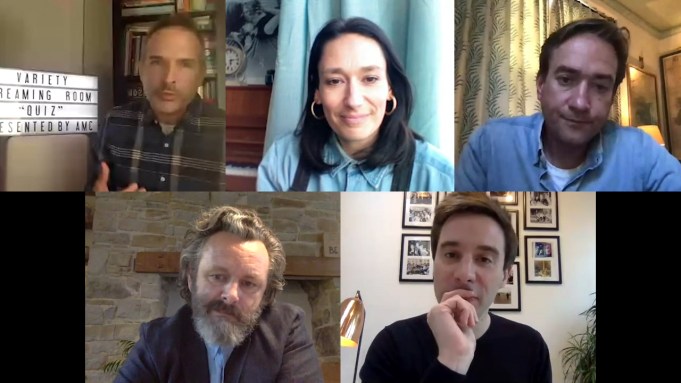 In 2001, the game show “Who Wants to Be a Millionaire” was a global TV phenomenon. And in the U.K., where the show had originated, there was such a frenzy for “Millionaire” that a large underground network of fans communicated ways to game the system and become a contestant. Around the same time, English former army major Charles Ingram, along with his wife Diana and alleged accomplice Tecwen Whittock, became notorious after they were accused of cheating their way to a million pounds on the show. Almost two decades later and the infamous scandal is re-created in the AMC limited series “Quiz.”

After an exclusive premiere screening of the first episode, stars of the upcoming series Matthew Macfadyen, Sian Clifford and Michael Sheen, along with writer and executive producer James Graham spoke with Variety senior editor Michael Schneider in the Variety Streaming Room to discuss the show’s success and reliving the infamous scandal.

“It’s basically ‘Oceans 11,’ but with really middle-class English people using encyclopedias instead of guns,” Graham told broadcasters when he first pitched the series. “It’s geeks and dweebs who are using general knowledge to steal the million from a bank vault.”

The alleged methodical plan to outsmart the popular game show garnered massive media attention around the U.K. at the time (but less so in the U.S., as it coincided with the 9/11 terrorist attacks here), and catapulted the Ingrams into the public eye. When writing about the history of the scandal, Graham grappled with detailing both sides of the story that would make audiences rethink the supposed scam.

“We saw it as an audacious heist, and you’ve got all of the elements there allegedly,” said Graham. “Because one of the difficult things is, of course, the whole premise behind the show is that you want to maintain the possibility that they didn’t do it.”

Clifford, who plays Diana, said one of the other intentions while filming the series was to also depict the Ingrams, whose lives had become so sensationalized by the media, with a fresh eye.

“I think humanizing them was the number one thing…I forgot at the time that there was a human cost in this story, but they were, as James said, they were excellent pantomime villains, and they were very easy targets,” said Clifford. “And the perception of them and the truth of who they were and their lives and what they went through is massive.”

Although the cast did get the opportunity to meet the Ingrams on set, they remained focused on the script of the characters rather than fixating too much on their mannerisms or physical details. “It’s such a brilliantly written script, and that’s your guide, really, and also the actors you’re working with,” said Macfadyen, who plays Charles.

While playing his part as game show host Chris Tarrant, Sheen shared that he gained a new respect for the role of quiz emcee. “The way he runs the studio. His timing is the timing of the show, really, and he’s the one that keeps the kind of warmth with the audience and the guests, keeps the suspense and the drama,” said Sheen. “He’s sort of a master.”

“Quiz” has yet to premiere in the U.S. but has already achieved high ratings for ITV in the U.K., which could be a possible foretelling of its success in the states when it airs on AMC on May 31.

“Something about this story really captured the nation, and I think it’s because it’s normal people put in an extraordinary situation where it just tantalized the nation,” said Graham.