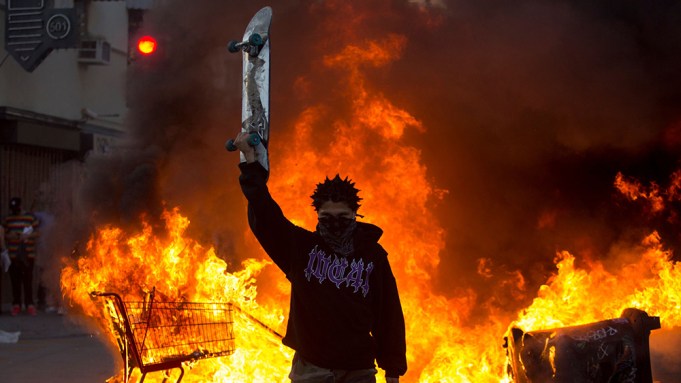 MSNBC anchor Ali Velshi usually gets to do his job from the comfort of a New York studio, surrounded by a helpful crew and the latest technology. On Saturday, he had to worry about being tear-gassed on the streets of Minneapolis.

Velshi, who has been delivering reports from the streets of that protest-torn city, was struck by a rubber bullet while covering the scene, just one of a number of mainstream press operatives confronted by new realities as they set about their job of trying to provide information to the public about a story that is more dangerous than the norm. Protesters have gathered in cities across the nation, ranging from Los Angeles and New York to Minneapolis and Salt Lake City, largely in reaction to the death of George Floyd at the hands of Minneapolis police.

I’m hit in the leg by a rubber bullet but am fine. State Police supported by National guard fired unprovoked into an entirely peaceful rally

Journalists covering it all found themselves the target of police tactics, having to work to evade being hurt or injured, and even confronted by crowds on the scene. Their travails, often captured on video that was then displayed on social media or even primetime network coverage, offered viewers an unsettling display of the danger that comes with being near violent settings, but also the erosion of regard for a profession that is typically considered a public service.

Reporters were susceptible, no matter their outlet. Leland Vittert, a correspondent for Fox News Channel, was chased by protesters early Saturday morning outside the White House as he worked to cover people gathering in Washington, D.C.’s Lafayette Square. The Huffington Post said in a statement posted on Twitter Saturday night that Chris Mathias, one of its journalists “has apparently been taken into custody while doing his job as a journalist.” The outlet said Mathias was released by police at about 1 a.m. Sunday morning.

UPDATE: HuffPost reporter Chris Mathias was released Sunday around 1 a.m. after being taken to the 72nd Precinct in the Sunset Park area of Brooklyn. https://t.co/GTp6FNhUyS

One of the challenges for journalists covering the outbreak is that they are part of a chaotic tableau. MSNBC showed footage of reporter Morgan Chesky trying to evade tear gas. As he moved, the network showed a group of people telling police they were members of the press. Michael George, a reporter for CBS Newspath, a CBS News operation that provides footage for affiliates, said he and a crew member were fired upon with plastic bullets in Minneapolis

An important thing to notice- we received no verbal commands from police before they opened fire with rubber bullets on our CBS News crew. If they had asked us to leave a particular area, we would. Also, police are aware the Governor has exempted media from the curfew. #cbsnews pic.twitter.com/7y6Trs6XrM

Signs of danger to journalists covering this story were evident Friday, when a crew from CNN was arrested in the midst of a live broadcast on the network’s “New Day” morning show. Correspondent Omar Jimenez and crew members Bill Kirkos and Leonel Mendez were taken into police custody right after they told authorities they would move to whatever location was best. The trio was released later after CNN Worldwide President Jeff Zucker lodged a call of complaint to Minnesota Governor Tim Walz, who later said the arrest was unacceptable. Later that day, protesters damaged CNN’s longtime headquarters in Atlanta, breaking windows and defacing a large red logo that is part of the facility.

The chairman of the Federal Communications Commission called for reporters at local TV and radio stations to be allowed to do their jobs. “Those who work for local television and radio stations are often putting themselves at personal risk to serve the public interest, and they must be allowed to do their jobs without being threatened or attacked,” said Ajit Pai. the head of the FCC, in a prepared statement Sunday.

The violence and apparent lack of regard for journalists by authorities has left some demoralized. “I’m fine,” said Velshi in a Twitter post. “My bruise will heal quickly, but social justice, the First Amendment and democracy have suffered deeply this week.”