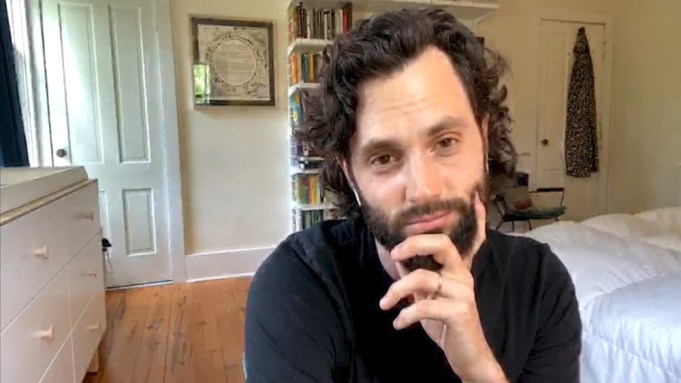 Fans of “You” know that there’s no telling what will come out of Joe Goldberg’s mouth. But sometimes neither does Penn Badgley, who plays the creepy serial killer on the hit Netflix drama.

In a conversation for Variety’s Actors on Actors issue with Chace Crawford, Badgley explained the voiceover process for the show, revealing that he will often riff when recording Joe’s omniscient observations.

“I think actually where I improv the most, ironically, is in the voiceover booth,” Badgley said. “I’ve developed a trust with the co-creators Greg Berlanti and Sera Gamble. They really trust me to go in there.”

Badgley said that he’s often by himself when he does the voiceover scenes. “I go in there alone, save the engineer and a co-producer, and I get almost no direction sometimes,” he said. “I just go through an entire episode, and we’ve not shot it yet generally — so as it comes out of my mouth, you realize there’s something about this logic. There’s often so many different layers of a moment: he’s saying one thing to the person he’s in the scene with; he’s thinking another about them; but also, this [other] person who maybe he’s killed and they’re in the trunk of his car. Meanwhile, he’s tweeting or texting or something to cover it up, and then he’s also thinking about what he’s going to do in the next scene.”

Sometimes that touch even goes so far as singing. “In episode six of Season 1, I was singing parts of the voice over and there’s a little bit of it that’s in there,” he said.

Badgley revealed that he thought this process was his biggest contribution to the character. “It’s almost like I’m a voiceover actor first,” he said. “And then, basically, the rest of the time I’m just staring.”

Badgley and Crawford, who starred together on “Gossip Girl,” reunited for Variety’s annual Actors on Actors issue, which celebrates the best TV performances of the year. Like Badgley, Crawford joined the streaming TV world as a superhero on Amazon’s “The Boys.”

For more from Variety‘s conversation with Badgley and Crawford, read our full story here.