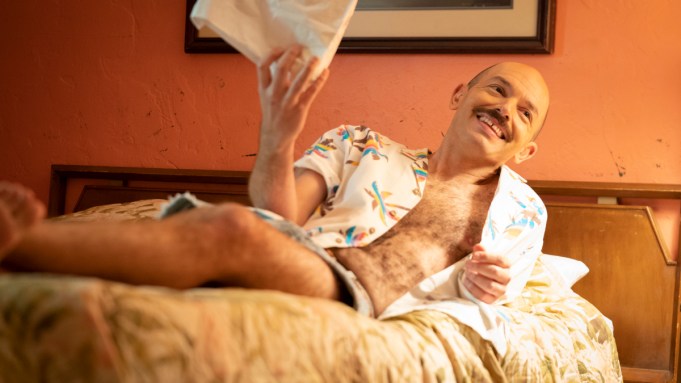 Just in time as Americans — and much of the world — settle indoors in the wake of the coronavirus pandemic, “Black Monday” star Paul Scheer has some TV series suggestions to check out.

For the inaugural episode of Variety’s “My Guilty Pleasure,” Scheer sat down with Variety senior editor Michael Schneider to reveal his (1) TV guilty pleasure; (2) the “deep cut” show you probably haven’t heard of but he recommends; and (3) his “show-mate” — in other words, the TV series he couldn’t live without. (Scroll down for the full video.)

Of course, as “Black Monday” returns for Season 2 on Sunday, March 15, it’s also a good time to catch up on the Showtime comedy. Don Cheadle, Regina Hall, Andrew Rannells and Scheer lead the cast of “Black Monday,” an irreverent take on a group of misfit Wall Street traders who help trigger the 1987 stock market crash. (Did we mention it’s now also inadvertently timely?)

The show is stuffed with 1980s-era gags but also has some really sharp, biting takes on gender inequality, racism, homophobia and many more subjects that are still relevant.

As Season 2 opens, Cheadle’s and Scheer’s characters are on the run and the people they left behind are dealing with the aftermath of the market crash. Scheer plays Keith, a stock trader with a secret that has now been unleashed.

“He’s out, and he’s proud, and he’s living in a world that he can shed everything that he’s had to hold inside for all that first season,” Scheer said of his character. “But at what cost? What consequences come with that? I think everyone’s dealing with that in the show, like, ‘Oh, I finally got what I wanted, but now where does that pay off?’ And not quickly, but these characters do kind of come back towards each other, and old patterns have to come back into play. So without getting too specific, yeah, he’s happy. And then he starts to be very unhappy again, based on situations that start to pile up.”

Scheer’s a pop culture junkie who also recently appeared on “The Good Place.” He does voices for “Big Mouth” and “Big City Greens,” among other shows; has a podcasting empire, starting with “How Did This Get Made;” and there’s at least a 73 percent chance he’ll pop up suddenly on anything you’re watching.

“It’s kind of like ‘American Idol’ if ‘American Idol’ took place in a dude from New Jersey’s basement,” Scheer said. “It was kind of this magical show. It was this amazing moment in time to capture people just being very earnest in what they were doing. It’s so wonderful to watch because everyone is doing their best. It is a stairway to stardom, and most people are still on that stairway. And that is totally fine. There’s something about the purity of it. We need more weird in our TV. We’ve gotten too glossy, our reality shows are too mean.”

“This show is mind-blowing,” Scheer said. “It’s not really sketch and it’s not a fully real show, it’s kind of in this middle ground where it’s parodying genre and commenting on a lot of different things in pop culture.”

“It was the perfect storm of everything before it,” Scheer said. “Here’s a show that’s shot on film and video, it had this look unlike anything on TV. And it showed you this backstage look at how TV was made but it was incredibly dramatic and it was the precursor to everything we love. I think you can see elements of ‘Curb,’ you can see ‘Fleabag.’ A mix of comedy and drama and the performances are amazing. It’s a special show and holds up really well.”

Watch the full video below: