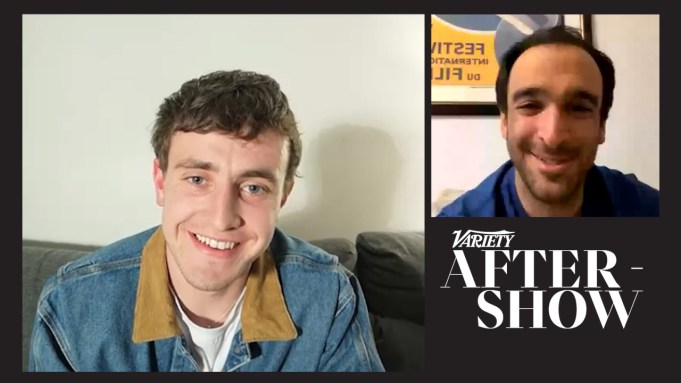 In ordinary times, Paul Mescal’s life would be dramatically different after starring in one of the buzziest TV shows of the year. But for the most part, not much as changed for the actor since Hulu’s premiere last week of “Normal People,” a sprawling love story about two Irish teenagers.

The 24-year-old Mescal is self-isolating in a flat in London, as the city is shut down due to coronavirus. But there are signs that Mescal’s life is about to quickly change. His agents are getting calls about new roles for the breakout actor, and he’s quickly amassed more than 250,000 followers on Instagram. Even more bewildering: a neck chain that his character Connell wears in the 12-episode series now has its own fan Instagram account.

“Normal People,” based on a 2018 novel by Sally Rooney, chronicles a first love between Connell, the shy popular boy in school, and Marianne (Daisy Edgar-Jones), his awkward but posh classmate. The series, co-directed by Lenny Abrahamson (“Room”) and Hettie Macdonald, has received rave views. And Mescal has drawn comparisons to everyone from Colin Farrell to Robert Pattinson.

Mescal, who is Irish, spoke on the Variety After-Show about his breakout role, the realistic sex scenes and the chain that has made the Internet so thirsty.

How did you audition for the role of Connell?

So what happened was, I was aware of the book prior to reading the book. And I was doing a play in Dublin at the time that the audition got sent to me by my agent. I saw it was going to be based on Sally Rooney’s book, so I quickly read the book before my first round of audition. And then, in terms of preparation, I was just trying to absorb the book as quickly as possible.

Yeah. I studied acting in the Lir Academy in Dublin, which is Trinity’s acting school. It was familiar territory, I suppose.

What scene did you read in your first audition?

The first round was one scene where Marianne’s eating ice cream. And then for the second audition, it was the same scene again. But that was when I first met Lenny [Abrahamson].

Did you have to keep coming back?

Those two auditions were before Christmas of not last year, but the year before that. And I felt like they had gone quite well. But it’s impossible to tell really. Then my agent got an email from a casting director being like, “Okay, Paul is the only boy called back for the chemistry reads, but it’s not an offer as of yet.” So that was kind of incredibly discombobulating, the sense that you think, “Okay, that’s very good news, but it’s not the news.”

When you auditioned with Daisy Edgar-Jones, who plays Marianne, I read that you knew she was the one for the role.

It’s very difficult to quantify why that is. This sounds odd, but it felt like Paul and Marianne were talking to each other rather than me and Daisy acting to each other, if that makes sense. It just felt quite natural and easy.

Did you first shoot the scenes where they were younger?

Yeah, so the first scene in the show was actually the first scene we shot on the very first day, that scene when Connell’s terrified of Marianne inside her house. It was probably useful from Lenny’s side of things that I was incredibly nervous on my first day, as was Connell. The first two weeks of the shoot were based at Marianne’s house. After that, it was a free-for-all. You were kind of jumping in between episodes. But we shot the first six episodes together and then the second six.

Why were you nervous when you started shooting?

I was nervous about delivering a character that I loved to an audience.

There’s been a lot of talk about Connell’s chain online. How did you find the right one?

It’s kind of like a Jedi choosing his lightsaber. Is that the right reference? No, it’s Harry Potter – the wand chooses you. I had initial conversations when we did our costume fittings because it was one of the details that I really liked about the book. It was like, “Oh, Connell wears a chain. Not a lot of people wear chains today.” I was really keen to see what that was, but it wasn’t there for the first fitting.

I remember when I came back again, Lorna Marie Mugan, who’s an incredible costume designer, had a selection of different ones. And that one just seemed really right, because it’s simple. But also, it’s a massive statement that I don’t think Connell is aware that he’s making.

And the statement is?

I don’t know. I actually don’t know what it is. I think it’s a real indication to his identity in some way that I can’t describe.

Were there multiple chains?

No, there was one chain that I wore. I didn’t take it off during the filming.

Did they have extras in case you lost it?

They had a backup, but it was never going to be used because I wore it at home — and not just for any reason other than it was more convenient to just wear it rather than take it off.

You wore it the whole time you were filming?

Yeah, I wore it the whole summer. I wore it actually before filming. I wore it in the lead-up to filming just because I liked it.

I did, and I think it is amazing. Probably the last thing I expected to garner a response was Connell’s chain. I find it baffling that I looked at the page this morning, and I saw 20,000 followers, which is so fun. I just think it’s hilarious.

And then you ended up not keeping the chain?

I gave it to Daisy, as a wrapped gift with photographs at the end of filming. And I’m going to come out on the record and not blame her for losing it. We came back to shoot the poster for the show, so I obviously had to get it back off her and wear it. And then it kind of got lost in the melee of costumes and stuff. But Lorna found it, and I think Daisy has it now.

So it’s been found.

You can call off the search party.

The book is very realistic in its portrait of love. How did you work with an intimacy coordinator in preparing to shoot the sex scenes?

Basically, me and Daisy rehearsed with Lenny for two weeks prior to filming. And on one of those days, Ita [O’Brien, the intimacy coordinator] came in to work with us and take us through her process of what a day on set would look like when we were shooting those scenes. And that was really useful because it took the edge off the anxiety when it came to shooting those scenes on the first day that we shot them.

Me and Daisy felt safe throughout the process. What we would do is Ita would check in with me and Daisy in our trailers in the morning. And then she’d ask if we were feeling okay and have a brief conversation. Then we would discuss the degree of nudity that would be required each and every day. And then after that, me and Daisy would arrive to set, and we’d block through the scene in sweatpants and a T-shirt. Then we would have a conversation, both myself and Daisy — and Lenny and Ita — about what we were comfortable with. And all those things were basically to give me and Daisy agency in the process and take away anxiety.

Did you watch the show with any family and friends? And did you leave during those scenes?

I did watch with my parents. It is an odd experience when you sit down and go, “Okay, Mom and Dad. We’re watching episode 1 to 4. And in episode 2, there’s a big ole sex scene.” But they were amazing about it, because they’re in a position where they knew this was going to be required from day one.

But I think ultimately, I would be much more embarrassed about if I thought that I had in some way been taken advantage of in the filming process — which was never, ever the case. I was able to look back and go, “Oh, these are scenes that I’m really proud of.” Yes, it is a bit odd watching it with your parents, but I think they’re done in a way that it quite fresh. And yeah, my family was able to sit and watch it.

How has your life changed since the show premiered?

I feel like my life is slightly different just in terms of conversations with my wonderful agents and discussing things that may or may not happen next. But in terms of a day-to-day basis, quarantine’s my best friend at the moment because there’s still a structure that hasn’t changed before or after the premiere.

My interest in music probably stems from my sister, an amazing musician who is 17 and just started releasing her own stuff. We talk quite a bit about music and taste. I played a little bit of piano, and I do really enjoy singing. I ordered myself a little keyboard for my flat during quarantine to kind of keep me occupied.