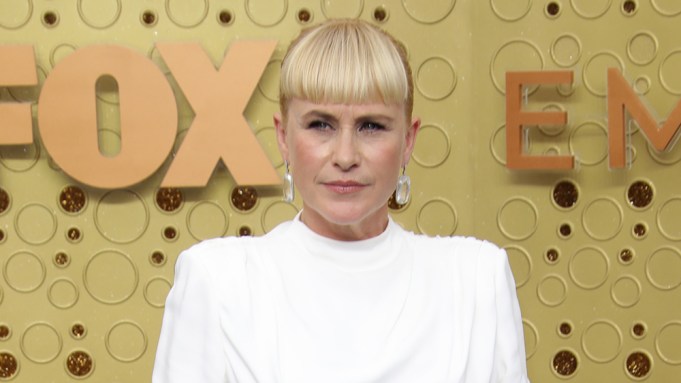 Golden Globe nominee Patricia Arquette is wondering whether Ricky Gervais has apologized yet for some of his recent tweets that have been deemed transphobic.

“I think it’s a really important conversation for everybody to have. Obviously, I have very strong feelings about protecting the trans community,” Arquette told Variety‘s Marc Malkin on the red carpet of BAFTA’s annual tea party in Los Angeles, Calif. on Saturday. “I just don’t think anything’s funny about making fun of the trans community. They’re really persecuted, so I don’t think it’s funny.”

This is far from the first time Arquette has spoken out for transgender rights. When she won the limited series/TV movie supporting actress Emmy in September 2019, Arquette used her time on stage during her acceptance speech to remember her sister, actor and transgender rights activist Alexis Arquette, who passed away three years prior.

After noting that she was so grateful to still be getting amazing acting roles at age 50, she then noted the same could not be said for everyone. “Trans people are still being persecuted,” she explained. “I’m in mourning every day of my life, Alexis, and I will be for the rest of my life for you, until we change the world so trans people are not persecuted — and give them jobs. They’re human beings, let’s get rid of this bias we have everywhere.”

Gervais came under fire in December for a series of tweets he claimed were jokes that followed J.K. Rowling’s support of Maya Forstater, a researcher who was fired for tweeting that a person cannot change their biological sex. The first tweet responded to an article in Spectator USA that was mockingly written as though from the perspective of a trans woman angry over Rowling’s comments.

“Those awful biological women can never understand what it must be like for you becoming a lovely lady so late in life,” Gervais wrote. “They take their girly privileges for granted. Winning at female sports and having their own toilets. Well, enough is enough.”

From there he engaged with some users who were upset over his tweets, including to note that he doesn’t seem to think anything is off-limits in a joke: “I do. I also make jokes about AIDS, Cancer, Famine, and The Holocaust. Those things do a bit of harm too. But jokes don’t. Have a nice day,” he wrote.

Ahead of the 77th Annual Golden Globe ceremony, telecast executive producer Barry Adelman, who is also executive vice president of television at Dick Clark Prods, told Variety he was not worried about Gervais making similar jokes on stage to what he tweets.

“You don’t know where he’s going to go, but I think he can read the room. I think he knows what’s going on in society. And he’s a professional,” he said.

Arquette is nominated in the supporting TV actress category at the Globes this year for her portrayal of Dee Dee Blanchard in Hulu’s limited series “The Act.” This was the role for which she won the Emmy in September.