Watch ‘Parks and Recreation’ Cast Reunite to Perform ‘5,000 Candles in the Wind’ 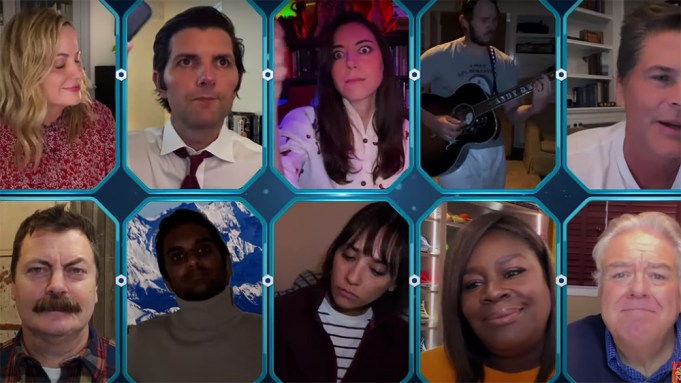 What’s 5,000 times better than “5,000 Candles in the Wind”? The “Parks and Recreation” cast reuniting to perform the show’s legendary tribute song.

The 30-minute episode featured plenty of callbacks and running jokes from the NBC sitcom, which ended in 2015, but no Pawnee get-together would be complete without a performance of “5,000 Candles in the Wind,” the anthem Andy wrote in honor of Li’l Sebastian, the town’s beloved miniature horse who died in Season 3.

The special — set up as a series of Gryzzl calls (Pawnee’s equivalent of Zoom) — sees Leslie in peak problem-solving mode. She’s hard at work in the Department of the Interior, but she’s feeling especially down about being socially isolated from those she cares about most.

“Leslie, you said you needed something to lift your spirits,” Offerman’s Ron Swanson said. “So Andrew, take it away…”

“This is a long song,” Adam Scott’s character (and Leslie’s husband) Ben Wyatt, laments — to which Rashida Jones as Ann Perkins replies,” Shut up, Ben!”