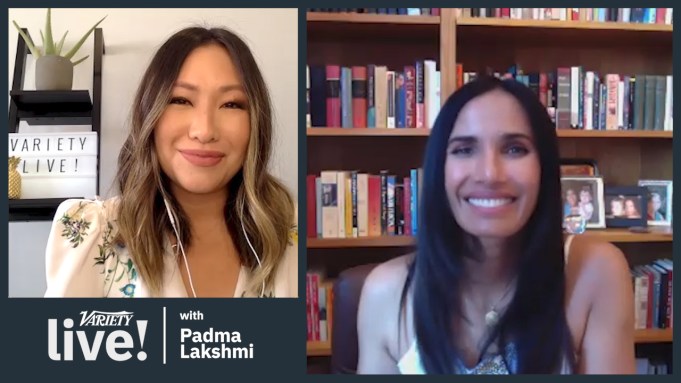 Padma Lakshmi has played host to more than a few good meals as she fronts Bravo’s “Top Chef,” and executive produces and hosts Hulu’s “Taste the Nation.” But right now, she is mourning the loss of director Joel Schumacher. The prolific filmmaker passed away on Monday, and Lakshmi says she’ll remember him for his sense of style and wit — and being her favorite dinner guest.

“I used to say, ‘You know, if you weren’t gay, we’d be married.’ He’d be like, ‘Oh, please, I’m too young for you,’” she recalls on “Variety Live!” “He was my favorite dinner guest. I’d had him over [at] my house for dinner all the time because he’s such a good raconteur.”

Back in February before quarantining, Lakshmi had the chance to show him rough cuts of “Taste the Nation.”

The docuseries highlights the histories of various immigrant communities in the U.S. and how their cuisines have shaped what is considered “American food,” a topic Lakshmi says feels particularly relevant now as immigration and appropriation in the culinary world have come to the forefront.

“It is a reaction to all of that. It is the anecdote to it saying, ‘These foods come from these people, and we’re going to talk to the people that originated this cuisine.’ We’re going to find out not only what this food is like, but how life is like for them,” she says. “We need to understand that we’re all Americans. We all have something to contribute and being American or a ‘real American,’ whatever the hell that means, does not mean that you can only be Caucasian.”

It’s a theme that resonated with “Top Chef” season 17 winner Melissa King, who infused aspects of her Chinese American upbringing into her dishes, most notably on the show’s finale episode, filmed in Italy. Given the jet-setting nature and close quarters with which contestants and judges interact on the show, Lakshmi says she’s uncertain of what a post-pandemic “Top Chef” would look like.

“We are in talks about that. We need to put in very serious protocols that industry-wide will have to be in effect. It’s also like, how do you get guest judges to get on a plane and come to be a guest on our show for an episode? How do you film in restaurants that are not really up and running?” she says. “I doubt you’ll see Tom [Colicchio] and I sharing a plate of food again. We usually will eat off each other’s plates. But it’s tough. I wish I had more answers; it’s devastating.”

Watch the full interview with Padma Lakshmi on “Variety Live!” above.