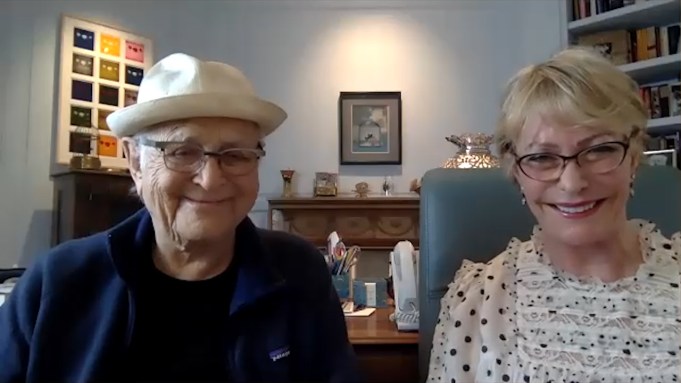 At the spry age of 98, Norman Lear just made Emmy history, breaking his own record as the award’s oldest winner ever.

And when he’s not working on projects such as “Live in Front of a Studio Audience” on ABC, or a new animated version of “Good Times” for Netflix (which Variety exclusively reported earlier this week), Lear has been a longtime advocate for sustainability in Hollywood. During the second episode of Variety‘s Sustainability in Hollywood event presented by Toyota Mirai, the legend spoke with senior TV editor Michael Schneider with his wife, Lyn Lear, about how they got first got involved in the environmental movement, their involvement in politics and why climate change shouldn’t be politicized.

Lyn shared that women were at the forefront of starting the conversation on sustainability across the industry. The producer of 2014’s UN Climate Summit documentary, “What’s Possible,” Lyn brainstormed ideas with Alan Horn’s wife Cindy Horn on how they can make a difference for their children.

“We were having lunch and thinking about what the world is going to be like in 30 years when our kids were grown and this was around 1987, 1988, and we started investigating, as pregnant moms how we can be really involved in pregnancy and what you’re eating and all of that,” she said.

From their conversation, Norman suggested the idea of an awards show to educate writers, producers and directors on today’s environmental issues. This community luncheon quickly grew as an event, awarding the best film, documentary and television show.

Before the age of the internet, Lyn added that it was difficult for writers to do research on environmental issues. “We had the resources of the Sierra Club and Conservation International and these other organizations, so the writers would come to us and we would hook them up with the right people to learn about these issues,” she said. “But everybody was interested. Everybody started to see that these were important issues and the timing was really right.”

In 2000, the couple also toured around all 50 states with a copy of the Declaration of Independence. This experience, Norman added, inspired him to further advocate for democracy and continue creating stories that spotlight different social issues.

“The most amazing thing was to be in some small town in their city hall or wherever, the library, wherever the document was positioned, and there would be a line around the block,” he said. “Largely parents with their children, just to spend 10, 12, 14 seconds in looking at the document before they had to move off to let the guy behind them. But it was so lovely and solemn and it’s such a great family occasion.”

And the duo continues their contribution by producing films displaying the impact of climate change. Lyn, for instance, is collaborating with director Lucy Walker on a film titled “Bring Your Own Brigade,” on the aftermath of wildfires in California, Brazil and Australia.

“Now look where we are. When you walk outside, it was like a heat wave, like an oven hitting you in the face with 110 degree weather,” said Lyn on how climate change has become a pressing issue. “So it’s going to force us. I mean, we can’t make it political or keep it political for too much longer.”

The conversation with the Lears was followed by a sustainability in storytelling panel featuring Fisher Stevens, director of “Before the Flood;” Louie Louie Psihoyos, director-producer of “The Gamechangers” and “The Cove;” Carolyn Bernstein, executive vice president of global scripted content and documentary films at National Geographic; Bruce Miller, executive producer of “The Handmaid’s Tale”; and director-producer Alethea Arnaquq-Baril.

Arnaquq-Baril addressed the structural problems within sustainability movements, and their failure to address the values of indigenous communities. While highlighting environmental issues is important for filmmakers, she said it is crucial to include the voices of those who are directly impacted by climate change.

“A lot of actions — people when they do have their minds changed and want to take action, often end up taking the wrong actions that are really harmful to the people that are most affected,” she said. “So it’s important not only are we finding ways to get people’s attention, hold it, get the message across and get them to act. But the actions that they take have to be considered and, and perspectives from people that are actually affected are taken into account.”

Psihoyos echoed the significance of creating content that will lead to immediate, meaningful action. While filmmakers do not have control over the audience’s reaction, he is hopeful that today’s politically active youths will create change over time.

“I’ve seen this happen, but it takes about 10 years. These big environmental changes, scientific changes, and I’ll put plant based diet into, they take about 10 years to get hold of it,” he said. “And I think you’re going to see a huge shift because of the documentaries, because of the narrative films that are being done because of the people, the activist, the 10% pushing the masses towards that — that utopia that we want be and where the world’s just a slightly better place than we left it.”