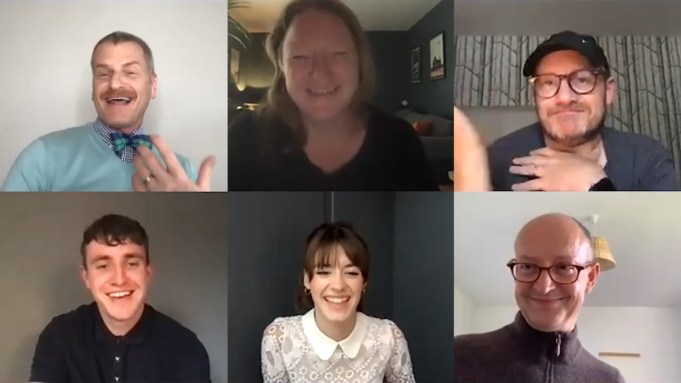 Paul Mescal remembers exactly where he was and what he was doing when he found out he secured the lead role of Connell in Hulu’s “Normal People.”

He was participating in a play workshop in London when he missed a call from his agent. “I was like, ‘Oh God, Christ Almighty,’ he recalled during the Variety Virtual TV Fest. “I ran outside onto the street. I had about five minutes, took the call, started screaming, rang my parents started screaming, went back into a room with the actors that I were working with. It was like a week long workshop so they were like relative strangers — and I was like shaking. They were like, ‘What just happened?’ And I was like, ‘This big part!'”

His co-star Daisy Edgar-Jones also remembered the moment she learned she’d be playing Marianne in the series, adapted from Sally Rooney’s best-selling novel.

“I was on my own in my bedroom and I was messaging and my friend, who’s an actress who helped me rehearse my lines, was like, ‘Have you heard anything?’ and I was like, ‘No, I don’t think I’m going to get it,'” she said. “And then I literally got a call from my agent and I just sort of sat in stunned silence. No one was in the house, so I rang my mum and dad. We didn’t say words. And then my flatmate came home who worked at Waterstone’s, the bookstore, at the time. He couldn’t believe it because he’d been selling that book. It was the book of the year!”

It wouldn’t be long before the two would be on set filming, a shoot that required multiple nude sex scenes. An intimacy coordinator was on hand for the entire shoot. “I felt those scenes, in my head, we’re going to be the most difficult in terms of process, but actually they were the easiest because it was so clear what was required,” Mescal said. “There was a clear process in place that made me and Daisy feel empowered.”

Before the audition, Edgar-Jones called her mom to get her thoughts on how much nudity would be required if she got the part. Her mother gave her the go-ahead when Edgar-Jones told her that Oscar-winning director Lenny Abrahamson (“Room”) was spearheading the project.

“She was like, ‘It’s grand.’ I knew I had my mom’s approval, which is always like the main thing,” Edgar-Jones said.

While a second season hasn’t been announced (and may not even be in the works), Abrahamson joked that it would probably happen years down the line after Mescal and Edgar-Jones won some Oscars.

He added that Mescal would probably be playing James Bond by then. But is 007 even on his wish list?

“I don’t even know what the correct answer to that is,” Mescal said. “It’s something that it doesn’t seem like a real thing.”

Mescal cracked, “Yes. The answer is yes, I would like to be that person.”