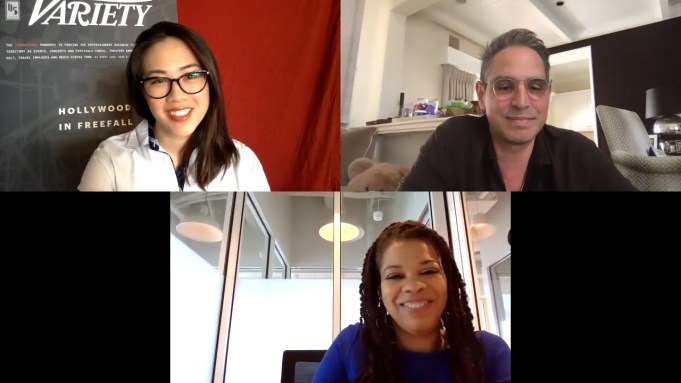 Speaking with moderator Elaine Lowe, Carroll addressed the current climate in the U.S. following the death of George Floyd at the hands of Minneapolis police officers and how that, combined with the pandemic, sparked a national movement.

“That unfortunate perfect storm created a moment where people couldn’t deny what was happening in this country anymore,” she said. “Because of that and because of the magnitude of the response we’ve seen, it does feel different. … The speed with which so many companies, networks, studios, other entertainment entities put out statements in support of Black Lives Matter is not something we saw before.”

But Carroll went on to say that while these types of statements of support are welcome, “That’s also not enough.”

“The days of me using my nice words are done because we’re at a crisis point,” she said. Carroll went on to speak about how Black TV writers are often made to continue on as staff writers while white peers move up the ladder, becoming producers and showrunners. She also said the industry needs more people of color at top levels.

“There aren’t enough Black executives in positions of power in this industry,” she said. “There just aren’t. I can’t tell you how many networks and studios I’ve walked into and the development team does not include a Black person. So you can imagine going in and trying to pitch a story with nuanced things in there that just completely go over their heads because it is not their experience.”

Berlanti echoed those sentiments, while also saying that it is important for the shows that are being made today to reflect the current times.

“In the DC Universe especially, there’s been a focus on us recognizing that we want to create heroes that look and felt like today, not the 1940s or 1950s,” he said. “They were all very well intentioned when they created those back then, but there’s a certain responsibility that you have if you’re going to escort these iconic characters into this generation to make sure they have the heart of that character, but they don’t have to have the gender or the color of that character or the sexuality.”

The pair also addressed ongoing concerns around restarting TV production amid the ongoing pandemic. Many of the shows Berlanti produces shoot in Canada, with international travel adding an extra layer of complexity to the problem.

“The biggest one is travel in and out,” he said. “How are we getting cast up there? Are we getting directors up there? Those are the biggest considerations, I think will initially be around travel. The shared considerations we have on all the shows, wherever you are, is how available is testing and I’m still waiting for something very clear from the guilds and unions saying, ‘This is what we deem safe.'”