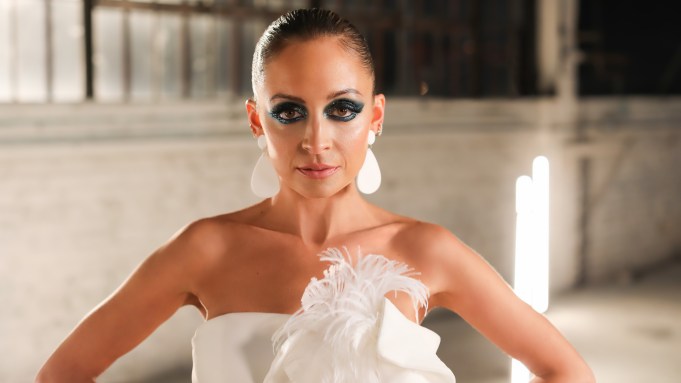 In the first scene of the first episode of “Nikki Fre$h,” Nicole Richie — clad in a floor-length gown and bejeweled headband, with her assistant Jared in tow — saunters into her husband Joel and brother-in-law Benji Madden’s office for a meeting where she pitches the Good Charlotte members on her next big idea: making trap music for her plants. Or, more specifically, a new sub-genre she dubs “parent trap.”

The inspiration for the scene came from an actual pitch meeting Richie had with the Madden brothers. Her trap alter-ego — and the one taking center stage on the short-form series streaming on Quibi — Nikki Fre$h is rooted in a hashtag Richie started using to accompany posts about her edible garden.

“I fell in love with it, and started hashtagging all my harvests because that’s what Oprah does so I was like, I have to also,” Richie told Variety on the “Variety After-Show.”

The show itself is in part a send-up of wellness culture (she and her assistant try to sell “crystal granola” at a grocery store) and environmental awareness.

Each episode concludes with a music video for a song that Richie helped write (with singer Sarah Hudson and producer Andrew Goldstein) and rap. The songs are also available on Apple iTunes and Spotify following each episode, and will culminate in a to-be-released comedy album.

“Nikki Fre$h” is the first time she and husband Joel Madden have collaborated professionally, with Madden accompanying her in the studio whenever she had to record.

“My first time ever in the studio, he just plopped right down really casual, looked at me and was like, ‘Go,’” she recalled. “I was like, um, I’m going to need some vocal warm-ups, need you to not look at me.”

Richie also recruited Bill Nye for one episode that addresses bee colony collapse disorder, a topic both she and Nye are passionate about.

“I want him to be on the show permanently. He’s so smart and sweet and good-looking. He’s got hot science energy. Big science energy,” said Richie, who has her own beehives and shares their honey with friends. The episode concludes with the song “Bee’s Tea.”

Richie’s passion for gardening is something she is leaning into more during the coronavirus pandemic, as she avoids grocery stores. She is unsure of when she will return to her gig as a judge on Amazon Prime Video’s fashion competition series “Making the Cut,” and her own apparel and accessories line, House of Harlow 1960, is currently on hold.

“I work in entertainment, and I work in fashion and those things have come to a halt. It’s scary at times,” she said. “These are conversations my husband and I have to sit down every day and talk about possibilities of ways to figure out our lives. It’s a first for all of us, really.”

Right now — and contrary to the over-the-top Nikki Fre$h — Richie said she’s focused on keeping her family on a schedule and gathering a spring harvest from her garden (fava beans, eggplant and garlic are coming in).

When asked who her go-to trap artist is, Richie said her “go-to everything” is Big Freedia, with whom she hopes to collaborate one day. In the meantime, she’s hoping Nikki Fre$h’s songs will one day turn into club bangers, similar to the ones she used to hear in her club-frequenting days.

“I’m hoping that DJs all around the world will start playing ‘Bee’s Tea’ and people will be swaying and chanting,” she said. “So they’ll leave dehydrated. Also, a little educated.”

Watch the full interview with Nicole Richie on the “Variety After-Show” above.