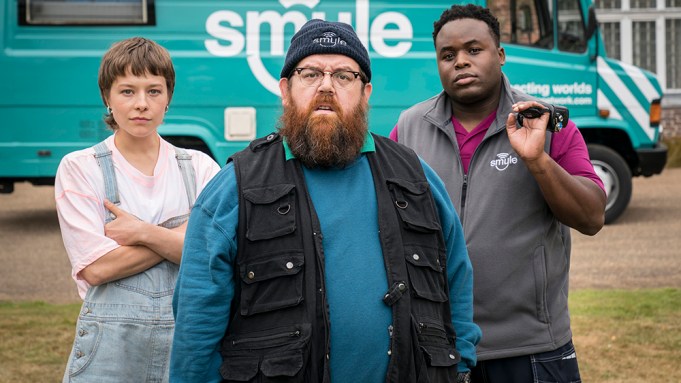 Nick Frost and Simon Pegg have been messing around with the occult ever since they first became friends.

In fact, the two used to drive around in Pegg’s square-shaped Renault 5, looking for spooky spots to stop, “smoke bongs and scare ourselves,” according to Frost.

It’s perhaps appropriate, then, that in the pair’s latest series, Amazon’s “Truth Seekers,” Frost plays a broadband installer who fancies himself as an expert in all things supernatural. However, rather than team up with Pegg like old times, on this occasion Frost jokingly told Variety that his comrade has been “banished to number 10 on the call sheet,” and replaced with rising British star Samson Kayo.

The change gives “Truth Seekers” a different dynamic to the spooky Frost and Pegg fare we all know and love, Frost said.

“I’ve used Simon as much as I can, and now…I’ve upgraded to Samson Kayo,” said Frost. “I didn’t want this to be a Simon Pegg and a Nick Frost thing. Simon helped create it and write and he plays Dave (Gus’ shady boss), so there’s lots there for Simon Pegg fans. But I wanted it to be a different groovy gang.”

Frost and Pegg’s inspiration for “Truth Seekers” was drawn both from the work of John Carpenter, and iconic sci-fi series “The X-Files,” with Frost calling it “a love letter” to Mulder and Scully’s antics. The similarity between “Truth Seekers” and “X-Files” is their “monster of the week” format, as Frost put it.

Gus and Elton (Kayo) drive around in their broadband van, solving mysteries everywhere they go, which is certainly reminiscent of a certain dog and his five meddling friends.

“We wanted something which wasn’t necessarily British in feel,” he says. “We wanted it to be a bit Scooby gang-ish, but also with a story that’s getting bigger and bigger as the world opens up to them.”

In terms of how they achieve their signature blend of horror and comedy, Frost said he sees them as “two sides of the same coin,” adding that he can’t see himself and Pegg making a horror project without taking a massive syringe of humor to it.

“You don’t write a comedy script and add jumps, or write something horrific and add jokes. It’s just a very natural way to write. You’re writing a mystery with characters who are funny because humans are funny and weird and flawed and broken, so all your characters can be all those things,” Frost said. “You can have a creeping sense of foreboding and it also  the same time it also being funny without having to undercut any of the jokes or the jumps.”