‘Never Have I Ever’ Star Maitreyi Ramakrishnan on Her Newfound Fame, Season 2 Dreams for Devi 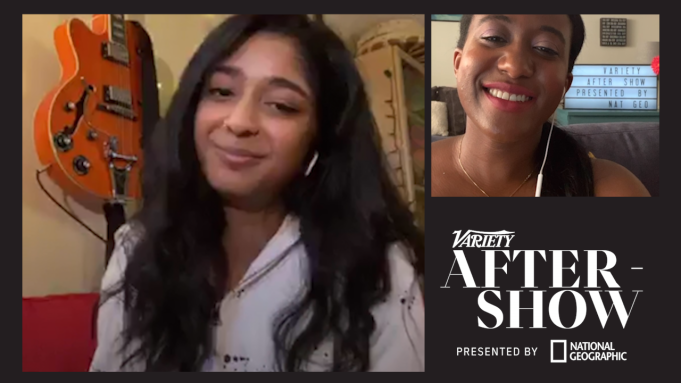 At only 18 years old, “Never Have I Ever” star Maitreyi Ramakrishnan is soon to become a household name, but the Canadian teen isn’t letting any of the early success of the show go to her head.

“I think I’ll always just be a girl from Mississauga,” Ramakrishnan said on the Variety After Show, presented by National Geographic, when asked if she feels like a ‘superstar’ after the show shot to No. 1 on Netflix. “No matter what, I think that’ll always be my roots.”

Ramakrishnan is currently quarantining at home with her family in Canada instead of walking the red carpet in New York or Los Angeles to celebrate the coming-of-age comedy from co-creators Mindy Kaling and Lang Fisher. But the young star is still relishing in the excitement around the new show, which centers around Ramakrishnan’s character Devi Vishwakumar, an Indian American teen growing up in Southern California. Devi is a nerdy, hot-headed overachiever who desperately wants to be cool. And in addition to the ultra-relatable high school drama about fitting in, searching for love and trying to figure out who you are, Devi is also dealing with the sudden death of her father.

“It’s awesome because I’m seeing so many people saying, ‘Oh my God, I can relate to this so much.’ Whether it’s something as simple as one of the arm hair jokes — because let’s be real, even though I’m 100% confident with my arm hair, there are days where I go up to my father and I say, ‘Why did you do this to me? Why can’t you give me anything else?’” Ramakrishnan says. “Or somebody saying, ‘Thank you, this made me really realize I have some unpacking to do with the loss of a family member’…That’s all I wanted from this show. Emmys for the cast, Emmys for the direction, a Nobel Peace Prize — I’m not opposed — but, in all seriousness, this is all I wanted from the show.”

It’s been a whirlwind since Ramakrishnan’s first audition (recorded with her best friend at her local community center) and beating out 15,000 other actors on her way to becoming the breakout star in Kaling and Fisher’s show: “This is my first job ever. I never had a job before this. Mindy is my first boss.”

“Honestly, I don’t think on set I ever felt like the star because my drama teacher always taught me if you’re a star [or] if you’re the lead of the show, that means s—. You do not matter that much. You are just the same as everyone else,” she recalls. “That was my mindset coming to set, I didn’t think I was anything crazy special. One thing I won’t forget is just having everybody be so kind to teach me everything that I asked. I asked so many questions. I wanted to learn everything — between hair and makeup to lighting and sound. My fellow actors, I love them so much because they’re the ones that gave me the confidence to do the performance I did. I couldn’t have done that just purely out of high school. A part of that process was my cast members being such great homies to me and supporting me.”

Since “Never Have I Ever” debuted on April 27, Ramakrishnan has been inundated with messages from fans who have fallen in love with the series and its diverse representation, especially given the fact that her character leads the series as a South Asian young woman.

“For a lot of people of color and the South Asian community — I can speak for myself here when I say that we’re so used to being sidekicks, we’re so used to being comedic relief,” she explains. “And sure, there’s nothing wrong with being a sidekick or being funny or the comedic relief … but it isn’t okay when it’s offensive and when that’s all you get. Suddenly, all you’re doing is you’re seeing yourself as a sidekick, as not as important. And when you do relate to a character, they’re usually Caucasian and then you realize you’re living your life in the shadows as a person of color and you’re only able to see yourself through white characters, which is not totally okay either.”

The show also promotes cultural sensitivity, which is especially important to the young Tamil Canadian actor. “That active effort for Devi’s name ‘Vishwakumar,’ to get that right, it’s important because that’s her name. You deserve to be called the way you want to be called, no matter what.”

“Obviously Tamil names are super long. My entire full name — Maitreyi Ramakrishnan — I have 20 letters, but I do have my friends at school that just call me Ramakrishnan and they pronounce it correctly. I think names are so important,” she explains. “I think one of the greatest disrespects you can do to a person is not put the effort into somebody’s name. Personally for me, I used to anglicize my name … in high school. And then when I landed in L.A., they were like, ‘How do you say your name? Sorry, I don’t want to mix it up.’ And I’m like, ‘Oh my God, this is my chance to reclaim my name’ because I love my name. Why would I change it?”

As for the status of a second season of the breakout hit, Ramakrishnan says she doesn’t know anything just yet, but she has dreams for Devi’s future.

“Then also the idea of approaching that grief — confronting it, having that battle, even though it’s something uncomfortable to think about, [but] actually just running toward it and facing it, dealing with it head on,” she continues. “And then number three, of course, embracing her culture because that is so important in a world where identity is everything. It’s how you portray yourself. It’s how you show yourself to the world and how everybody will view you, but also how you accept yourself. And I think if Devi does those magic three, she might be a little bit more at peace with herself.”

“Never Have I Ever” is streaming on Netflix.