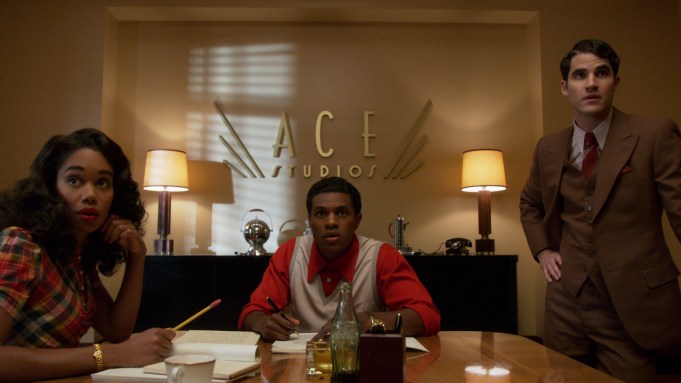 “This town is all about dreams,” Dylan McDermott says at the start of the official “Hollywood” trailer Netflix debuted Monday.

In the upcoming streaming limited series from Ryan Murphy and Ian Brennan, McDermott’s character, Ernie, is a man who owns a gas station that runs a secret call boy operation on the side but who had dreams of becoming a movie star. Veteran Jack (David Corenswet) has similar dreams, but ends up working at Ernie’s operation. But “Hollywood” is not just a tale about hustling to make money while trying to keep aspirations alive; it focuses on a group of up-and-coming creative types who pursue those goals whole-heartedly in post-World War II Tinseltown.

The series is one that “rewrites the Hollywood ending,” Brennan previously told Variety. Calling it a “delightful fantasy to write,” Brennan notes that in the limited series, “The characters who had been, and in the real world would continue to be, beaten down have great moments of victory and of aspiration.”

For example, a young screenwriter named Archie (Jeremy Pope) is met with surprise when Ellen Kincaid (Holland Taylor) first meets him and realizes he is a black man, but she immediately embraces him — literally — with an “I love it” and a kiss on the mouth.

“If we change the way that movies are made, I think we can change the world,” says aspiring director Raymond, played by Darren Criss, in the trailer.

In “Hollywood,” each character is written to offer a glimpse behind the gilded curtain of that time period, shining a light on unfair systems and biases across race, gender and sexuality. The show endeavors to examine decades-old power dynamics and consider what the entertainment landscape might look like if they had been dismantled.

The almost three-minute-long trailer also provides glimpses at Jake Picking as Rock Hudson, Queen Latifah as Hattie McDaniel, and the show’s take on the 1948 Oscars.

All seven episodes of “Hollywood” will stream May 1 on Netflix.