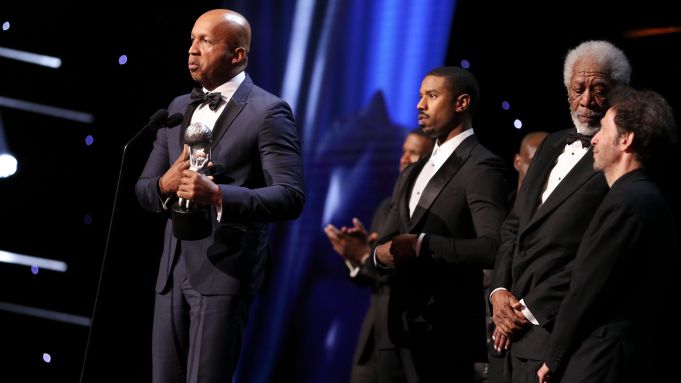 It was quite a night for “Just Mercy.”

The film picked up the win for best motion picture at the 51st NAACP Image Awards, capping a two-night event that included outstanding actor and supporting actor prizes for its stars Michael B. Jordan and Jamie Foxx, respectively, as well as a win in the outstanding ensemble cast in a motion picture category.

Bryan Stevenson, the real-life attorney and social justice activist played by Jordan in the film, accepted the award for best picture by emphasizing the inequities in the criminal justice system.

“We live in a nation with the highest rate of incarceration in the world,” said Stevenson. “The Bureau of Justice has projected that one in three black male babies born in this country is expected to go to jail or prison. We have a system of criminal justice that treats you better if you’re rich and guilty than if you are poor and innocent and we cannot stay silent about this reality. So this platform that we took and the platform is a many of you have is incredibly important. We’ve got to have truth and justice in this country. We cannot allow these problems to persist. There is a presumption of dangerousness and guilt that gets assigned to black and brown people and you could be a screenwriter and a director or a music star or celebrity but you still have to navigate these presumptions of dangerousness and guilt. And I can tell you, as I get older it’s exhausting, so we’ve got to have truth and justice. We’ve got to fight for the things that are important.”

The night was filled with similar statements urging for advocacy. Rihanna, in accepting the President’s Award, told the crowd that “we can only fix this world together. We can’t do it divided… We can’t let the de-sensitivity seep in.”

She then put out a call for allyship.

“How many of us in this room have colleagues and partners and friends from other races, religions, sexes — show of hands?” she said. “Well then you know, they want to break bread with you, right? They like you? Well then, this is their problem too. So when we are marching and protesting and posting about the Michael Brown Jrs. and the Atatiana Jeffersons of the world, tell your friends to pull up.”

In accepting the award for outstanding actress in a comedy series, Tracee Ellis Ross advocated for the amplification of black women’s voices, citing writer Audre Lorde’s message that “we too often have been expected to be all things to all people and to speak everyone else’s position but our very own.“

“Our experiences and stories are way too often told through interpreters, and history, system and laws have told us we need a man’s voice or power to name our existence and validate our experiences, that we need a son to carry on a legacy to etch our impact in time,” said Ross on stage. “But we get to define ourselves, not through how others imagine us but through how we see ourselves… I love being a part of this ever-growing chorus of black women owning our own legacies.”

Host Anthony Anderson kicked off the awards show with a monologue that took a moment to poke fun at the lack of representation in the remaining slate of major Democratic presidential candidates.

“Right now, it looks like Bernie Sanders versus Mayor Pete versus Mike Bloomberg versus Elizabeth Warren versus Amy Klobuchar versus Joe Biden,” he said. “Now how’s that for diversity? Representing all shades of white.”

Anderson also pointed out the continued inequalities in the system, contrasting the Academy Award bestowed on animated short film “Hair Love” with the discrimination that African Americans face when “society still disciplines black folks for our hair.”

“‘Hair Love’ won an Oscar for its great, positive story about an African-American father and his daughter,” said Anderson. “But while that movie was winning awards, our society still disciplines black folks for our hair. Thanks in part to the NAACP, passage of the Crown Act made California the first state to ban discrimination against black students and employees over their natural hairstyles. On one hand, that’s progress. On the other, why in God’s name did we need that law in the first place? But that is why we are here, to show our solidarity and to celebrate those whose standards of excellence inspire us all.”

Representative John Lewis, who represents Georgia’s Fifth Congressional District, was honored with the Chairman’s Award. He recalled his youth in 1940s and 1950s Alabama and the segregation and discrimination that he faced. The NAACP, he said, “inspired me to get in good trouble, necessary trouble, to try to change America.”

“The NAACP has been like a bridge over troubled waters; we are going to have some more troubled waters,” said Lewis, alluding to the current political climate. “We need the NAACP now more than ever before.”