‘Mythic Quest’ Team on Making ‘Quarantine’ Special, Teaching F. Murray Abraham How to Use a Smart Phone in the Variety Streaming Room 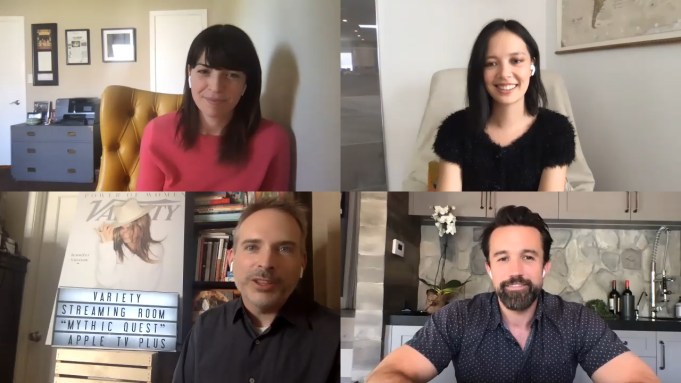 The team behind Apple TV Plus’s original series “Mythic Quest: Raven’s Banquet” has been working on the outline for the second season since the show premiered on the streamer back in February. In the midst of charting the next episodes of the sitcom, social distancing regulations took hold to combat the coronavirus pandemic, drastically changing the lifestyles of both the stars and producers behind the show and the video game developers that the cast plays.

That inspired the creation of “Mythic Quest: Quarantine,” a special episode depicting how the characters were weathering the pandemic. “Quarantine” premiered on Apple TV Plus on May 22 to rave reviews. Series star, co-creator and executive producer Rob McElhenney was joined by co-creator Megan Ganz and star Charlotte Nicdao (“Poppy”) to participate in a conversation in the Variety Streaming Room presented by Apple TV Plus. Moderated by Variety senior editor Michael Schneider, the group discussed the production process behind “Quarantine” and upcoming plans for Season 2.

“[We were] just looking to get the crew paid and back to work,” McElhenny said. “Meg and I and [series star/executive producer] David Hornsby were spending a lot of time on this exact interface, Zoom, taking about the second season… We finished the scripts and, subsequently, we’re going to have to go back and rewrite those as well, because the entire world is completely different. But at that point we realized we didn’t have much to do. So we thought, let’s figure out a way in which we can get up and running. The only way we could do that is to shoot an episode on quarantine.”

Ganz went on to discuss how the writers used their relationship with game developer Ubisoft to understand how employees in the video game industry were working under quarantine, drawing from their reality to write the special.

“Ubisoft was telling us that all the video game studios were working remotely,” Ganz said. “Obviously, video games are doing pretty well during the quarantine, as far as having lots of people want to play them. So, they have to make sure their servers are up and running. They have to stay very active during this time… We just thought, since we have a workplace comedy, it was within our wheelhouse to talk about these issues that people are going through in a relatable way, and also the emotions that people are having.”

Ganz also emphasized the urgency with which “Quarantine” was made, saying a special with this subject matter would only be appropriate and be able to resonate with audiences for a finite period of time.

“We knew we had to get it out as soon as possible so that it would come out while [we] are still in quarantine,” Ganz said. “I imagine, potentially at the end of this, people won’t necessarily want to be thinking about it all the time or revisiting it. But right now, having their experience reflected back to them, might’ve provided them some comfort.”

Nicdao also confirmed the special’s fast turnaround and how the new project came as a bit of surprise to her.

“Rob gave me a call on a Saturday morning and was like, ‘Hey, we were thinking of making another episode, but from our homes and we want to shoot some test stuff today,’” Nicdao said. “It was actually a really fun day. It was a few of the cast [and] a bunch of the crew. We all signed on to a Zoom call. And I think that the call lasted like eight hours as we just troubleshooted how to make this thing. We figured a lot at that day, and then like a week or two later we were shooting the episode.”

One of the more difficult bouts of troubleshooting involved getting cast member F. Murray Abraham, a newcomer to smart phone technology, to join the Zoom call.

“We [sent] him an iPhone, which he hadn’t really engaged with necessarily,” Ganz said. “Yesterday, we all signed into a Zoom together and I signed in and the first thing I saw was that there were two F. Murray Abraham boxes on the screen. He had somehow signed in twice and they were trying to figure out how that even happened… But he was great. And our post department really exercised just a ton of patience, walking him through how to put all these apps on his phone and all the settings. It was really technically complicated, what they were asking him to do. And it did result in like him accidentally calling the emergency number twice while they were setting it up.”

The Variety Streaming Room is dedicated to presenting virtual conversations that span private screenings of upcoming projects in film and TV, exclusive Q&As with creators and talent and relevant B2B discussions with industry thought leaders.