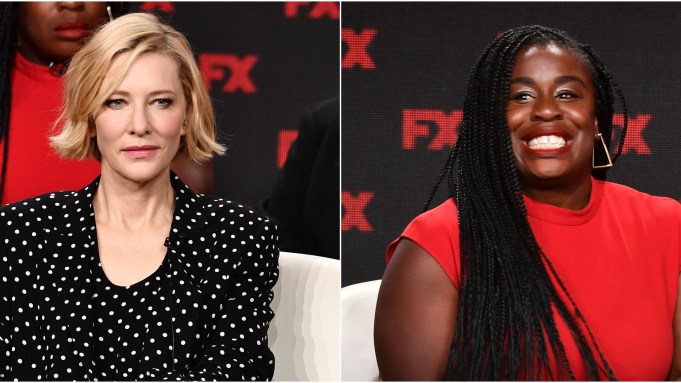 The third episode of FX’s nine-part limited series “Mrs. America” is entitled “Shirley” for Shirley Chisholm, the first black woman elected to Congress who represented New York’s 12th congressional district for seven terms between the 1960s and 1980s. Having her voice in the story, portrayer Uzo Aduba said during the cabler’s Television Critcs Assn. press tour panel for the show on Thursday will “right a cultural wrong.”

“Her very effective role and presence in that period was incredibly powerful for all women — especially for women of color — and important now,” she explained. But, she added that she thinks including her now also “reflects how over the years of this history having passed, we’ve glossed over some of those intersectional figures and their importance and their relevance in the story.”

“Shirley” will be a particularly important episode to the series as a whole, creator Dahvi Waller said, because it introduces the birth of intersectional feminism, which she notes was “a messy time period.

“What really struck me about all the women from this period was how messy they were: They’re complex, they quarrel, there’s love, there’s hate,” she continued.

“Mrs. America” explores the movemnt to ratify the Equal Rights Amendment (ERA) through the points of view of some pivotal women who became important political figures. It starts with Phyllis Schlafly (played by actor and executive producer Cate Blanchett), for whom the premiere episode is entitled, and continues into “Gloria” aka Gloria Steinheim (Rose Byrne), while also including Bella Abzug (Margo Martindale), Betty Friedan (Tracey Ullman) and more, including a composite character loosely based on the real Schlafly’s neighbor (played by Sarah Paulson).

“She is very different from myself: sort of innocent and open-hearted and dedicated Catholic and homemaker,” Paulson said of her Alice Macray. “I thought it was interesting to put my toe in that water and be a person for whom their entire life was that family life [and to] feel the sense that she somehow didn’t matter because her desire was to be in her home and support her husband.”

In the series it is the character of Alice who turns Phyllis her onto what she thought were “the dangers of the ERA: that women could be drafted,” Blanchett said. “She thought it would delude the military of its strength, and then she started to forge a link in her mind between the ERA and communism. The impact on the military is why she got involved.”

Although she had good intentions, “how polarizing she became is the very thing that kept her from getting a spot in [President Ronald] Reagan’s cabinet,” Blanchett added, noting that they spent time as a production to balance the portrayal of Phyllis.

“I call her the original disruptor,” Waller said of how the real-life Schlafly was able to organize women through the network of supporters from her 1960s newsletter.

Blanchett was later asked whether or she “liked” Phyllis or not, and responded firmly.

“Whether I like or dislike a character, whether it’s Phyllis or Elisabeth I is utterly irrelevant, it’s not my place,” she said.
My place is to present a character warts and all.”

Poetically, as the panel was going on, the Equal Rights Amendment was going to a floor vote in Virginia, the 38th state needed to finally ratify the amendment.

“It was like ‘Groundhog Day,'” Blanchett said about the conversations they saw coming up in the media through the years. These included everything from same-sex bathrooms to women being drafted, which is in the news again right now because of the situation in Iran.

“I’m a passionate lover of history. I don’t think you can in any way understand the present unless you look into the past,” Blanchett said. During the process of developing “Mrs. America,” they looked at historical moments such as “Roe V. Wade” to consider how much was relevant to the story they were telling and what needed full episodes devoted to them.

The series, Blanchett said, is designed to ask a myriad of questions for viewers regarding how they feel about certain public figures and policies and movements. “How do you feel? It’s all about conversation…not just for women but for men,” she said. “The Equal Rights Amendment, it really is about justice, so I think it’s a very interesting thing to ask: What was so terrifying about the notion of equality, and how do we view the Constitution?”

While Waller prefers to allow her audience to decide what they take away from the show for themselves rather than tell them what to think, she said she does hope the show will “shine a light on today through the reflection of history” because she believes it will help the audience “draw al ine to how we became such a divided nation” and realize how many changes still are yet to come.

In the 1970s while these women’s movements were unfolding, Blanchett noted there was a “strong cultural of robust public debate,” which she feels is something that has gotten lost, especially in recent years — “not just in America,” she said. “We’ve got haranguing matches and shouting, but we haven’t got robut public discourse. These women actually talked and debated these things through. They didn’t always agree with one another, but they discussed.”

“Mrs. America” will launch with the first three episodes April 15 on FX on Hulu.