President Trump Can’t Get What He Wants From ‘Morning Joe’

Analysis: Joe Scarborough and Mika Brzezinski aren't beholden to the White House, and its chief occupant can't forget it 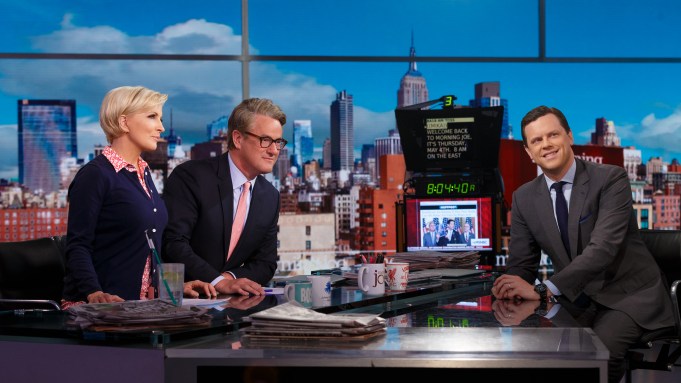 Over the course of his presidency, President Donald Trump has hurled invective at any number of TV journalists, whether it be Don Lemon, Arthel Neville, Neil Cavuto, Nicolle Wallace, Brian Williams, Chris Cuomo, Leland Vittert, Peter Alexander, Yamiche Alcindor, Weija Jiang, Jon Karl or Paula Reid. But he seems to launch his worst material at Joe Scarborough and Mika Brzezinski.

Trump’s continued efforts to stir up debunked conspiracy theories about a former staffer in Scarborough’s Florida congressional office represent just his latest attempt to smear the news hosts. In 2018, some people may recall – it’s hard to do given the sheer volume of White House name-calling – Trump prompted shock when he made remarks about Brzezinski’s appearance. “Crazy Mika” and “Psycho Joe” are phrases he has tried to make common, even though the  hosts have with Willie Geist maintained one of the longest-running anchor teams on a national morning-news program (only HLN’s “Morning Express” crew have been together longer). While the decision to stay at the helm of a A.M. news program may require some degree of insanity, a person without a functioning cerebrum would find doing so difficult.

Why is the MSNBC duo constantly in the cross-hairs of Trump’s White House (no offense to Geist, who seems to have escaped presidential opprobrium – for now)? Simply put, “Morning Joe” has something Trump wants.

Many Republicans have thrown their lot in with this President, but a certain stripe has not. Those include a swath of right-of-center operatives that range from Senator Mitt Romney to political strategist and former John McCain adviser Steve Schmidt. Scarborough is among their number. A former Republican Congressman, he has long burnished his GOP bona fides. In the Trump era, however, those credentials have made him and Brzezinski a target.

“Obviously, Scarborough is a ‘Never Trumper’ who has consistently attacked Trump ever since he ran for president and Trump has returned the favor in spades,” says Mark Feldstein, chair of broadcast journalism at University of Maryland. “And Scarborough’s morning show is a viewing staple inside the Washington Beltway – for Trump it represents the heart of the GOP establishment that opposed him and the president undoubtedly enjoys poking it in the eye.”

Intriguingly, “Morning Joe” has thrived, not faltered, during the Trump presidency. Viewership in the key demographic for news programs – people between 25 and 54, rose 113% between the 2014-15 and the 2018-19 TV seasons. MSNBC said recently that the program snared an average of 1.4 million viewers in April – the highest level the cable network has achieved in that time slot over the course of its history.

On Wednesday’s “Morning Joe” broadcast, Scarborough made plain that Trump’s revival of old canards about the 2001 death of Lori Klausutis, a former staffer who passed away as she worked in a satellite office while he served in Congress, was, ultimately, painful. “The cruelty is unspeakable,” Scarborough said, noting that rumors have been dredged up by people on the left as well.  “It has been happening for 19 years. Donald Trump is right. It wasn’t his original scummy thought.”

The “Morning Joe” hosts don’t take to TV every day in hopes of sparring with the White House. In two conversations with Variety in recent years, Scarborough and Brzezinski have expressed regret at being made Trump targets. “Oh my gosh, I don’t think it helped,” Brzezinski said in an interview earlier this year about the president’s 2018 insults.

But they have also made it clear they can’t endorse Trump’s policies or the direction in which his administration hopes to pull America. “You can’t cheer against the president without cheering against the country that he runs. I felt that way about Barack Obama, whose policies I opposed. I feel that way about Donald Trump, whose policies I oppose,” Scarborough said in a 2017 interview. “When you have a president calling the media “the enemy of the people” — using Stalinist terms that even Russia outlawed after Stalin died — when you have a sitting president question the legitimacy of a federal judge, then you start to have things unwind in front of your eyes that, if followed to their logical conclusion, would lead to constitutional crises.”

“Morning Joe” viewers don’t tune in to hear Geist, Brzezinski and Scarborough praise the White House. They watch because they want to get a sense of the chatter going on among policy makers, congressional staffers and other Washington influencers. “We know the president is watching or the senators are in the gym watching or House members are watching. The media is watching,” Scarborough told Variety earlier this year. “I don’t know, I feel a little more responsibility than I may have before Trump.”

As long as he does, Scarborough has something Trump wants: the fealty of moderate Republicans. There’s no reason to grant it now.