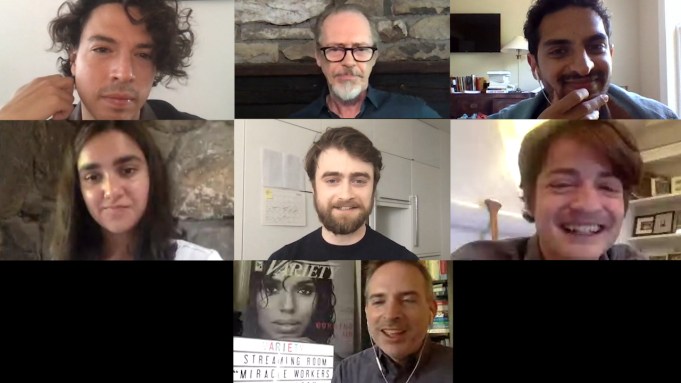 While some television shows get a more luxurious change of setting upon renewal, the TBS series “Miracle Workers” decided to go in the opposite direction. The anthology series’ second season, which debuted back in January, stepped away from the first season set in Heaven and brought viewers into the Dark Ages, into the affairs of the Sh—shoveler family and selfish royals.

Series creator Simon Rich was joined by cast members Daniel Radcliffe, Steve Buscemi, Karan Soni, Geraldine Viswanathan and Jon Bass for a conversation moderated by Variety senior TV editor Michael Schneider in the Variety Streaming Room to discuss how they navigated keeping the spirit of the show within a new setting. The cast also revisited and discussed clips from the second season.

Buscemi suffers the most drastic downgrade in character status in the show’s second season, going from playing God to “Eddie” Murphy Sh—shoveler, the aptly named feces collector of a small town. Buscemi spoke to how he was able to ground his performance by connecting Eddie to his own family’s history.

“When Simon first told me about the character, I just related to him.” Buscemi said. “My dad worked in the sanitation department and he wanted me and my brothers to take whatever civil service test came up when we were 18 and get a civil service job because he thought that that was the way to have security and a good-paying job. Although he was supportive of my acting, he didn’t really think that I could do it for a living. So I really related to this. I felt like I was playing a version of my dad.”

Rich also commented on how Buscemi’s role was vital to conveying not only the comical day-to-day agonies of the time period, but also maintaining the show’s buoyancy.

“At the core of it, we wanted Steve to play a character who had an endless reserve of positive energy,” Rich said. “This is objectively a terrible time in human history, the Dark Ages, where everything is just a living nightmare in every possible way. Wouldn’t it be great to have a character who somehow had enough internal positivity that he was able to persevere and even triumph against this backdrop? So then we were like, ‘Well, how do we just torture this guy as much as we possibly can to make his positive attitude be all the more amazing?’ That was the most fun part of writing the show, was [discovering how to] keep throwing obstacles and rocks at Steve’s character and still have him come up fighting on the other end?… He remains this inspirational character no matter how dark and bleak things get.”

After a clip featuring characters interacting with a horde of ducks, Radcliffe commented on the unique perks to sharing a scene with the restless, flapping creatures.

“We had duck training for a little bit, which was basically just getting the three main ducks comfortable with us holding them or being near them, so that they didn’t freak out. But other than that, there’s very little you can do to train a duck,” Radcliffe said. “Karan and I had a lot of scenes with ducks. A lot of them started with me surrounded by three small fences. They would put all the ducks inside the three small fences with me. And then on “action,” they would fly out the fences. The ducks would do whatever they did. And we just sort of filmed the scene. But it was very fun. It inserted an element of helpful chaos that made those scenes very fun to do.”

While Radcliffe and Buscemi’s new characters serve as strong contrasts to theirs in the first season, Soni and Viswanathan’s characters are similar across both seasons.

“Kind of like Geraldine’s, I feel like both of our [characters] are the closest, where we’re sort of similar from the previous seasons,” Soni said. “So I like to think of it as comfort, the way in for the audience, where they’re like, “Oh, I know. Geraldine’s character is the one who’s going to instigate things.” And then mine’s the one who’s going to break off its shell from being controlled by someone who’s very incompetent.”

With the show reinventing itself in the second season, Rich explained how it was easy for him and the writers to collaborate with such a colorful cast of actors in executing the new setting.

“Our show is unique because it’s probably more collaborative than a lot of comedies, in the sense that the cast are often in the writers’ room,” Rich said. “We have calls with them and meetings with them before the scripts are written. And we work with them to flesh out who the characters are. And so the cast has some ownership over who they’re playing. So it’s a two-way street. It’s not like they just show up on set and are like, ‘Who am I playing this year?’ By the time we touch down on location, we’ve got this real common ground.”