Michael Jordan: ‘When Kobe Bryant Died, a Piece of Me Died.’ Watch His Moving Tribute 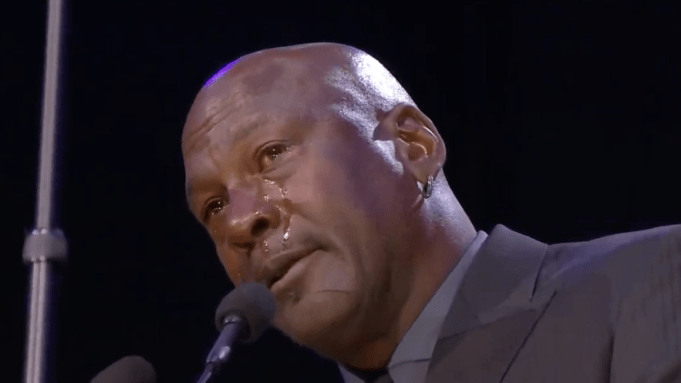 Michael Jordan, arguably the greatest basketball player of all-time, delivered one of the most raw and powerful speeches at Kobe Bryant’s public memorial on Monday. He also provided some much-needed humor.

While remembering his “little brother” Bryant, Jordan, who was fully crying before he even took the stage, couldn’t help but reference a now-classic Internet meme.

“I’ll have to look at another crying meme (of myself) for years,” Jordan quipped, wiping away tears. The 20,000 mourners at Staples Center, all clearly familiar with the “Crying Jordan” meme, burst into laughter.

“I told my wife I wasn’t going to do this because I didn’t want to see (a new meme) for the next three or four years,” he continued. “That’s what Kobe Bryant does to me.”

Bryant was often compared to Jordan throughout his NBA career and regularly sought advice from the Chicago Bulls legend.

“He used to call me, text me 11:30, 2:30, 3:00 in the morning,” Jordan recalled. “Talking about post-up moves, footwork, and sometimes the triangle. At first it was an aggravation, but then it turned into a certain passion. This kid had passion like you would never know. And it’s an amazing thing about passion. If you love something, if you have a strong passion for something, you would go to the extreme to try and understand or try to get it.”

A few months prior to the Jan. 26 helicopter crash that killed Bryant, his daughter Gianna, and seven others, Jordan said he received a text from Kobe.

“(He said) ‘I’m trying to teach my daughter some moves…what were you thinking about when you were growing up trying to work on your moves?’ I said, ‘What age?’ He said, ’12.’ I said, ’12, I was trying to play baseball.'” The crowd of family members, NBA icons and diehard fans howled again. “He texted me back, ‘Laughing my a– off.'”

Toward the end of his speech, a clearly heartbroken Jordan said, “When Kobe Bryant died, a piece of me died. And as I look in this arena and across the globe, a piece of you died…(But) I promise you from this day forward I will live with the memories knowing that I had a little brother that I tried to help in every way I could. Please, rest in peace, little brother.”

Watch the full speech below: