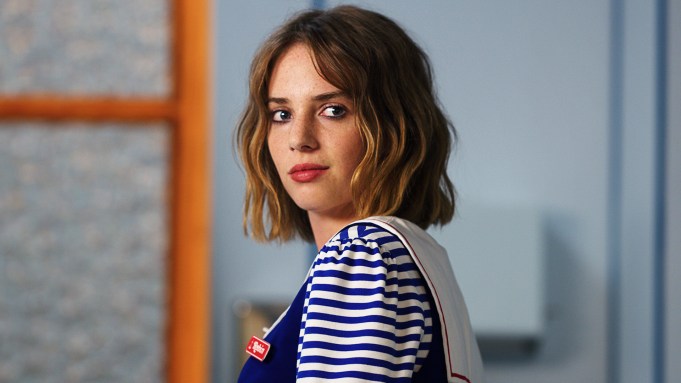 Netflix’s nostalgia-saturated sci-fi series “Stranger Things” thrilled fans and broke Netflix viewing records when it roared back in summer 2019 with a triumphant season three set in 1985.

Besides the SAG Award-winning ensemble that viewers came to know over the first two seasons, “Stranger Things” season three introduced new characters. One addition was Robin, played by relative newcomer Maya Hawke, one of Variety’s 2019 Actors to Watch. Robin became a foil for the perpetually pompadoured Steve (Joe Keery).

In the latest installment of Netflix’s FYSEE TV series “Scene Stealers,” Hawke joined Emmy-winning casting director Carmen Cuba to talk about how it feels to fangirl a show and then land a role on it. The series, hosted by Variety’s Jenelle Riley, pairs the streaming service’s award contenders with the casting directors who helped them get their parts.

Says Hawke, “For an actor, you’re a fan of the show not just as an entity…You’re a fan of the people who make it, the action that goes on in it, the dialogue, the environment [and] the fun it looks like people are having.” Given the chance to compete for a role on Matt and Ross Duffer’s fantasy drama, “I didn’t have, like, a fandom reaction,” she says. “I had a thrilling reaction to the idea I could get to say that dialogue that the Duffer Brothers write so intelligently and so specifically.”

Cuba, who cast the “Stranger Things” ensemble from scratch, has a unique set of challenges when it comes to adding new players, most importantly, the secrecy surrounding the series.

She explains that the twin brothers, who are the show’s creators and executive producers, “start talking about the characters as soon as they start thinking about them. So that’s usually before they start writing them.

“I can start looking out [for actors that would be right], because [the Duffers] know I’m always casting a bunch of things,” Cuba confides. “I can always sort of pretend to be looking for one thing while I’m looking for another, especially with this show. We have to do a lot of that.”

The Duffers and Cuba knew Robin was going to be a demanding role with a lot of dialogue, so Cuba had to find an adaptable and verbal actor. That’s when she used one of her favorite casting techniques: seeking recommendations from other actors. She asked thesps on the film she was casting at the time who they thought was good. Hawke’s name came up. And while Hawke didn’t snag a role in that film, Cuba kept the New York native in mind for “Stranger Things.”

Robin is an ancillary character who keeps Steve on his toes at Scoops Ahoy, a local ice cream shop and source of summer employment for the young people of Hawkins, Indiana. Former enemies in high school, the two bond at the newly opened Starcourt Mall and become unlikely friends as they eventually help Dustin (Gaten Matarazzo) and Erica (Priah Ferguson) — a.k.a. the other half of the Scoops Troop — and the rest of the gang defeat shadowy Russians and a horrifying Demogorgon.

Keery and Hawke’s chemistry had some fans shipping the two, but their hopes were dashed when Robin came out to Steve as a lesbian. But Steve, who had been falling for Robin, proves worthy of Robin’s confidence and encourages his new bestie to live authentically and choose the right girl. The honesty and friendship that comes after their heart-to-heart had fans on social media — as well as Hawke herself — rooting all the more for their platonic bond.

“Men and women aren’t really allowed to be friends onscreen,” Hawke says. “There’s always this undercurrent of one-sided love or two. It’s very refreshing to see a bond between a man and a woman that isn’t transactional, that isn’t romantic. It’s their togetherness that comes as a true friendship in understanding through opposition. Seeing that is almost revolutionary.”

Hawke says she enjoys the connections that she has formed with Keery, Matarazzo and Ferguson and admires the joy the whole cast taps into regularly. Keery is a comedic savant, she says, and Ferguson and Matarazzo have acting abilities that belie their ages.

“I felt so fortunate,” Hawke says. “Joe [Keery] was an incredible leader. He sees humor in everything and he sees depth where depth lies. And Gaten and Priah are so unbelievably talented. Priah definitely gets ‘most likely to succeed,’ ‘most prepared,’ ‘most intelligent’ [and] ‘most hardworking.’ And Gaten and Joe’s love of the show, their comfort, their chemistry together — the whole thing. I felt we came together really well and it was an honor to be a part of that.”

Hawke says she also found real-life liberation in the way Robin fumbles through the world but lands on her feet.

“I love playing this character. She really allows me to embrace parts of myself that I’ve often tried to hide,” Hawke says. “She has this darkness to her, this kind of physical awkwardness, a little bit of a social outcast feeling to her and an intense intelligence. Those are all pieces of my personality, but they’re not necessarily the ones that I try to put first.”

Hawke adds that as she got more comfortable with the Duffers and the show’s environment, the brothers added more of her own personality to Robin, giving the rising star an even stronger sense of ownership and kinship with the role.

Cuba says that this level of confidence and adaptability is crucial when joining an already established show.

“It’s a very tricky thing to try to step into as each season passes,” she says. “Because that core, original group is very comfortable with themselves, with their characters, with the process, with the directors. You have to really test, however you can, how this person will be able to step into [his or her] character while also stepping into this phenomenon.”