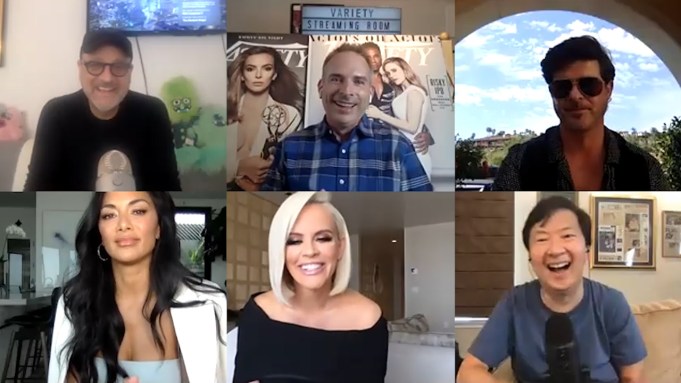 Face coverings aren’t just worn during a pandemic; they’ve also been a staple of “The Masked Singer” since early 2019.

The cast and crew began shooting for season 4 on Aug. 20 with safety guidelines in place as the coronavirus continues to spread in the U.S. The show features celebrity contestants, hidden inside elaborate full-body costumes, who perform for a panel of judges who attempt to guess the star beneath the mask.

With the new season in development, the show’s executive producer Craig Plestis and celebrity panel joined the Variety Streaming Room, moderated by Michael Schneider, to discuss the feel-good nature of the competition, judges’ strategies for guessing and the start of season 4 amidst a pandemic. The judges includes Nicole Scherzinger, Jenny McCarthy Walberg, Robin Thicke and Ken Jeong.

All four judges have been on since the opening season, but even with experience, they often find it difficult to come up with a name for who could be in each costume. Aside from analyzing the voice of each performer, the panel is shown video clips with clues about the person’s personal life, which helps each panelist to varying degrees, according to Thicke.

“As the episodes develop, Jenny continues to help connect dots,” Thicke said. “I don’t know most personal things about these people. I know some of their career accomplishments, I might know their voice, the sound of their voice or their height.”

For McCarthy, though, it’s much easier. She hosts “The Jenny McCarthy Show” on SiriusXM and has been part of shows like “The View.”

“I’m interviewing a lot of these people who are on the show. I’m either gossiping about them or I’m interviewing them,” she said. “So my broadband has more than I want to know about celebrities, to be honest, but it at least comes in handy. Also, I’m addicted to clue things, like mysteries. Before the season starts, except for this season, I used to go to those escape rooms and practice with clues. I want to get my brain fired up.”

There have also been a couple surprises on the show, from Lil Wayne becoming the first eliminated member of the season 3 competitors to the end of Dionne Warwick’s run as the Mouse.

But celebrity status means nothing from behind a large costume. Thick said that the trick to going far on the show is creating an engaging performance or making the audience laugh and feel connected to the character – even if it’s hard to maneuver as an oversized Robot.

Season 4 is set to air this fall, and Plestis said the adaptations crew made to maintain safety measures have actually helped, rather than hindered the show’s development. There will be a virtual audience who has power to influence the outcomes of each episode, as well as new characters and innovative versions of the recorded clue concepts.

New costumes will follow underwater and food-based concepts, with the latter following on the heels of the Banana character’s popularity amongst fans. There are also two more surprise designs that Plestis said he cannot reveal details for but that he believes are sure to be a worldwide hit.

“Obviously it’s difficult shooting during the pandemic, but it’s made us be more creative as producers than we have ever been,” Plestis said. “You’re going to see some incredible innovations this season, because we’re forced to be more creative and you’re going to see different ways we do the stage productions. The clue packages are completely different this season. The costumes: there are costumes that season that we’ve never done before in the history of ‘Masked Singer,’ either in America or around the world, that people will be talking about it.”