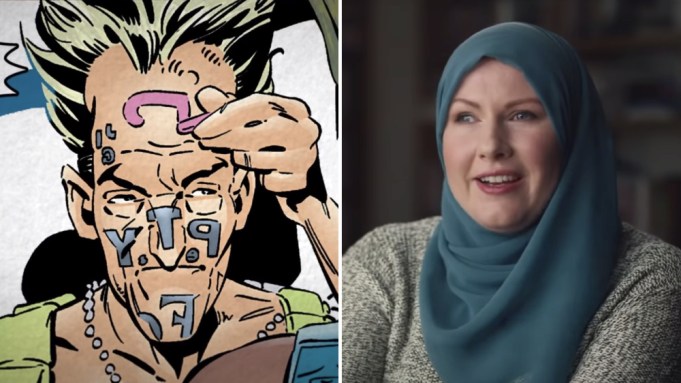 Usually a massive presence at San Diego Comic-Con, Marvel Entertainment is largely sitting out this year’s virtual iteration of the 50-year-old fan convention, Comic-Con@Home. That is, save for a panel on “Marvel’s 616,” a Disney Plus docuseries that covers the history of Marvel Comics through the lens of a series of individual filmmakers.

Actors Gillian Jacobs (“Community”) and Paul Scheer (“Black Monday”) joined the panel to share their experiences directing episodes for the series, the first time either had made a documentary film. Jacobs and Scheer joined executive producer Sarah Amos (also vice president of development and production for new media at Marvel) and executive producer Jason Sterman (whose production company Supper Club made the series) to talk with moderator Angélique Roché about their differing approaches to their episodes.

Sterman explained that “Marvel’s 616” was designed to feel as tonally and thematically disparate as the vast universe of Marvel Comics, so that each filmmaker for the series eight episodes could dive into the history of Marvel “in their own unique way.”

To demonstrate, Roché played clips from Jacobs and Scheer’s episodes that Disney Plus released wide on Wednesday. The clip from Jacobs’ episode, “Higher, Further, Faster: Trailblazing Women of Marvel Comics,” tracks the creation of Ms. Marvel, the first female Muslim superhero in Marvel comics history. Jacobs interviewed Sana Amanat, vice president of character and content, Marvel Entertainment, about how her experiences as a Muslim woman inspired the company to create a character who spoke to her experiences. Amanat then recruited Muslim writer G. Willow Wilson, who couldn’t quite believe what Marvel wanted to do.

“I was like, you’re going to have to hire an intern just to open all this hate mail,” Wilson says in the clip. “It just seemed like waving a red flag in front of all of the people who thought that people like me and Sana should not be in comics at all.”

On the panel, Jacobs said that when she came to the project, she knew practically nothing about comic books at all: “I don’t think I’d actually read a comic all the way through, so this was a really exciting process for me of getting to learn about Marvel and falling in love with comics.”

To grasp how the comic book industry evolved to be so dominated by men, Jacobs said her research took her back to the origins of the industry in the 1920s and ’30s. However, although Jacobs said the experience of making her episode led her to regret all the years she hadn’t been reading comics, she never explained how she got involved with the “Marvel’s 616” project in the first place. (The panel also skipped over the origins of the show’s title, a reference to “Earth 616,” the version of Earth within the Marvel comics multiverse where most of the stories take place.)

By contrast, Scheer is a die hard comics fan who has authored Marvel Comics titles himself. His episode, “Lost and Found,” followed his quest to learn about other Marvel Comics writers’ favorite obscure and forgotten characters who’ve appeared within Marvel’s pages. The clip from his episode included Doctor Druid, a “bargain basement” Doctor Strange; Typeface, a villain who paints letters on his face and then throws letters as weapons; and the Whizzer, who achieved his ability to run super fast by injecting himself with mongoose blood.

“We all know the major players, but then there’s that weird uncle that you only see once every four years,” Scheer said during the panel discussion. He also mentioned other Marvel characters like U.S. Archer, who has essentially a CB radio installed in his brain, and Hellcow, a cow who is bitten by a vampire and becomes a vampire cow.

There is an intriguing — and seemingly unintentional — tension between Jacobs and Scheer’s approaches. They both obviously sought to cover less well-known territory within the Marvel universe, but while Scheer’s base of knowledge within Marvel is much deeper and more personal than Jacobs’s, the clip from his episode did not feature any female writers or characters. (During the panel, Scheer did mention Asbestos Lady — powers self-explanatory.)

For her part, Amos said that one of her goals with “Marvel’s 616” is to capture the vast diversity of Marvel’s audience and subject matter.

“A lot of people have an idea of what Marvel fandom or Marvel fans look like, or what the people behind the comics look like,” she said. “And the thing I love so much about the series is we’re going to introduce you to so many different types of faces and different types of people who have been so integral to the stories we tell and the content we create, and haven’t all necessarily had a moment in the spotlight.”