‘The Mandalorian’: Which ‘Clone Wars’ Character Joins the Action? And More Burning Questions From Episode 3 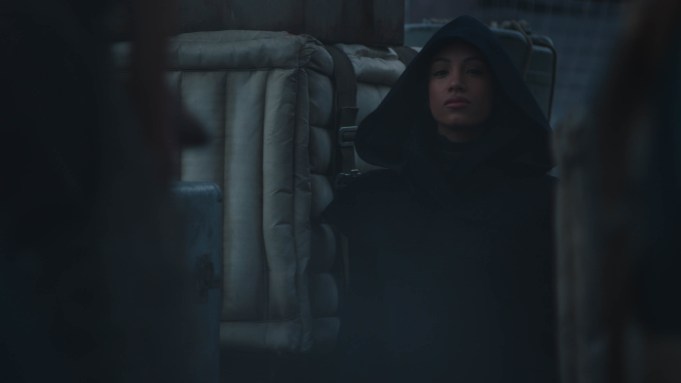 (SPOILER ALERT: Do not read on if you have not watched the third episode of season 2 of Disney Plus’ “The Mandalorian.”)

The episode begins with Mando, Baby Yoda and Frog Lady finally arriving on the planet of Trask, where the latter is touchingly reunited with her froggy husband.

Mando was promised that he would find fellow Mandalorians on the planet, and sure enough, it doesn’t take long before a trio of Beskar-armored warriors save him and Baby Yoda from a group of nasty squid sailors who try to feed them to a Kraken-esque monster.

But these aren’t just any Mandalorians. They are led by none other than Bo-Katan Kryze (played by Katee Sackhoff), a fan-favorite “Clone Wars” character, leader of the Nite Owls and sister to the Duchess of the planet Mandalore. Mando is then thoroughly perplexed when Bo-Katan and her Mandalorian crew of Koska Reeves (Mercedes Varnado a.k.a. pro wrestler Sasha Banks) and Axe Woves (Simon Kassianides) take off their helmets and reveal “they way” that he adheres to was in fact created by a group of religious zealots called the Watch. There are more ways than one, it turns out.

Bo-Katan promises to tell Mando where to return Baby Yoda to the Jedi, only if he helps her steal an Empire cruiser ship. Together, the four from Mandalore are up to task, and Bo-Katan gives Mando a piece of information that will send “Clone Wars” fans into a frenzy.

But no more Beskar-ing around, here are some burning questions from Chapter 11:

What is the Darksaber and why does Bo-Katan want it so desperately?

At the end of last season, we saw Moff Gideon (Giancarlo Esposito) slicing his way out of his downed fighter using the Darksaber, an ancient black-bladed lightsaber which Bo-Katan once wielded in her fight to regain control of Mandalore (that’s perhaps a feeble attempt to summarize seven seasons of “Clone Wars” lore). At some point during the Great Purge, which saw the Empire murder almost every Mandalorian around, the Darksaber fell into the hands of Moff Gideon. In the episode, he appears before the captain (“Bosch” star Titus Welliver) of the ship Bo and Co. are trying to steal. We discover that Moff Gideon is well aware that Bo is after him and the Darksaber, setting up a potentially epic fight for the ancient weapon at some point int he future.

Who is this Ahsoka Tano that Mando is told to find?

Well, dear reader, Ahsoka is the lead character of the “Stars Wars” animated series “The Clone Wars” and also happens to be Anakin Skywalker’s former apprentice. Mando is told that she can be found on a forest planet far away, and that she is the person to whom he should return Baby Yoda. But that raises the question of what exactly Ahsoka has been up to in the intervening years between the end of “Clone Wars” and the fall of the Galactic Empire. We know, of course, that she was among the deceased Jedi spirits who guided Rey in her fight against Darth Sidious in “The Rise of Skywalker,” but it’s fair to say Jon Favreau, Dave Filoni (who also created “Clone Wars”) and the writers still have plenty of blanks in her story to fill in.

Who will play Ahsoka Tano?

Earlier this year, Variety reported that “Briarpatch” star Rosario Dawson had been cast to play the powerful Jedi. Neither official Disney sources nor Dawson herself have confirmed this at present, but viewers likely won’t have to wait long to see Dawson (or whoever it may be) bring the badass Togruta alien to life.

After the Baby stirred up a little controversy online last episode for snacking on Frog Lady’s unfertilized eggs, this time he got a nice steaming bowl of chowder put in front of him. But a pesky little squid thing jumps out of the bowl and onto Baby’s face when he is only a couple of spoonfuls in. While Mando is off galavanting with Bo-Katan, he leaves Baby in the care of Frog Lady and her husband, who have managed to fertilize one of her eggs into a tadpole-like creature. When Mando comes to pick him up from froggy daycare, Baby Yoda is playing with the tadpole. Whether or not he wants to eat it or has learned his lesson is unclear, but fortunately Mando whisks him away before we can find out.