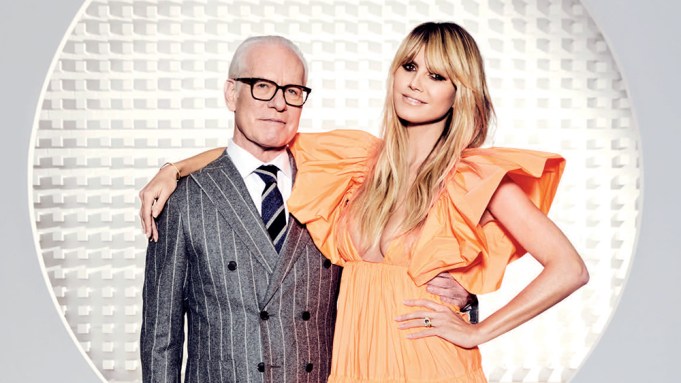 SPOILER ALERT: Do not read if you have not yet watched the season finale of “Making The Cut” Season 1.

Auf wiedersehen to “making it work.” Now, it’s all about “Making The Cut.”

In the season finale, Los Angeles native Jonny Cota managed to win it all over Esther Perbandt, who, in the beginning, seemed to be the frontrunner for top slot. His 20-look collection is now available on Amazon Fashion and he has $1 million to invest in his global brand — though, host Heidi Klum wants to know if he still plans on splitting his winnings.

Following the somewhat shocking season finale of the new Amazon Prime Video reality competition show, former “Project Runway” pair Klum and Tim Gunn talk with Variety about their thoughts on the winner, the addition of overnight seamstresses and fashion amid COVID-19.

Jonny won! Were you surprised?

Tim Gunn: Well, yes for me. There were quite a few times where I thought Jonny was going home.

Heidi Klum: I had about three or four where they were kind of juggling around, where the top for me in my own head kept changing. For me it was always between Jonny, Esther, Ji [Won Choi]. It wasn’t from the very beginning that you were like, “OK this person is going to win.” The balls were in the air and they kept on juggling.

Gunn: Let me add this too: I wasn’t surprised by the final outcome, especially after Jonny met with the president of Amazon fashion, because his presentation was phenomenal. By the time we left Japan, we knew there were only three possibilities, Jonny being one of them.

Klum: He understands what his brand is. I feel like he always had a very strong story to tell, understood the designer he is [and] who he designs for. To me, he always had a very clear brand identity and I think it’s well-deserved and I wish him great success. I wonder though, he did say a few times, “I’m going to share the million dollars with you!” I wonder if he’s going to do that. I feel like he said that to a few people. Do you remember this Tim?

Gunn: I don’t remember to be honest!

Gunn: He’ll have a lot of explaining to do to the IRS.

Lots of viewers were disappointed when Megan got cut. Can you discuss that decision?

Klum: It’s a competition. It’s a rollercoaster ride of emotions. I think that they’re all very good, but who can survive under this pressure cooker? You always have to make something on the spot in a very short time and not everyone rises to that occasion. I feel like she maybe had a harder time.

Gunn: When we get down to as few as six designers, there are no good decisions. Everybody deserves to be there; everybody’s extremely talented; everyone’s motivated, and the decisions are agonizing.

This season’s cast was full of characters and so dynamic. What were you looking for while casting?

Klum: A variety: Variety of design aesthetic, a variety of people. They all have different backgrounds — they come from different parts of the world — that was important to us. It’s not just being loud and flamboyant, some people are not like that: some people are more quiet. In terms of age, we did not want to exclude anyone. If they were already designing for more years than, for example, Sander [Bos], who is still super young, it’s really about their talent and about their brand or the brand that they want to have.

“Project Runway” viewers seemed to be a little shocked at the overnight seamstresses. What do you think that factor adds to the show?

Klum: Well it’s always hard when people watch something for so long and they look at something and say, “Wait a minute, that’s different!” Well it is different, because it’s a different show.

Gunn: We wanted the designers to be as ambitious as possible and when you have to sew every stitch, there’s only so much you can do. And also, since the show is about branding and it’s not about analyzing a janky hemline, we wanted to see how the designers were able to supervise a staff, to direct people. Some of the designers were very profound control freaks and didn’t want to use the seamstresses, but as the show progressed they realized that was a tremendous disadvantage.

Have you received any of the winning looks?

Klum: I have all of them, of course!

Gunn: Heidi, who’s speedily buying them for you? Are you?

Klum: My office sent them all to me. I got everything! I wish we were out and about so I could model them.

Can you talk about the decision to give designers full profits of their winning looks sold on Amazon?

Klum: When we knew about the pandemic, we wanted to make sure that we were supporting the designers 100%, especially in this time because everyone is having a hard time and people don’t know where the next dollar is coming from. People really responded to everything and bought a lot, which was a surprise to me in a way — not a surprise because I didn’t believe in the pieces, but just in the time that we’re living in.

Gunn: I share Heidi’s surprise at how quickly everything sold out. We’re just enormously grateful to Amazon for being so generous to the designers.

Gunn: And selfishly, I can’t wait for Jonny’s collection because he has menswear.