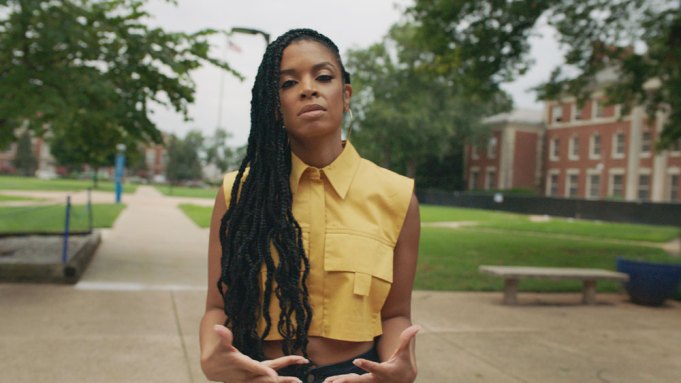 Actor Susan Kelechi Watson is lifting the curtain on her work as executive producer on “Between the World and Me,” the HBO Max special which adapts Ta-Nehisi Coates’ 2015 New York Times-bestselling book, which explores the ways in which American society structurally supports white supremacy.

“It has been something that I’ve always wanted to do; I always felt like there was content that I wanted to bring to life,” Watson says in a video interview for HBO’s “Power of Visibility: The Craft” digital campaign. “I felt strongly that Ta-Nehisi’s book was something that we needed to hear as a country, so we can metabolize a lot of the grief that we were going through. And I felt like he was saying so many things that I wanted to say, but didn’t have the words for. And I was really surprised at how universal his personal experience was, so it just felt like the perfect script for a time like this.”

“Black stories are just as important as any white story that’s being told that has been sort of held up on this pedestal. And so, it’s really about letting everybody have a voice,” Watson continues. “I remember growing up and seeing Black artists and Black performers and something about that was very empowering. That’s why people say representation matters, I know it does. To be able to see something that looks and feels like them, specifically, is so important.”

Watson’s account is just one of the stories from behind the scenes of “Between the World and Me” that the network will share as part of its “Power of Visibility” campaign for the film, an initiative intended to capture the perspectives of diverse crew members who work on the brand’s projects. The film’s “POV” pieces will also highlight author and executive producer Coates, the film’s director Kamilah Forbes, executive producer Roger Ross Williams, producer Alisa Payne and COVID production manager Robyn Davis.

“There are two important goals tied to the POV initiative: one is to showcase the talent who make our content possible and the other is to demonstrate to up and coming multicultural and international creatives that they too can dive into their passions and skills to build an exciting career,” Lucinda Martinez, WarnerMedia’s EVP, HBO and HBO Max brand, Multicultural and International Marketing, tells Variety. “However, we do not hide the fact that for many people of color, the journey to get there can be difficult. Similarly, ‘Between The World And Me’ holds no punches about the difficulties that people of color face while also expressing the joy and hope that we find in the process.”

Martinez and her team launched the “POV” initiative in 2018 with content pieces, media placements and other experiences intended to celebrate the diversity of HBO Max’s programming behind the scenes. To date, the network’s “The Craft” video series has featured nearly 100 multicultural and international behind the scenes crew. Other “POV” talent initiatives include masterclasses and moderated discussions at major festivals like the Sundance, Essence Fest, New York Comic Con and the Urbanworld Film Festival.

Of the project’s goals, Martinez says, “We certainly hope to inspire more Black creators to pursue their dreams and hope we continue to have more opportunities to work with them over time. It is WarnerMedia’s priority to continue to expand upon the diversity of our creative family.”

Up to this point in 2020, HBO says that original programming produced by Black creatives increased by 10%, with the amount of overall deals for talent of color increasing by 5%. Women and people of color directed 55% of WarnerMedia’s scripted episodes and made up 56% of their writers.

“Our HBO marketing team’s track record played a role in the team behind ‘Between The World And Me’s’ consideration in partnering with HBO vs other distributors,” Martinez explained. “Not only did they understand the prestige and proven track record that the HBO brand and HBO Max platform offers but they also had a deep trust in our ability to launch this title in a culturally meaningful way, largely based on previous campaigns such as ‘The Apollo’ documentary the year before.”

“The Apollo,” which picked up the Primetime Emmy for outstanding documentary or nonfiction special in September, was directed by Williams, who produces “Between the World and Me” under his One Story Up banner.

Forbes — who also serves as executive producer at the Apollo Theater — adapted and staged a presentation of the book at the theater in 2018. The story, written as a letter to Coates’ teenage son, recounts the author’s experiences growing up in Baltimore’s inner city and his growing fear of daily violence against the Black community. As a filmed production, “Between the World and Me” is presented as a sequence or powerful readings and monologues from a star-studded list talent (including Mahershala Ali, Angela Bassett, Coates, Angela Davis, Janet Mock, Phylicia Rashad, Joe Morton, Wendell Pierce, Yara Shahidi, Courtney B. Vance, Watson and Oprah Winfrey). Many of the segments, which are mixed in with archive footage and animation, were taped inside the actors’ homes.

“The team that brought ‘Between the World and Me’ to life performed an amazing feat, which was telling a dynamic story featuring nearly 30 incredibly talented individuals, during COVID,” Martinez says. “In order to tell such a story, Kamilah and her team made a point to hire a crew that was not only diverse, but thoughtful. We learned, in speaking with the various crew members, that their experiences and what they hope to see in the world, came through in their work on the project. This special is important because it will encourage a genuine dialogue about the experiences of Black people in America and we hope that our “Craft” pieces, which feature our ‘POV’ talent, help to continue that story.”

Speaking of the team behind the project, Forbes tells Variety, “We’re primarily African American [with] a huge number of women in leadership roles. And this was inherent to the project, but it was also intentional, knowing the stories we were telling and also that we wanted to make sure opportunity was given.”

“This is my directorial debut [on-screen], so inherently here’s opportunity given; it would have been very easy for them to have gone to another director with a huge amount of film credits. I think it’s important to consistently, with our hiring, pay it forward,” she continues. “The process is just as important as the product and I’m bringing those tenets of what you want to share with the world, into the way you share it with the world.”

Outside of the “Power of Visibility” campaign pieces, HBO Max is taking “Between the World and Me” and its message back to its pseudo-birthplace of Howard University.

This exclusive event follows a $1 million gift given to the university in July, in order to establish the Coates-Forbes-Watson-HBO Dream Seekers Endowed Fellowship. The endowment fund, named for the “Between the World and Me” creative team members and proud Howard Bison, will benefit students pursuing careers in the arts and entertainment industries.

In a joint statement, Coates, Forbes and Watson said: “As products of Howard University, we deeply believe in the responsibility to give as much as was given to us. We are inspired to see that same spirit in HBO’s gift to Howard–an institution which has not just given so much to us, individually, but to all of America.”

Students from a variety of disciplines can apply, including communications, fine arts, business, and law, for the stipends intended to use toward living and travel expenses related to accepting internships in entertainment hubs like Los Angeles and New York.

“With all of our companion podcasts, we aim to delve deeper and peel back the layers of our stories,” HBO’s director of digital content Michael Gluckstadt explained. “We believe ‘Between the World and Me’ is required reading and now viewing, and we wanted to provide an additional way for our audience to unpack the important messages of the film. In the four episodes of the podcast, [Watson] weaves together discussions with thought leaders, creatives, and individual families that do just that.”

“Between the World and Me” debuts Nov. 21 at 8pm on HBO and streaming on HBO Max.

Danielle Turchiano contributed to this story.