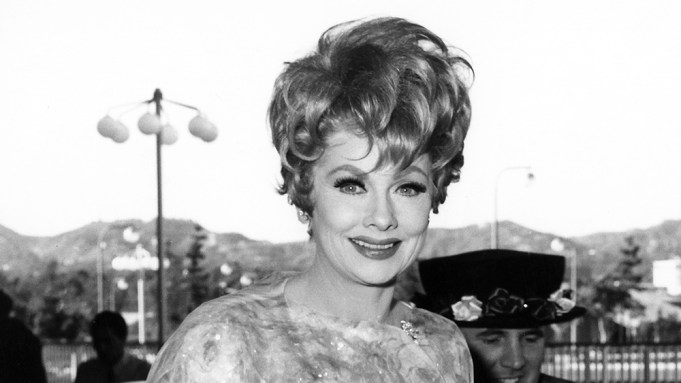 Autobiography: “Love, Lucy,” published posthumously in 1996, from a memoir Ball wrote in the mid-1960s.

Behind the scenes impact: With her husband and “I Love Lucy” co-star Desi Arnaz, Ball was a TV pioneer who etched an enduring template for TV sitcoms shot on film, which ignited the syndication marketplace for TV. Known for her signature flame-red hair color, Ball was also the first woman to head a major TV studio, Desilu Productions, which she and Arnaz formed to produce “I Love Lucy.” The pair built Desilu into a powerhouse TV studio that produced or provided production services for such 1950s and ‘60s TV series as “Star Trek,” “Mission: Impossible,” “The Untouchables” “Our Miss Brooks,” “Make Room For Daddy,” “December Bride” and “Whirlybirds.” Ball took over the company a few years after she and Arnaz were divorced in 1960. In 1967, Ball sold Desilu for $17 million to Gulf + Western, which bought Paramount Pictures around the same time.

Why she mattered: Ball fought the systemic racism of her era when CBS executives balked at having her star in a TV series with her real-life husband, the Cuba-born bandleader. The executives thought America would never accept a show revolving around a multi-ethnic marriage. Ball and Arnaz proved them wrong by touring the country in 1950 with a cabaret comedy act that was a smash hit. By spring 1951, Ball and Arnaz had deals with CBS and sponsor Philip Morris for the series that became “I Love Lucy.”

Her big break: Ball studied acting in New York and moved to the West Coast in the early 1930s. As a leggy ingenue, she landed numerous uncredited roles including one as a Goldwyn Girl in 1933’s “Roman Scandals.” She bounced around in bit parts at Columbia Pictures and 20th Century Fox before securing a seven-year contract at RKO in 1935 (Daily Variety noted that Ball was one of four “girls” to land deals with RKO). She was a player in mostly mediocre comedies during her time at the studio — with notable exceptions such as 1937’s “Stage Door.” She met Arnaz when the two were cast in 1940’s “Too Many Girls.” The pair tied the knot in Greenwich, Conn., on Nov. 30, 1940.

First appearance as a redhead: 1938’s “The Affairs of Annabel.” Before that she’d been a brunette and a blonde.

Last public appearance: Ball appeared as a presenter with Bob Hope on the 61st annual Academy Awards telecast held March 29, 1989, less than a month before she died. She received a rousing standing ovation that left her “noticeably overwhelmed,” as Variety observed.

Deep dive: Lucille Ball is the definition of a TV icon — so much so that she was formally christened “the first lady of television” at an Academy of Television Arts & Sciences event in 1969.

Ball famously conceived the notion of starring in a TV comedy with Arnaz as a means to stabilize their marriage at a time when her husband was often on the road touring with his band. She had been starring in a radio show for CBS, “My Favorite Husband,” that was so popular CBS decided to adapt it for the fledgling medium of television. At every step, Ball and Arnaz made “I Love Lucy” on their own terms — starting with writing the $5,000 check to finance the production of the pilot. The start of the series was heralded by Desilu with an ad in the Sept. 5, 1951, edition of Daily Variety.

CBS and Philip Morris expected the show to air live from New York, as was the standard for most other TV comedies in that day. Ball and Arnaz didn’t want to move away from the West Coast, where they lived on a spacious five-acre ranch in the L.A. suburb of Chatsworth that was also dubbed “Desilu.” Arnaz came up with the idea of shooting the show on film. CBS and Philip Morris told the couple they would have to take a pay cut to help offset the additional expense. In exchange, Desilu got full ownership of the episodes after their initial airing.

“I Love Lucy” blossomed into a massive hit within weeks of its debut on Oct. 15, 1951. America fell for the antics of Lucy and Ricky Ricardo and their neighbors, Fred and Ethel Mertz (played by William Frawley and Vivian Vance). The line between fact and fiction blurred in January 1953 when Ball gave birth to her second child, Desi Arnaz Jr., on the same day that America watched the Ricardos become parents to Little Ricky. The momentous episode delivered massive ratings.

The success of “I Love Lucy” allowed Ball the unique pleasure of buying the Hollywood studio where she had once been under contract. In 1958 Desilu sealed the deal to buy two studio lots from RKO for $6.1 million. One was at the corner of Melrose and Gower (right next door to Paramount Pictures); the other was what is now known as the Culver Studios in Culver City (next door to Sony Pictures). That same year, Desilu sold the rights to 180 “I Love Lucy” episodes to CBS for $4.5 million, a windfall that helped finance Desilu’s expansion as a production and production services company. By 1957, Desilu had more than 800 employees and $21 million in revenue. The company had an initial public stock offering on Dec. 3, 1958, making Ball a rare example of a female corporate officer in Hollywood at the time. By 1962, Ball had bought out Arnaz’s share of the company and went solo as Desilu president.

Ball’s decision to divorce Arnaz after the couple ended their run on CBS in 1960 was a shock to the general public. But America never stopped loving Lucy, and Ball never stopped working. Although “The Lucy Show” and “Here’s Lucy” didn’t have the same pop culture impact, her shows were highly rated. She married comedian Gary Morton in November 1961.

After making mostly forgettable movies in the 1930s and ‘40s, Ball tried to make a splash on the big screen with the 1974 adaptation of musical “Mame.” But the movie was a flop.

Ball had two notable TV projects in the 1980s. The 1985 TV movie “Stone Pillow,” featuring Ball in a rare dramatic turn as a New York City bag lady, earned strong notices. “La Ball is on a roll,” Variety enthused in its review. But the following year, Ball struck out in her fourth sitcom attempt. The much-ballyhooed comeback vehicle “Life With Lucy,” produced by Aaron Spelling for ABC, was canceled after just a few episodes.

Ball and Arnaz had a tumultuous marriage, by many accounts, but the bonds between the former partners in life and business ran deep. Arnaz died at age 69 on Dec. 2, 1986. Two days later, Associated Press reported that Ball was seen weeping at the memorial service for Arnaz. “He was a great part of our innovation in this business,” Ball told the AP.

As many of Ball’s co-stars noted over the years, the first lady of television was generous and loyal to the end. Her daughter, Lucie Arnaz, paid tribute to the beloved icon with an ad in Daily Variety on the one-year anniversary of her passing.