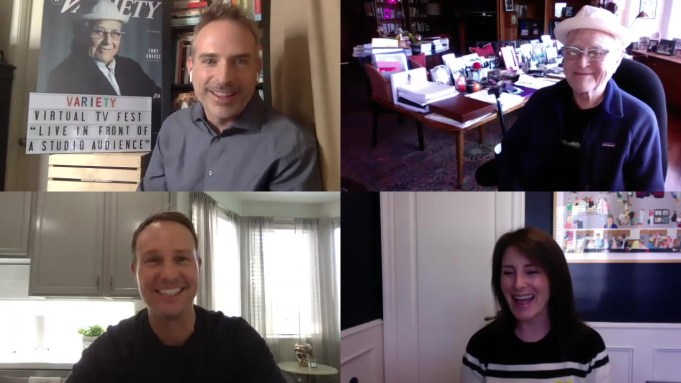 “Live in Front of a Studio Audience” executive producers Norman Lear and Brent Miller, and director Pam Fryman had enough on their plate when the special aired on Dec. 18, 2019. Little did they know they would be working through some major breaking news — the impeachment of President Donald Trump.

“They were kind enough in Washington to hold back on everything until we finished,” Lear joked with Variety‘s senior editor Michael Schneider.

“We never stopped once,” Miller said. “And if they had to have a delay, because there was a specific announcement that was being made, they stopped from the live broadcast, but we kept going as if it was live. And then they just continued on as if we’d never skipped a beat. So it was really great because it allowed the actors to still stay in the moment and allow Pam to do her thing. And it allowed it to feel as organic as possible without the craziness that was surrounding us in that moment.”

Fryman, who is one of the most respected TV directors, said that she got involved in the second special because she could not say no to Lear and Miller.

“Plus Jimmy Burrows did the first one and he called me as well and said, ‘You’re doing this and you’re not allowed to say no,'” she joked. “I believe that’s a direct quote. So I was thrown into it and it was a remarkable experience truly from beginning to end.”

The trio also talked about the importance of the multi-camera format, which has fallen out of favor in recent years due to the rise in popularity of single-camera comedies.

“There’s nothing like an audience,” Fryman said. “We certainly experienced it on ‘One Day at a Time,’ but it’s really special — the energy that you get and reacting to that feedback. It’s all about that. It’s theater.”

“Both forms are important,” Lear said. “They’re very different. Live in front of a studio audience, it’s like doing a one-act play. That’s why we tried to do everything in one set and if we can make it, we don’t stop. It’s one continued piece. It’s a very different experience from no audience, which is much more filming.”

The first two specials have focused on shows from Lear’s portfolio from the 1970s. According to Miller, they may change things up for the next.

“We may switch decades and explore the ’80s,” he said. “Because there are a handful of shows that were loved by many, and many people don’t even realize that Norman was associated with them. It was his company at the time that was making them. Everything from ‘227,’ ‘Who’s the Boss,’ ‘Facts of Life.’ A lot of these shows that people don’t always realize were part of Norman’s library.”