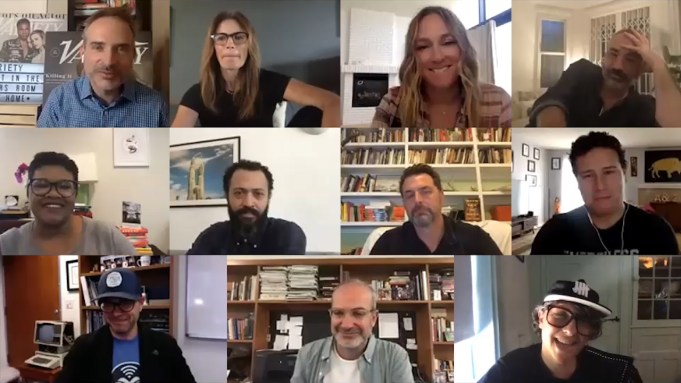 One would have thought that self-isolation brought about by the coronavirus pandemic could lead to “the most fruitful productive time” for writers, as “Defending Jacob” showrunner Mark Bomback put it.

However, Bomback and a group of showrunners and writers from some of the year’s biggest limited series and TV movies testified at Variety‘s virtual “A Night in the Writers’ Room” event Thursday night that the pandemic and Black Lives Matter protests are making writers question the projects they have in the works and strive to say something more urgent.

“One of the tiny slivers of a silver lining of being trapped at home while this is happening at the same time, is that it’s maybe forcing a little more reflection than we would ordinarily have if we were living our lives in a more ‘normal’ way,” Bomback told Variety senior editor Michael Schneider, who was moderating the 10-person panel. “There are ideas that I thought I’d be working on that just seemed completely irrelevant right now. It’s been a challenge to find ideas that feel like they really speak to where we’re at. Not because you want to sort of capitalize on what people are interested in, but simply because what’s the point of writing something that doesn’t feel relevant to the way we live?”

The protests sparked by the killings of Black people by the police are also leading the entertainment industry at large to take a harder look at itself when it comes to inclusion.

Several writers on the panel weighed in on what next steps need to be taken, with “Watchmen” writer Cord Jefferson saying, “There’s no way that you can move without trying to center voices that have been left on the margins for a long time.”

“I think that your business sense should tell you that there’s millions of people out there who have not seen their stories told on television, or in film, or in whatever other medium we have, who are sort of desperate for something that speaks to them,” Jefferson continued. “Even if you don’t want to do the moral thing, I think you can speak to some of these executives and say that it’s the correct business decision to hire people of color as executives. It’s a correct business decision to hire queer people as showrunners and for straight white men who run shows to hire a diverse group of people to come into the room. It’s going to give you a better product in the long run.”

“Watchmen” tackled systemic racism in America head on with the opening sequence depicting the Tulsa race massacre of 1921.

Showrunner Damon Lindelof said that he only felt comfortable telling the show’s stories once he was able to “bring on a number of other storytellers.”

“I feel like it’s not revelatory for anyone in the year 2019 to say that race and policing are the number one problem in America. Maybe it just makes it a little bit more noise because a white guy said it. But people of color have been saying it for as long as I’ve been alive, and I’m just glad that we’re having these conversations in the context of our art right now, because they’re long overdue,” Lindelof said.

Joey Soloway, the “Transparent” showrunner who sent the series off with a musical finale earlier this year, agreed that the industry needs to capitalize on this moment in which people are “learning more about what it means to have white privilege.”

“It’s really important to take the exponentially fast way that we’re learning about how to be anti-racist and find ways to really incorporate it, not only into our storytelling, but our business practices,” Soloway said. “We’re at a place where patriarchy and white supremacy are on the table, everybody can see them…We’re living in ‘Idiocracy,’ and we look at who is making the culture, 96% of the creators are white men. For me to be still saying, ‘I want to have my voice out there,’ the only way I can really live with it is to make sure I’m adding to the voices of non-binary people.”

Another of the series represented on the panel which dealt heavily with race is “Little Fires Everywhere.” Writer Attica Locke said the series looked to explored how dangerous the concept of being “color-blind” can be.

Although the series and the book on which it is based are set in the ’90s, Locke said we can find the origins of today’s “Karens” in that time period.

“Looking at the racial issues of the show, (the ’90s) was a time where all of us, or some of us, felt like we’d done some s—. We could pat ourselves on the back. ‘Y’all are voting, y’all in the lunch counters, we good now, right?’ I actually think all of the ‘Karen’ that we’re seeing in 2020 has its roots in the ’90s, where everybody feels like they are above being racist, that their behavior is unchecked because they’ve decided that in their hearts they’re okay…I think it was a perfect time period to look at the casual dangers of white liberalism,” Locke said.

Showrunner Liz Tigelaar added that the series’ writers’ room featured plenty of conversations about how little progress there has been in the intervening 30 years when it comes to both race and abortion.

“We were told — at least I should say white people were told in the ’90s — not to see race. We talked a lot in the room about how obviously damaging and detrimental that concept is,” Tigelaar said. “With the right to choose, we looked at how in the ’90s, there was so much more freedom and an 18-year-old girl with access could go to an abortion clinic and get a safe abortion. We were able to look at how things have changed now.”

The subject of representation also came up when the conversation turned to “Barkskins.”

Ojibwe writer Migizi Pensoneau said that while he was “sort of dubious” about joining the series at first, he was won over by the fact that it was going to “showcase the diversity that already existed within an Indian country,” by bringing Wyandotte, Mohawk and Ojibwe consultants on board.

“In terms of representation, there just hasn’t been that nuance. Everybody sort of looks the same, you just throw some leather on them, some buckskin, throw some feathers and suddenly you got yourself an Indian, and as long as they look off into the distance and talk like a chief-y man, you’ve got yourself your Native representation,” Pensoneau said. “Usually they are the people that represent the woods and sort of the virgin culture of this new world. And what I responded to was that two of the leads in ‘Barkskins’ are Native people from two different nations who are not representative of even their tribes. They don’t have to be that, they’re not these proxies, these avatars for their people. They’re just people that live in this world, and that was really exciting to me, that I got to be a part of making a world like that.”

Showrunner Elwood Reid talked about bringing Pensoneau on board and how he helped expand on the source material of Annie Proulx’s original novel.

“I brought him into the writers’ room and it was eye-opening for me because just reading historical documents, history is written by the victors, mostly written by men. I had to just turn to Migizi and say, what do we do here, because there was no written record,” Reid explained. “How do we depict what really happened in North America when the Europeans came over….he educated and taught me a lot.”

The topic of how the entertainment industry deals with the police has been heavily discussed about over the last few weeks, and while “Unbelievable” showrunner Susannah Grant said that she never set out to make her series specifically about law enforcement, there are certainly moments when the series speak to the pervasiveness of domestic assault within the police force.

Grant also discussed how the MeToo movement only made the series feel more relevant, but had little effect on the timeless central issue it deals with.

“These are not new issues. Whenever we released this show it would have been relevant because violence against female bodies in our culture has been around as long as this country has been around,” Grant said. “When MeToo hit, it was a culmination, it was the cresting of a wave that we were all feeling. We actually went into Netflix and had a conversation about, ‘Does this change the storytelling at all?’ We said no. I don’t want to make a show that’s too reactive to the moment, to the specifics of the moment, because the issue transcends the moment.”

The panel featured many experienced showrunners with handfuls of big shows under their belts, but one newcomer to the TV sphere among them was Alex Garland, whose series “Devs” marks the “Ex Machina” director’s first work for the small screen.

Garland spoke about the differences he has found in making television and working with a network versus a major film studio.

“[FX] were very generous and gave me a very free hand. I think previously in my career, I’d often written something or made a movie and then delivered it, and at the moment of delivery there was a kind of dismaying moment of surprise for the distributor when they realized what they had,” Garland said. “I think it’s possibly because…I use tricks to make scripts reading more easily, and I think it probably implies a slightly more easy-going thing than the finished product. I think maybe by the time I got round to work on TV, they kind of knew, ‘Oh, it’s probably going to end up something like this.'”