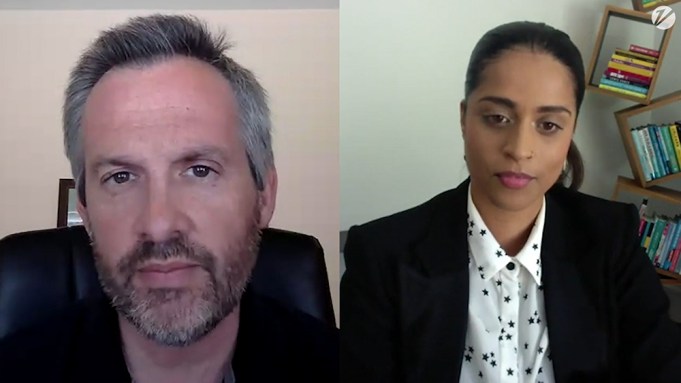 As a highly successful YouTuber, Lilly Singh is used to doing shows from her living room and improvising sketch concepts from home.

Singh wrapped the first season of her NBC late-night show “A Little Late with Lilly Singh” (which was just renewed for a second season) in December, after a furious schedule of shooting 96 episodes in three months. The irony is that now, with the coronavirus shutting down in-studio production across late-night, all the other hosts are being forced to do what she has already mastered.

Interview with Singh above available in audio format here:

The decision to shoot at such a pace had its pros and cons, and was born out her Superwoman-esque desire to juggle two highly-stressful careers, explained Singh during her virtual keynote conversation for the NAB Show Executive Leadership Summit, produced in partnership with the Variety Streaming Room.

“When I tell people about that schedule…in their face, they’re smiling, but their eyes are saying, ‘You’re a crazy person,” Singh said. “It’s great, because it allows me to fulfill some of my other ambitions. It allows you to have a tight-knit crew and production, where everyone is committed for a certain amount of time.”

However, going into Season 2, she sees plenty of room for change, which seems pretty normal for a freshman late-night show. After all, is there any host out there who can claim, hand on heart, that their show was running at full steam after only one season?

“If I’m being honest, when I first started, I thought, ‘I’m going to be involved in every single script and every monologue. I’m going to review every single episode.’ There was a lot I wanted to do, and I managed to do a lot of it, admittedly at the cost of sleep and a little bit of sanity, because I did review almost every single episode, which is not typical, I think, of most hosts,” Singh said. “It took me a little bit of time to let go of some of that control, but I think that’s what comes with the learning process and learning how to delegate, learning that these people are experts at what they do. I’m definitely going to try and delegate more in season two, but I still think, by nature, I’m a pretty hands-on person. My name is in the show title. It’s my point of view that I’m sharing, which I believe is an extremely valuable and unique point of view in the late-night space.”

Whereas the Stephen Colberts and the Jimmy Kimmels of the world typically can’t wait to sink their teeth into President Trump’s latest gaffe, Singh is one of several hosts who chooses to stay mostly clear of politics.

Her motivations for doing so are partly fueled by her nationality (as a Canadian citizen she cannot vote in the country she lives in), and partly due to the abundance of hosts who already lean on political satire.

“There are issues I’m very passionate about and that I’m very vocal about, whether it’s gender equity, whether it’s about legislation regarding women’s bodies, whether it’s about education….and I will continue to talk about through comedy, because I think comedy is a great vehicle for doing that,” Singh said. “There’s lots of places you can go to get informed and hear jokes about politics. I feel like less and less, there are places where you can go where you are not reminded of that. So I want to find balance.”

With her first season as a host almost in the rear-view mirror, Singh said she been reflecting at length on the experience, and how the intense media focus on all her “hyphenates” (being the first female, bisexual women of Indian descent to helm a late-night show) affected her as a host.

“I really, truly do believe representation matters, and I think when you see an episode with me and Mindy Kaling and we’re making references about things from our upbringing that are so unique to our culture, that’s beautiful and awesome,” Singh began. “But, at the same time, I don’t want to be defined as that. If I’m being honest, I’m stuck in a little bit of a loop where I don’t quite know how to handle it, because when I’m doing a monologue and I’m talking about my experience, on one hand, I feel like I’m so much more than all these hyphenates. But, on the other hand, my point of view is so influenced by those hyphenates. So it’s kind of this weird pattern of being defined by it and not being defined by it … My solution is to truly just be myself. Everything is from my point of view, and my point of view happens to be those hyphenates.”

Going into the gig, Singh’s biggest concern was that she would be “encouraged to be someone else or fit a mold.” And while she generally found that wasn’t the case, Singh said she wants to continue exploring new ways in which to break free from late-night conventions, one of those being her guest selection in season 2.

Singh pointed to Pakistani activist and Nobel Prize winner Malala Yousafzai as one of her favorite guests from season 1 and the kind of person she would like see more often on the show, because she was able to “dive deep into her work” and tell stories that were perhaps a little less polished than regular late-night fare.

“I just want to have really good conversations with people. I mean, in some instances, yes, it’s great to have a shiny celebrity, but in other instances, I think there’s so much power and value and just amazingness in having people who just have a story. I don’t really care about their celebrity profile. I just want good conversation and good stories,” Singh said.