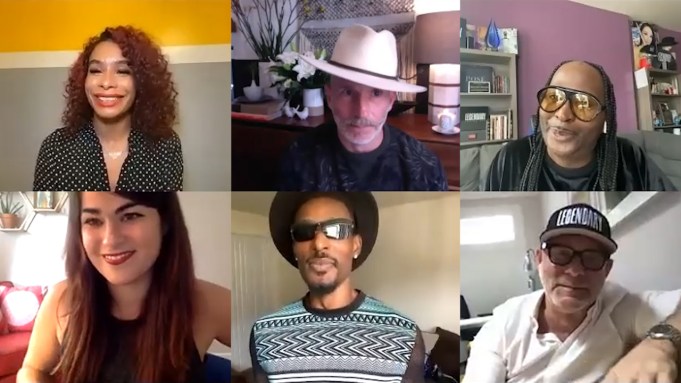 When HBO Max launched on May 27, the television world was introduced to a competition series unlike any seen before on screen. Inspired by the culture of ballroom, “Legendary” follows eight houses as they vogue their way through nine balls to win a cash prize of $100,000. And while it may look like a dance competition show on the surface, under all the glitz and glam is a series that takes viewers through the history of the dance art form and its continued importance to the LGBTQ+ community.

Maldonado, who serves as a judge alongside Megan Thee Stallion, Jameela Jamil and Law Roach, shared one of the reasons that made making the series so special is the way the show highlights the contestant’s personal journey to ballroom.

“I think the most important thing about the show or how the show has portrayed ballroom and has brought it into the spotlight is the fact that you get to see the actual stories,” she said. “You get to hear why these people were inspired to be a part of these houses, why this is so important to each individual, what it takes to even have the courage to get out there and have the confidence to even compete.”

The Afro-Puerto Rican dancer, known as the Wonder Woman of Vogue, went on to add that for many in the competition the houses they have become a part of are sometimes all they have.

“That alone is something that’s beautiful,” said Maldonado. “Some of us, some of the people in our own community, they don’t have that. They don’t have a family. They don’t have somebody that they can call for support or for acceptance or for anything. And this show shows that, and that’s the most important thing about ballroom.”

Beyond the competition, the executive producers agreed that in order to bring ballroom culture to the screen it was necessary that viewers heard the stories behind the dances.

“It was incredibly important for Jack, myself, David, that you went much further than just the competition of it all,” said Eric. That you actually got to know who was behind the competition.”

“We’re always looking to tell important stories and interesting stories,” added Collins. “And this is a world that I had never seen. And I had such a visceral, emotional connection to it.”

It was important for all involved to not only bring ballroom culture to TV, but make sure it was done accurately, from the lingo they used to the categories they chose for the competition.

Aside from showing viewers the process of what goes into making each ball theme come to life, Mizrahi added that the show also shares a lot of history behind the art form with the audience and allows the contestants to bond with their families in a new way.

Added Wesley, “You come up with so many ideas, but you want to make sure you have everything right on the nose, because we’ve been going through quite some time of many people stepping foot in our culture and not giving us the full respect and us not getting the full celebration back for us.”

The panelists also addressed why they chose Jamil and Megan Thee Stallion to be a part of the judges panel despite them not having any background in ballroom culture.

“You don’t come into this world knowing everything,” said Maldonado. “So the fact that we see the judges being educated throughout the episodes and not just them coming in like, ‘Oh yeah, I know everything.’ I feel like that’s better…People are seeing them learn. And that gives inspiration to people who don’t know.”

Bringing the culture to the forefront in a way that did it justice and was accurate was one of the main priorities, and for Eric, “Legendary” did just that.

“To be able to see and to be in rooms with artists and designers who came out of this world, years later to try to put it on television in a way that felt authentic, that felt like the same sort of passion that I had for it in the ’90s and in the early 2000s,” he said. “To see it come to life, the way that it has, and to be with people like Jack and Leiomy and Dashaun, it was life changing for me because I thought I’d never be able to replicate this feeling again.”

Watch the full discussion below.