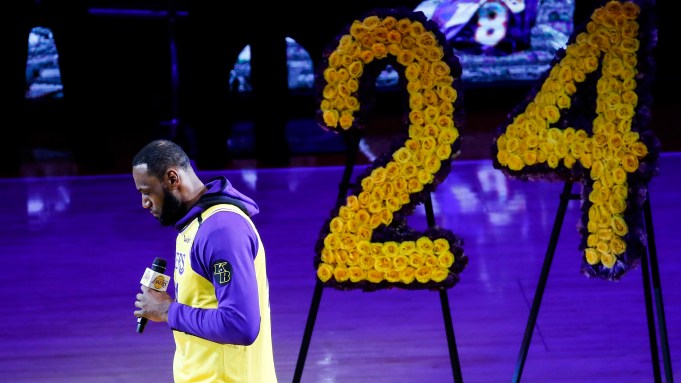 It was a surreal and heartbreaking scene at Staples Center as the Lakers hosted their first NBA game following Kobe Bryant’s death.

During an emotional pre-game ceremony, which featured performances by Usher and Boyz II Men, and a rousing speech from star LeBron James, the organization saluted one of the league’s all-time greats in Bryant, who, along with his daughter, Gianna, and seven others, was tragically killed in a helicopter crash Sunday morning.

“We’re all hurt and heartbroken,” James said, fighting back tears.

Standing next to two lofty bouquets of purple and gold flowers, shaped in Kobe’s numbers, 8 and 24, James told the sold-out crowd that Friday night wasn’t Bryant’s memorial – that would happen soon – but a “celebration” of the basketball icon, otherwise known as “The Black Mamba.”

James began by reading the names of all of the victims in Sunday’s tragedy: Kobe, his daughter Gianna (“Gigi”), John Altobelli, Keri Altobelli and Alyssa Altobelli, Christina Mauser, Sarah Chester and Peyton Chester and Ara Zobayan.

Earlier, the 20,000 or so passionate fans in attendance chanted “Kobe! Kobe!” followed by “Gigi! Gigi!” for Bryant’s 13-old daughter.

Gigi’s basketball teammates sat courtside for the game, dressed in black jumpsuits. The Lakers, who held a 24.2 second moment of silence, also saved seats for Kobe and Gigi, their courtside chairs adorned with jerseys and a bouquet of red roses.

Boyz II Men, who performed a Kobe tribute along with Alicia Keys at Sunday’s Grammys, harmonized the Star-Spangled Banner.

Later, at halftime, Wiz Khalifa and Charlie Puth, would pair up for a touching rendition of “See You Again.”

At the heart of Friday’s ceremony was a gut-wrenching video assembled by the Lakers. Narrated by Bryant, himself, and featuring the beautiful music of cellist Ben Wong, the six-minute tribute captured Kobe’s basketball legacy, in his own words, while also championing his off-court success as an Oscar-winner, husband and father of four daughters.