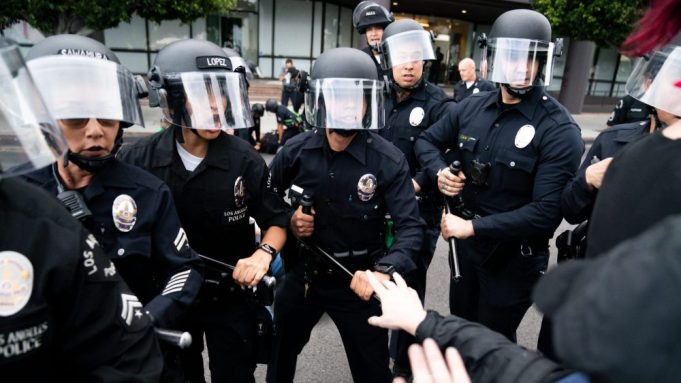 Hackman Capital Partners, the owners of Television City, have commented on the LAPD’s use of the studio complex during the large-scale protests in Los Angeles on Saturday.

“As we fight a global pandemic, we are reminded of the deep wounds in our country that must be addressed and healed,” Hackman Capital said in a statement to Variety. “During this challenging and unprecedented time, we stand in solidarity with those speaking out against systemic racism, violence, and injustice and are committed to supporting our neighbors and the community at large. Television City Studios has a long history of making its facility available to the community in both good and difficult times. In connection with Saturday’s Pan Pacific Park demonstration stemming from the tragic homicide of George Floyd in Minneapolis, and as part of its cooperation with the City of Los Angeles, the studio provided access to first responders, including the LAFD and LAPD, to ensure public safety.”

The LAPD did not immediately respond to Variety‘s request for comment.

People expressed outrage at CBS, the former owners of Television City, after they saw the LAPD using the facility as a staging area during the protests. However, CBS sold Television City to Hackman in December 2018. The company still uses some sound stages and office space at the facility, but has had no role in the operations since the sale closed.

The past week has seen intense clashes between police and protesters across the country over the death of George Floyd in Minneapolis on May 25. Floyd died after police officer Derek Chauvin pressed his knee into Floyd’s neck for nearly nine minutes. The results of an independent autopsy released on Monday found that Floyd died by asphyxiation, contradicting the initial findings of the Hennepin County Medical Examiner.