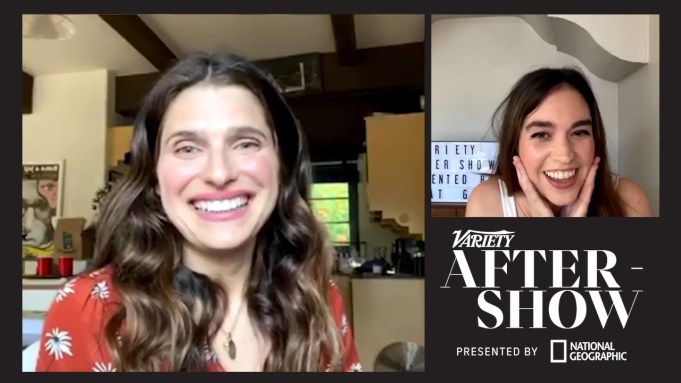 (SPOILER ALERT: Do not read on if you haven’t watched the Season 2 finale of “Bless This Mess.”)

Lake Bell’s ABC sitcom “Bless This Mess” just aired its second season finale, but the actor is celebrating something else: Her son Ozgood’s triumphs in potty training.

During Bell’s interview with Variety, the 3-year-old ran into the frame, excited to tell his mother about his news. “I’m so proud of you!” Bell said before turning to the camera and mouthing an apology. “This is a quarantine interview.”

A native New Yorker, Bell took inspiration from her own life, as well as her marriage to tattoo artist Scott Campbell, to create the series.

“I’m from Manhattan and my husband is from Texas and Louisiana. He knows how to live off the land and he’ll go on a hike and find critters and talk to them. He’s very capable and I am a Manhattanite. I’m a prepper and I can organize a pantry. There’s a difference in our uses out in the brush, if you will,” she said.

That reverse “Beverly Hillbillies” dynamic is portrayed on screen through Bell’s character, Rio, and her husband Mike (played by Dax Shepard) as they navigate uncharted rural territory, much to the amusement of their new neighbors.

The ethos of the show is the importance of community, which is especially apt during a global pandemic. Rio and Mike rely on the town in a way not possible in New York City. “In a lot of smaller towns, you have your community come in and aid, and perhaps in a more urban community you tend to keep to yourself. You operate for your community and you pick each other up in times of darkness.”

Rio and Mike will end up relying on their community quite a lot if the show is picked up for a third season. At the end of the two-part finale, it’s revealed that Rio is pregnant. Despite the couple’s desire to keep the pregnancy a secret, the news spreads throughout the small town like wildfire and leaves viewers with endless future storylines.

“It submerges us right back in that pocket of feeling kind of fish out of water. Like here’s Mike and Rio who are kind of fumbling and bumbling, trying to get through their daily lives and trying to just do things that other people are very capable of doing,” Bell said before explaining what the pair becoming parents in Bucksnort means culturally and politically.

“We do wrestle and play with some blue-state, red-state politics and ultimately if anybody looks like a bunch of turkeys, it’s us. We poke fun at ourselves all the time and ultimately the show is about differences, but despite those differences, we’re all human and feel empathy and love for each other. The theme of community is deep-seated in the show,” said Bell.