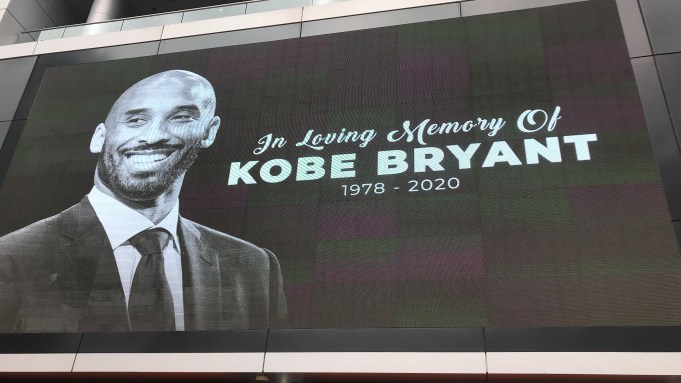 Within hours of the news of Kobe Bryant’s death breaking, a fast-growing crowd of about two hundred people had gathered outside of the Staples Center in Los Angeles on Sunday to mourn the Lakers legend, who died earlier that day in a helicopter crash.

Chants of “Kobe! Kobe!” broke out spontaneously outside of the sports venue, home court to the Los Angeles Lakers. A black-and-white photo of Bryant populated screens featuring the message “In Loving Memory of Kobe Bryant, 1978-2020,” which was displayed outside the Staples Center and Microsoft Theater, where the Grammys were under way Sunday night.

Soon after, mourners chanted and clapped “Thank you, Kobe” to commemorate the NBA’s fourth all-time highest scorer and basketball icon. Many people could be seen on their way to the Staples Center in Lakers and Bryant jerseys, many carrying flowers to the venue. Several of the people in attendance were weeping. Not far away from the Staples Center, people had already begun leaving flowers and candles at a mural depicting Bryant.

Later that evening, during the Grammys ceremony, fans continued to gather outside of the Microsoft Theater. Richard Carranza, waving a Lakers flag, had made the drive from Santa Fe Springs to remember Bryant. He got emotional while recounting what the NBA star meant to him.

Dee Armenta, a 25-year-old Orange County native who showed up to the arena wearing a Bryant jersey, said that she has been a fan since she was 8 years old. As someone who played basketball growing up, she said she would “literally mimic his shooting form” and the faces he would make while playing.

“When he retired especially, it was like a bittersweet feeling,” said Armenta. “And now, it’s just very heartbreaking so I figured I’d come here to pay my respects.”

For those in Southern California who grew up watching Bryant and the Lakers, the loss was immensely personal.

“It feels good to be around the other fans, sharing memories and hearing what everyone else has to say and remember about him,” she added.

At a news conference Sunday afternoon, Los Angeles County Sheriff Alex Villanueva said that nine people were on board the helicopter, including Bryant and his 13-year-old daughter Gianna. The identities of the other passengers have not yet been released. There were no survivors.

Bryant was traveling via private helicopter when it crashed in Calabasas, a suburb of Los Angeles; it was said to be en route to her basketball game in Thousand Oaks.

In addition to the makeshift memorial downtown at the Staples Center, fans have also gathered in Calabasas, per local televised news coverage, as well as outside of a Kobe Bryant mural at Shoe Palace on Melrose, according to Los Angeles Times reporter Brittny Mejia.

People are snapping pictures and leaving candles, flowers and Nike shoes in front of a #KobeBryant mural outside of Shoe Palace on Melrose pic.twitter.com/k0gdnHh9G0

His death sent shock waves locally and nationally, prompting an outpouring of remembrances from Southern California and beyond. Disney CEO Bob Iger, fellow basketball icon Kareem Abdul-Jabbar and Ellen DeGeneres were among those to publicly share their condolences.

“Kobe was a legend on the court and just getting started in what would have been just as meaningful a second act,” wrote former President Barack Obama on Twitter. “To lose Gianna is even more heartbreaking to us as parents. Michelle and I send love and prayers to Vanessa and the entire Bryant family on an unthinkable day.”