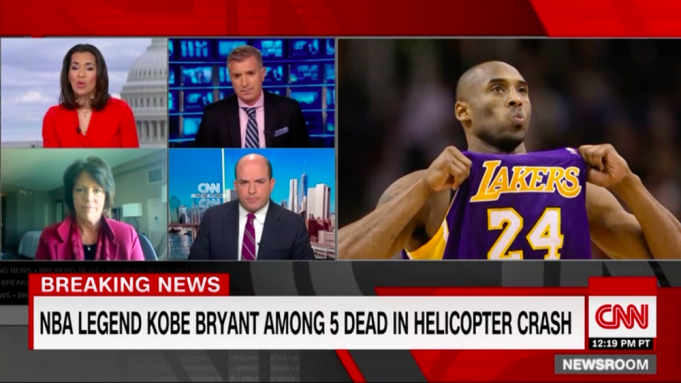 Kobe Bryant’s shocking death forced major TV news and sports outlets to scramble on Sunday to cover the helicopter crash in Southern California that took the life of the legendary 41-year-old basketball star,  his 13-year-old daughter, Gianna, and seven others.

From the BBC to Fox News, Bryant’s death dominated coverage as soon as word surfaced via TMZ around 11:50 a.m. PT. The news broke as ESPN was in the midst of its NFL Pro Bowl telecast. The sports powerhouse broke into coverage for the somber bulletin around 12 p.m. PT but then returned to the game. ESPN 2 scrapped its regular schedule to present news about the crash and tributes to the famed Los Angeles Laker who retired after 20 seasons in the NBA in 2016.

Bryant’s young age meant that networks had little in the way of retrospective material prepared to help put his life and career in perspective.

“Kobe Bryant was a transcendent figure in this league and as popular a player as we’ve had since Michael Jordan,” said Adrian Wojnarowski, ESPN’s senior NBA insider, told ESPN 2. ESPN said via Twitter that it will carry a “continuous” telecast of “SportsCenter” and “NBA Countdown” following its coverage of today’s Boston Celtics-New Orleans Penguins NBA game.

Bryant’s death came just hours before the music industry gathers in downtown Los Angeles for the annual Grammy Awards at the Staples Center, the home of the Lakers. The area around the arena was full of impromptu tributes to Bryant including his image on giant LED screens around the L.A. Live. All of that virtually insures that tonight’s live telecast on CBS will include at least a moment of tribute to the Laker legend. The non televised portion of the Grammy ceremony opened with a moment of silence for Bryant.

The Denver Nuggets NBA team held a moment of silence during its regularly scheduled Sunday afternoon game against the Houston Rockets.

Bryant’s history as a player and the criticism he faced at times from colleagues for his style of play was analyzed and debated among commentators. He was accused of sexual assault in a 2003 case that has been widely highlighted as an example of a powerful figure being protected by wealth and fame. He pleaded not guilty and the charges were eventually dropped. After settling a civil suit related to the incident, Bryant went on to new heights as an athlete and public figure.

On Sunday, analysts agreed that his eye-popping skills on the court stood out more than anything. Commentators noted the eerie timing of Bryant’s death, coming less than 24 hours after current Laker star LeBron James passed his predecessor on the list of the NBA’s all-time points leaders, at No. 3.

“Kobe had a magnetic personality for someone who came right out of high school to NBA superstardom,” NBC Sports analyst Mike Tirico told MSNBC.

After his retirement, Bryant leaned in to TV, films, documentaries, books and other media in a way that kept him relevant in sports and pop culture overall. He was part of the team that won an Academy Award in 2018 for animated short film for “Dear Basketball,” based on the letter he wrote in 2015 announcing his retirement from the league. The short also won a Sports Emmy Award. And Bryant himself was sought after for endorsement deals.

“Young players everywhere in the world emulated him,” Wojnarowski said. “His ability to sell sneakers and to market products — he started to transcend basketball in his post-playing career.”

CNN and other news outlets also focused on piecing together the details of the helicopter crash in the foggy hills over Calabasas, Calif. Gianna Bryant was the second-oldest of the four daughters Bryant had with his wife of nearly 20 years, Vanessa Bryant. Four hours, initial reports indicated that five people died in the crash, but L.A. County Sheriff’s Department officials confirmed that nine victims, including the pilot, and the fact that Bryant was the owner of the helicopter.

In Los Angeles, it took some time for local stations to break into regularly scheduled programming, but eventually KCBS, KNBC, KABC, KTLA, KCAL and KTTV all went to live, commercial-free local news coverage. That meant KABC pre-empted ABC coverage of the Pro Bowl, while KNBC shelved NBC’s telecast of U.S. Figure Skating championships, and KCBS broke into coverage of PGA Golf. Fox-owned KTTV moved the network’s broadcast of a college basketball game between Michigan State and Minnesota to its sister station KCOP. A KABC reporter noted that its station’s helicopter had been grounded the night before due to heavy fog cover in the area.

CNN put the Trump impeachment trial and China’s coronavirus outbreak on pause for wall-to-wall Bryant coverage in the hours after his death. Leaders of Lower Merion High School in Ardmore, Pa., where Bryant emerged as a budding superstar in the 1990s prior to joining the NBA, gave an impromptu press conference Sunday that was carried live by CNN and other outlets.

Fox News said it would stick with plans for a 7 p.m. ET town hall event with Democratic presidential hopeful Pete Buttigieg but would return to live coverage from Los Angeles in the 9 p.m. ET hour.

In one of Bryant’s final interviews, he spoke with great enthusiasm and fatherly pride to the Showtime podcast “All the Smoke” earlier this month about Gianna’s interest in basketball, which led him to begin coaching her team. “It’s fun,” he said.

Bryant noted that he recently took her to a Laker game that was his first time in the team’s home arena since his jersey retirement ceremony in December 2017. “For the first time I was seeing the game through her eyes,” he told hosts Matt Barnes and Stephen Jackson, also former NBA players. “She was having such a good time.”

Bryant also spoke of his post-NBA emphasis on business and developing media properties through his Granity Studios banner. He observed that producing media and basketball require similar skills and focus on fine details

“In business and creativity, there is no ‘off’ switch. Your brain is constantly working,” he said. But in contrast to his work on the court, “the difference is I don’t have to put my body through hell every day,” Bryant said.

Bryant and Granity Studios worked closely with executives at Showtime on the 2015 documentary project “Kobe Bryant’s Muse,” and he was featured in the cabler’s 2019 docu  “Quiet Storm: The Ron Artest Story.”

“We mourn the loss of a giant and celebrate his legacy,” Showtime said in a statement. “Our thoughts are with Kobe’s family, friends and millions of fans around the world, along with all of those affected by today’s tragic event. We were honored to tell his story.”

Michael Schneider and Brian Steinberg contributed to this report.