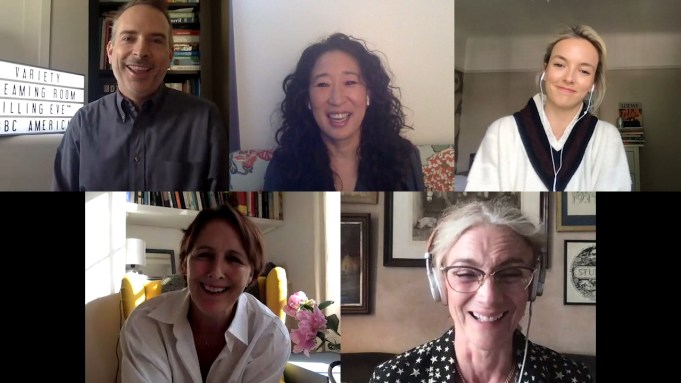 The Season 3 finale of “Killing Eve” brought to a close another game of cat-and-mouse between MI6 agent Eve Polastri (Sandra Oh) and the psychopathic assassin Villanelle (Jodie Comer). Both Oh and Comer, along with their co-star Fiona Shaw and series executive producer Sally Woodward Gentle, took part in a conversation with Variety senior editor Michael Schneider in the Variety Streaming Room to rewatch sequences from the show’s newest season and discuss how they have worked with their creative team to to continue discovering new sides to these characters and what may be in store for them in the future.

“I feel at the end of this [season], Eve and Villanelle are closer,” Oh said. “But not in the way that I think people would expect… When they come to the end of the series, I just feel like the way that [the two] know each other and, in some ways, depend or trust each other, [reflects] a sense of trust that is outside of anyone else. At least from Eve’s perspective.”

The interplay between Eve and Villanelle is the series’ bread-and-butter, with their mutual fascination for one another threading a tension across the series that feeds into its macabre sense of glee, even when the two of them spend extended time apart from one another.

Gentle spoke to the challenges of keeping Eve and Villanelle’s dynamic fresh over the duration of the series’ twenty-four episodes.

“What [we] got going for [us] is two extraordinary actors that just crackle with energy whether they’re together or apart,” Gentle said. “Both characters have awoken something else in each other, so that’s constantly there. You feel that it’s going on even when they’re not together, and then you’ve got no idea really what’s going to happen when they do come together… I think the most important thing for us is that it’s got to be different each time. Their relationship is moving on. Their understanding of what the other has given them has got to keep shifting. And sometimes they are deluded about what that is.“

One such way “Killing Eve” added shades to Villanelle this season was through a detour to Romania, where the assassin reconnected with her mother and other relatives. Comer touched on how the storyline introduced a new angle on Villanelle’s perspective, examining how such a vicious and frequently misanthropic character would behave when directly confronted with her personal history.

“I think the script actually changed a lot throughout the process because there’s such a fine balance of exploring the past. We never wanted to kind of give reasoning as to why she is the way that she is,” Comer said. “We’re not excusing her, but I think it was really important to explore it… I think the thing I’ve learned with Villanelle is the more we put her in situations where she’s not comfortable… [that’s] actually where we find more truth.”

Shrewd pacing is the key to “Killing Eve” though, as nobody wants to crack these characters entirely and ruin the fun and make things unpredictable.

“I’m sad if we lose too much of the mystery of Villanelle and Eve,” said Fiona Shaw, who plays MI6 boss Carolyn. “We didn’t plan [these characters] in advance. We sort of start from them. They’re amazing what they do. It’s great fun to explore them. But I don’t ever want to solve them…There’s a bit more to go. But certainly this year was the first year we were they kind of chipped behind the walls of [their] minds.”