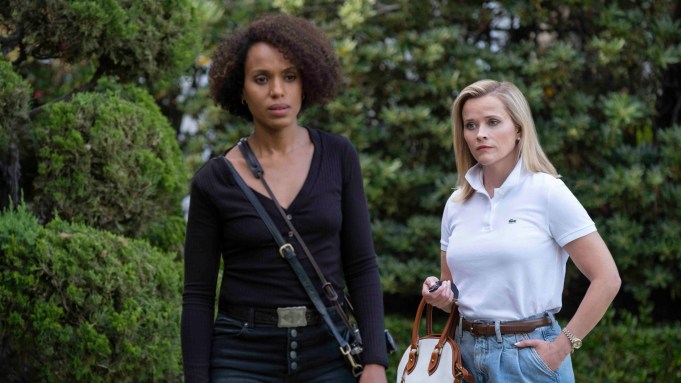 Almost immediately after Reese Witherspoon optioned author Celeste Ng’s bestseller “Little Fires Everywhere” to produce an on-screen adaptation, the question became, who would play Mia Warren to her Elena Richardson, the two mothers at the center of the story.

But for the Oscar winner, the answer came easily, and she turned to friend Kerry Washington for the role.

“Who wouldn’t want to partner with Reese Witherspoon?” Washington told Variety at the junket for the Hulu limited series, nodding to her co-star and co-executive producer.

“Or Kerry Washington?” Witherspoon chimed in. “Washington and Witherspoon — it’s like our own version of an action movie.”

And there’s plenty of action in store as two of Hollywood’s most powerful actors-turned-producers team up for the high-profile series, the first three episodes of which are already streaming. The story follows Elena Richardson as she rents to the mysterious Mia Warren and her daughter Pearl. When a dramatic event rocks their small town of Shaker Heights, the two women find themselves at odds as the community is forced to come to terms with their own social biases.

“When I read the book, I just thought it was a beautiful exploration about different kinds of mothering,” Witherspoon explained. “And I thought nobody would be a better scene partner or partner at behind the scenes actually, truthfully, than Kerry. She’s known as such an incredibly professional person, but she’s also a lot of fun.”

In a story that already dissects the complexities of womanhood and motherhood, class systems and racial identity, casting Washington and 16-year-old Lexi Underwood as single mother Mia and her daughter Pearl, respectively, added a visual representation to the already nuanced conversation.

“We knew that the novel was so much about identity and how identity impacts relationships, how you think about yourself, your sexuality, your class, your geography, how those things impact how you parent, how you make friends, how you work in the world. So, I think adding a layer to that complexity with race is really powerful,” Washington said. “It is interesting though because a lot of people when they read the book put race onto Mia — like people decided what race she was — even though Celeste has been really clear that she did not have a race in the book. So, that’s also been interesting to kind of see people’s reactions to me in the role. I know they feel like it affirms their idea, or complicates their idea, or is in opposition to their idea of who she is supposed to be.”

“Did you guys talk about it when you were considering calling me for the role?” Washington asked Witherspoon.

“You know, we just were like, ‘Kerry would be great,’” Witherspoon answered. “Talking about potential partners, you were always somebody that I dreamed of working with and then we spent so much time together [the two actors are also heavily involved members of Times Up] that I was like — I just really valued your opinions in this space. And I thought to deepen the project and really make it about so many different things, I really valued you as a partner.”

Of working with the powerhouse pair, Joshua Jackson (who plays Witherspoon’s husband Bill Richardson) said, “Having Reese and Kerry talk about the intersection of race and power and privilege in this moment is incredibly interesting and they are captivating.”

“You add on top of that this layer of the entire power structure of the show being all female, all women [including Washington, Witherspoon and showrunner Liz Tigelaar at the top of the pyramid],” Jackson continued. “I thought that was an interesting take on it too because it’s important to have different perspectives telling stories.”

And as much of a conversation-starter as the book has been since its 2017 release, Washington and Witherspoon are hopeful for the same reaction to their version.

“Every episode, it’s ambiguous,” Witherspoon said, hoping that audiences react to the characters and their choices in real time. “You check your biases and then you also identify with certain people and then the next episode you’re like, ‘Wait, no.’ So we wanted to deliberately always switch points of view.”

“We just want people watching and talking,” Washington added. “Not with any particular agenda, but just watching and talking because these characters are kind of diving into the complexity of their lives and we want other people to be open to thinking about that for themselves.”