Kerry Washington, Pilar Savone on How Pandemic and Protests Are Changing Content 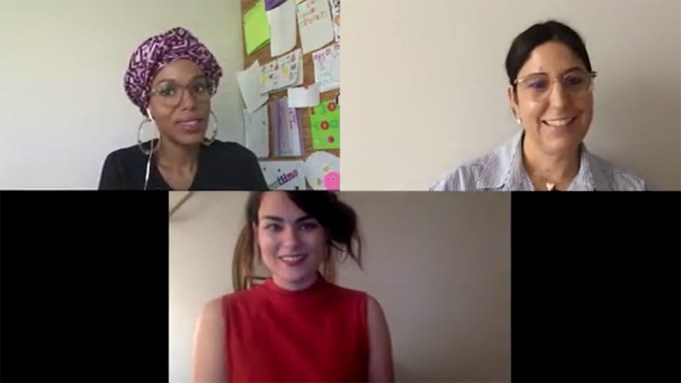 Savone had been working for some time with Tarantino, and Washington had been learning from “amazing numbers ones” on the call sheet like Jamie Foxx, but together, they decided to form Simpson Street to start producing their own work, telling the kinds of stories they had always wanted to tell.

The pair came together for a keynote conversation at Variety Virtual TV Fest, explaining precisely what the Simpson Street mission statement is and what particular projects they are attracted to.

“Our focus is really about understanding and celebrating the idea that heroes can look like all of us,” Washington told moderator and Variety Chief Television Critic Caroline Framke. “In order to really firm that, we are focused on centering otherness and even that idea of like what is other depends on who you are. But this idea of shifting your idea of who is the protagonists and who’s to post what stories, need to be told whose stories deserve to be told.”

Some of the projects Simpson Street has produced so far include the 2016 HBO movie “Confirmation,” in which Washington plays iconic lawyer and academic Anita Hill, and more recently the Netflix drama “American Son.”

Washington said Simpson Street boarded both projects because they “felt like stories that had never been told before, that deserved to be in the narrative landscape.”

In terms of why “American Son,” which is based on the Broadway play, ended up at Netflix, Savone said the idea was to broadcast the film and its message to as large an audience as possible.

“We all felt like Broadway and theater is inaccessible to many people and we wanted the opportunity for more people to see ‘American Son’ and obviously with Netflix, with a global audience, they seemed to be the right home,” Savone said. “Once we met with them, the creatives there just got it. They were super collaborative with us, they were amazing partners. We had a very small window to shoot, we had five days actually to shoot it, and they were super helpful. They got into the weeds with us to figure out how we could do this, how we could make it look great and get it done.”

In the series, Washington and Reese Witherspoon play two mothers on very different ends of the socio-economic scale, and the stories of their two families become more and more intertwined.

“We haven’t told a ton of story about what it feels like to be a mom, what it looks like,” Washington said. “It feels like a radical thing to put moms at the center of a story, to have two female leads, but it’s storytelling in places where stories haven’t been told.”

Later on, the conversation turned to inclusion in the entertainment industry, particularly at production companies and in below-the-line spaces.

Washington weighed in saying that the “courage to make room for alternative additional inclusive voices is really important.”

“Diversity is not enough. Having one woman in the room means that woman gets tokenized and isn’t really empowered to use her voice right. Having two women in the room becomes a competitive situation. Having three women in the room means that these women can actually all speak their truth and advocate for women, but not feel like they have to be the monolithic face of the race for all women. I think the same is true in any marginalized group,” she said. “It’s really important to have different perspectives in the room, but to also have a multitude of different perspectives in the room, several white, women several black women, to really allow space for honesty and fluidity and thought.”

Savone also discussed how coronavirus pandemic and the wave of Black Lives Matter protests taking place across the country are affecting her and Washington’s creative decisions at Simpson Street.

“Even prior to the Black Lives Matter movement, even just being in COVID has changed the way that we’ve looked at things. Being forced into your home in the middle of March and realizing the world is changing, even when you’re reading things, you’re like that’s not resonating with me anymore or is that a story that we want to tell? We have absolutely gone back and looked at a couple of our projects and said, ‘We have to push ourselves here, we have a responsibility to make really great content and to say something, and right now it’s not saying something, so we have to figure out what it is that we can say.’ It’s absolutely had an impact on us in in more ways than one,” Savone said.