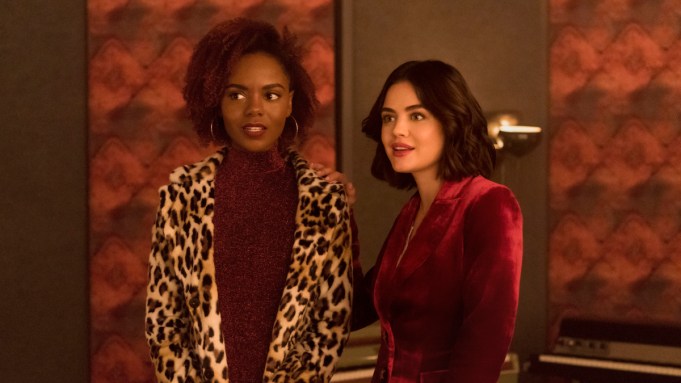 The first two series in television’s Archie Comics’ inspired “Archieverse” — “Riverdale” and “Chilling Adventures of Sabrina” — are dark and mature in tone. They may center on high school-aged, small town kids and their parental figures, but thematically they explore everything from sex and drugs to cults, murder and the literal occult. The upcoming third series in that universe, “Katy Keene,” is the opposite.

Set five years after “Riverdale,” “Katy Keene” follows 20-something adult characters as they try to juggle love, friendship and following their dreams in the metropolitan setting of New York City — but their New York is one that favors the bright eyes of aspirations, rather than the dirt and grit of the struggle. The titular character (played by Lucy Hale) is pursuing becoming a fashion designer while working in a department store to make ends meet, Meanwhile Josie (Ashleigh Murray) moves to New York from the titular town and previous series of “Riverdale” to try to make it as a singer-songwriter; Jorge (Jonny Beauchamp) is an up-and-coming actor who also performs in drag under the name Ginger; and K.O. Kelly (Zane Holtz), Katy’s boyfriend, is a boxer with his sights set on getting in the ring at Madison Square Garden.

Thematically, the show is designed to be a “big city fairytale,” he continues. “We set ‘Katy Keene’ in what we like to call ‘the New York of the imagination’ — in that it’s the real New York, but it’s the New York that’s vanishing before our very eyes. It’s a New York where artists can live in Manhattan and pursue their dreams and afford an apartment in Washington Heights; it’s a New York where places like CBGB still exist; and it’s also a place where the city is ripe with opportunity, whether that’s a career opportunity or a romantic opportunity.”

When Grassi and executive producer Roberto Aguirre-Sacasa were talking about expanding the “Archieverse” into a third show, they specifically wanted to “do something that had some of the same hallmarks as the other shows but was really, really different,” Aguirre-Sacasa says.

While “Riverdale” wades in the crime, noir and pulp waters and “Sabrina” dives into the deep end of horror, they wanted “Katy Keene” to have “comedic elements; it was going to be romantic, and it was going to be a true musical,” he continues.

Aguirre-Sacasa successfully launched the first series in the Archieverse, “Riverdale,” on the CW in 2017. The second series, “Chilling Adventures of Sabrina,” was originally set up as a pilot order at the same broadcast network before receiving a two-season order from streamer Netflix. Then-CW president (now CW chairman) Mark Pedowitz told Aguirre-Sacasa to “go with god,” he previously told Variety, because they couldn’t make such a commitment right out of the gate. But, he noted “we are always open when Roberto comes in and talks about other ‘Archie’ characters,” and thus, after going through the traditional pilot season process, “Katy Keene” landed with a series order on the CW.

Where these series live does not define their tone as much as the characters do. Back when he was creating “Riverdale,” Aguirre-Sacasa purposely wanted to twist the iconic, nostalgic characters of Archie Andrews, Jughead Jones, Betty Cooper, Veronica Lodge and the rest of the Riverdale High School gang into a more modern sensibility. When it came to “Sabrina,” it was a matter of leaning further into her witchcraft roots to explore the lore and tradition that surrounds such abilities. For “Katy Keene,” it was all about the world of fashion.

“In the original comics Katy Keene was many things: she was a model, she was an actress, she was an ‘it’ girl,” Aguirre-Sacasa says. “Over the years she’s done many things, but fashion has always been so key to her identity. In fact, it used to be that with the ‘Katy Keene’ comics fans could draw designs and send them in, and the ‘Katy Keene’ artists would draw them in. So we felt as long as we kept Katy in the fashion world in some way we were OK.”

Although for many comic book readers Katy Keene was a “fan favorite,” Aguirre-Sacasa notes, her image wasn’t plastered as far and wide as Archie’s has been. Hale admits she didn’t know much about her before the show and some viewers may not either. That means “a little bit of the pressure’s off because it kind of gave me a clean slate to do what I want. I look similar to her, so I think that helps,” she says.

One of Katy’s key friendships is with Josie, who becomes her roommate after she moves from Riverdale. Although it is five years later for Josie, Murray says she is not that different from her days singing with the Pussycats. “She’s still young; she’s still a kid. And she’s definitely a new kid on the block in New York. And I think just leaning into that fun, wide-eyed venture is where I’m starting out with Josie,” she says.

Much of the music comes through Josie, who did get to show off some of her chops in “Riverdale,” but is now delivering both cover songs and originals regularly in “Katy Keene.”

“If we want to get into what Josie’s going through and her psychology, we work with a songwriter who reads all of the scripts and gets in deep with Josie for her original music. If we can find a great song that speaks to our story, we make sure it speaks to the specific character in that moment but is also globally-driven,” Grassi says. As time goes on, more characters will sing, as well, especially Jorge/Ginger.

Similar to the “Arrowverse” superhero dramas on the CW, the worlds of the “Archieverse” are interconnected and characters can and will cross over between shows. Since “Katy Keene” is set in the future, the writers’ rooms stay in close contact about what references can be made in that show, knowing those events become canon, whether or not they ever play out on-screen in the other shows. In order to better set “Katy Keene” up for success, Hale’s Katy will appear in the Feb. 5 episode of “Riverdale.” Entitled “Chapter Sixty-Nine: Men of Honor,” this episode airs the day before “Katy Keene” premieres and sees Veronica (Camila Mendes) “on a shopping spree in New York to get an outfit for a college interview that she has, so she meets up with her friend Katy Keene,” says Aguirre-Sacasa. “We get to see a snapshot of Katy five years prior [to her show] when she was still in high school.”

Similarly, in one of the later episodes of “Katy Keene” this season, Aguirre-Sacasa says, a character from “Riverdale” will visit New York, and “we’ll fill in that the character’s been doing the past five years.” The decision when to cross characters over, he continues, always has to come “organically” from the themes and character journeys in the storytelling. In this case, “it’s the character you’d probably expect to show up in New York,” he says.

In a way, seeing a “Riverdale” character five years in the future on “Katy Keene” may invoke a sense of nostalgia for the audience similar to the way the Archie characters do for those who grew up reading the comics. That feeling is an intentional, baked-in vibe to the show, per Grassi.

“The department store’s a good example: When we were looking at department stores to shoot the pilot, we looked at Bergdorf’s, and when we got there it was a renovated Bergdorf’s and it was light and bright, and we wanted to go back to the nostalgic version we remembered from watching movies about New York or when we visited New York when we were kids — a more romantic version of the city,” he explains.

But also, it’s about the “huge life lessons that change the course of your life,” he says. “Thinking about your time in your ’20s when you’re broke, you have a terrible day job, you’re single and you haven’t made it in your career yet — it’s a hard time in your life, but it’s a wonderful time in your life, too.”