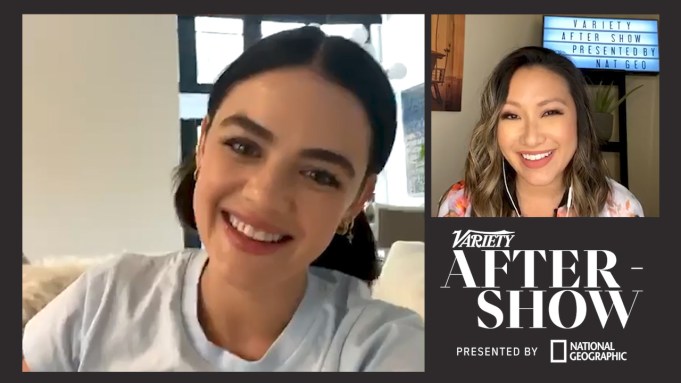 Spoiler alert: Do not read if you have not yet watched the Season 1 finale of “Katy Keene,” titled “Chapter Thirteen: Come Together.”

The Season 1 finale of “Katy Keene” left fans with a major cliffhanger: whether or not Leo Lacy (Cary Elwes in a blink-and-you’ll-miss-it cameo), is Katy’s (Lucy Hale) father, a possibility the budding fashion designer didn’t hesitate to blurt out at episode’s end.

“I love that Katy just jumps in immediately, like, ‘Yeah, yo, you’re my dad,’” Hale said on the Variety After-Show on Instagram Live.

Hale added that Elwes’s character might one of a few “Katy daddy” contenders, a scenario she said she wouldn’t mind seeing play out “Mamma Mia”-style in a future episode, given the show’s musical flair.

“One. Hundred. Percent,” said Hale, to that prospect.

Hale has lent her voice throughout Season 1, topping it off in its final episode with a rendition of Sara Bareilles’s “She Used to Be Mine” from the musical “Waitress.”

Co-stars Jonny Beauchamp (Jorge/Ginger) and Ashleigh Murray (Josie) have also had their share of musical numbers on the show, which is based on a 1940s comic book character and centers on the lives of four young New Yorkers wading through life in their twenties.

Hale says the diversity of the show has been its strength.

“When I was growing up, there wasn’t a show with a gay male lead who dresses in drag. The show is about being your most authentic self, so I’m glad that The CW and our writers and producers have allowed these characters to shine,” said Hale. “One day, hopefully, we won’t even have to have conversations about it being normal or not normal [to see on TV], but for right now, there are people who need to see those characters because it makes them feel not as alone.”

But the fate of those characters is still up in the air, as the CW has not yet renewed the show for a sophomore season. The uncertainty can be unsettling, Hale admitted.

“I’ve been acting professionally for 15 years, and it keeps me up at night,” the 30-year-old revealed.

In the meantime, the former “Pretty Little Liars” star is socially distancing at home in Los Angeles, where she has been baking (poorly, she said) and bingeing on shows including “Outlander” and “Tiger King.” She even has a new career goal.

“I wanna be in a Joe Exotic music video,” she said, deadpan. “That’s what I want to do.”

Watch the full interview with Lucy Hale on the “Variety After-Show” above.