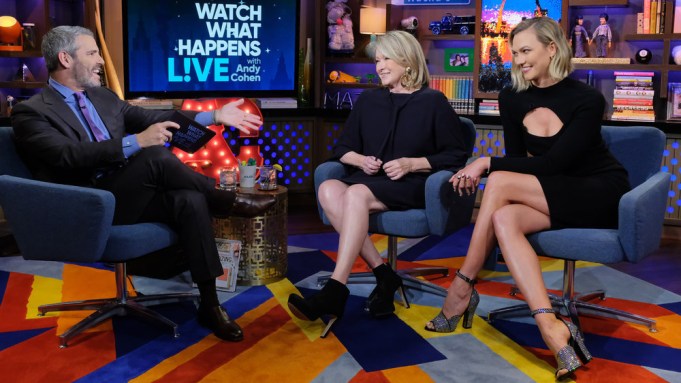 Andy Cohen wasted no time addressing the elephant in the room when Karlie Kloss visited “Watch What Happens Live” on Thursday night.

Though Kloss “was honored to be one of the first memes of the decade” — referring to her now-viral moment with booted “Project Runway” contestant Tyler Neasloney, who referenced her in-laws, the Kushners, on the show — she said the real tragedy of the situation was “how terrible that dress was. I would not wear that dress to any dinner.”

When judge Brandon Maxwell said in a recent episode that Kloss wouldn’t wear Neasloney’s design “anywhere” (the challenge was to make something for the model to wear to an event in Paris), Neasloney quipped, “Not even to dinner with the Kushners?”

Cohen pushed Kloss a little harder, asking, “Are you on the same page politically with the family?”

“Andy, I’m sure I’m not the only person in this country who does not necessarily agree with their family on politics,” she responded, warranting fellow guest Martha Stewart’s stamp of approval. “I voted as a Democrat in 2016 and I plan to do the same in 2020.”

“I love that you announced that,” Stewart said.

Later, Kloss elaborated on her relationship with Kushner, reminding viewers that she met him in 2012 when she was 19 years old.

“It was a different world,” she said. “And my man and I have been through a lot together. I’m so proud that he’s my partner. It’s not been easy, but it’s worth it, you know? And I would make that same decision a million times again.”

That answer seemed to satisfy Cohen enough. “Thank you for humoring me,” he told Kloss before cutting to a commercial break.