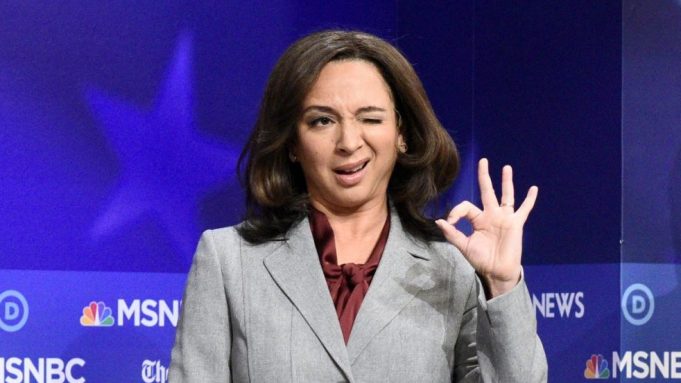 Courtesy of Will Heath/NBC

When the news broke that Joe Biden selected Senator Kamala Harris as his vice-presidential running mate for the 2020 presidential election, one of the most immediate reactions could be summed up by this tweet from NBC News White House correspondent Geoff Bennett:

A big day for Maya Rudolph

During the Democratic primary, Rudolph’s joyful performances as Harris were a standout on “Saturday Night Live,” even earning Rudolph an Emmy nomination for best guest star on a comedy.

When Biden announced Harris as his pick, Rudolph happened to be in an interview with Entertainment Weekly about her Emmy nomination.

Rudolph told EW that she was “as surprised as you are” about Harris’ selection as VP, and she indicated that she would return to play the California senator on the upcoming season of “SNL,” if executive producer Lorne Michaels asks her and COVID-19 precautions allow.

“I just didn’t really anticipate traveling during this pandemic, but if there’s anyone who can work it out I’m sure Lorne has some kind of invisible helicopter that can get me there,” she said. “I don’t know that I’m ready to go right this minute, but it’s so nice to have this nomination be associated with the show because it’s my true love.”

Rudolph, who was a cast member on “SNL” from 2000–2007, has regularly returned to the show to play several famous figures like Beyoncé, Whitney Houston and Michelle Obama. Rudolph played Harris three times in 2019, most recently on the episode hosted by Eddie Murphy — which earned her the Emmy nomination.

In an interview with Variety conducted before Harris landed the VP slot, Rudolph said she prefers to approach her impersonations inclusively, rather than make them the butt of the joke.

“I like to look for the joy and the fun and the game in something they say or do,” she said.